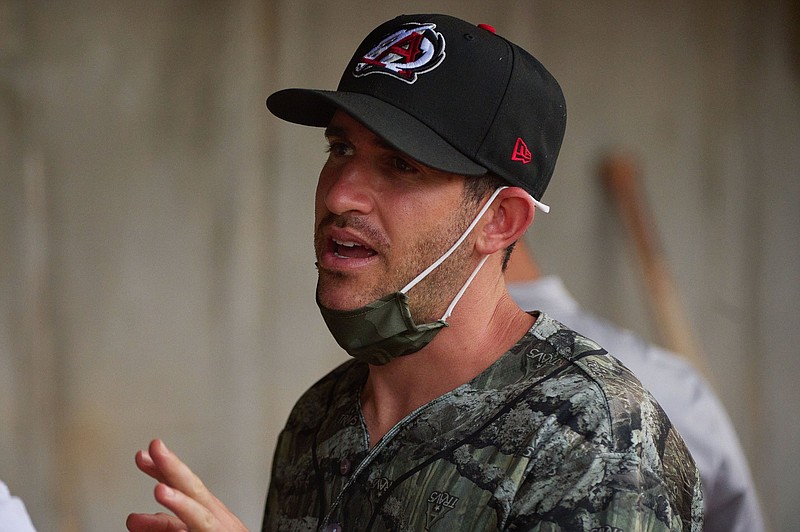 Arkansas Travelers pitching coach Alon Leichman will represent his native Israel in the Tokyo Olympics. “We’re definitely building toward growing the game back home and the World Baseball Classic has helped us do that, for sure, getting more awareness,” Leichman said. “Now that the baseball team is going [to the Olympics] — we haven’t had a team sport go in 45 years — it’s a big deal back home.” (Arkansas Travelers/Mark Wagner)

Alon Leichman wasn't going to believe it until he was in the air.

"I need to be on that plane to Tokyo," Leichman said earlier this month after wrapping up his final pre-Olympic bullpen session in North Little Rock.

Perhaps the Arkansas Travelers' first-year pitching coach needed that certainty after the Olympics were postponed last summer. It certainly didn't help that covid-19 cases in Japan have been on the rise in recent weeks, putting the Games in jeopardy yet again.

In reality, Leichman's been waiting 22 years for this moment, so another 12 months were marginal.

"I've been representing Israel since 1999 when I was 10, that was my first one when we went to Amsterdam," Leichman said. "To think 22 years later we're going to the Olympics, it's amazing."

Leichman's Olympic adventure begins July 29 as Israel's baseball team kicks off pool play with a matchup against South Korea. Israel will then face off against the United States at 5 a.m. July 30, and it will be guaranteed at least two more matchups once all six teams advance to double-elimination knockout play, which starts Aug. 1.

In no way was the road to Tokyo straightforward, especially for Leichman.

After a nine-year baseball journey -- three years training as an "outstanding athlete" while serving a mandatory three years in the Israeli Army, then three seasons each at Cypress College and Division II California-San Diego -- it appeared as if Leichman's playing days were done.

He'd once undergone Tommy John surgery in 2011 and potentially needed it again after suffering another arm injury in his final season with the Tritons.

Not ready to step away from the game for good, Leichman took on the role of bullpen coach, helping Israel reach the second round of the 2017 World Baseball Classic -- a high-water mark after failing to qualify in the first three editions of the event.

Israel parlayed that into just enough success at the European Championship Pool-B qualifier later in 2017. Although the Israelis didn't earn their spot then, they stayed alive to play their way into the tournament.

That gave Leichman time to heal up, and by the time Team Israel returned to the field in July 2019, the then 30-year-old decided he wanted to return to the bump and try to help his homeland reach the Olympics as a player.

By beating Russia in their group final and Lithuania in a best-of-three series in July 2019, Leichman and Team Israel clinched the last spot in the September 2019 European Championships.

That was only half the battle.

Israel then had to finish in the top five at that tournament to qualify for the Africa/Europe Olympic Qualifying Event later that month -- and it did, beating France in the quarterfinals to guarantee no worse than fourth place.

The payoff eventually came in the northern Italian towns of Parma and Bologna, when Leichiman and the Israelis went 4-1 in round-robin play, edging out the Netherlands for one of just six spots in the Tokyo Olympics.

As eager as Leichman was for the Games a year ago, the extra time has proven helpful for him to step onto the biggest stage of his baseball career.

"It's been a roller coaster, but for me, I take it as a positive for sure," Leichman said. "I get to face Double-A hitters to get ready, so it's been a unique opportunity for me. Obviously, I've never done that before but it's good competition -- a lot of trash talk and it gets the juices going."

Wearing a blue-and-white T-shirt, Leichman doesn't hesitate to put his players through the paces. Although he never played in the majors or minors, he's got a slider that could keep hitters off balance -- especially if he comes out of the bullpen as expected in Tokyo.

Leichman will get to don his nation's colors alongside several former major-leaguers. Danny Valencia, Ian Kinsler and Ty Kelly will scatter around Israel's infield, with Ryan Lavarnway behind the plate and Josh Zeid on the mound.

It's not even clear if Leichman will see action -- he's one of three pitchers of Israel's 12 on the wrong side of 30.

But no matter. He was able to get on the plane.

"We're definitely building toward growing the game back home and the World Baseball Classic has helped us do that, for sure, getting more awareness," Leichman said. "Now that the baseball team is going [to the Olympics] -- we haven't had a team sport go in 45 years -- it's a big deal back home."

CORRECTION: Alon Leichman and Israel begin Olympic baseball play July 29 against South Korea. Israel will then play the United States on July 30, with the double-elimination round scheduled to start Aug. 1. An earlier version of this story listed incorrect dates for the games.