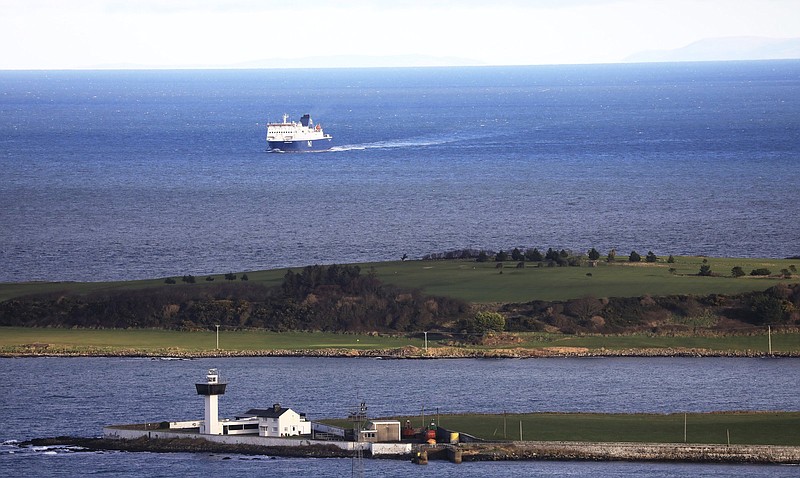 A ferry from Scotland crosses the Irish Sea to the port at Larne on the north coast of Northern Ireland in this file photo. Tense post-Brexit relations between Britain and the European Union faced further strain on Wednesday when the U.K. called for changes to traderules agreed on by both sides. Video available at arkansasonline.com/722brexit/. (AP)

LONDON -- The British government said Wednesday that post-Brexit trade rules it negotiated with the European Union "cannot go on" and need a major rewrite, straining already tense U.K.-EU relations and drawing a message of concern from the U.S. government.

The government said Britain would be justified in unilaterally suspending the legally binding Brexit agreement but had decided not to do so just yet.

Since the U.K. left the EU's economic embrace at the end of 2020, relations have soured over trade arrangements for Northern Ireland, the only part of the United Kingdom that has a land border with the 27-nation bloc. The divorce deal the two sides struck before Britain's departure means customs and border checks must be conducted on some goods moving between Northern Ireland and the rest of the U.K.

[Video not showing up above? Click here to watch » https://www.youtube.com/watch?v=bQcDoJNMfus]

Britain accuses the EU of taking a "purist" approach to the rules that is causing unnecessary red tape for businesses, and has called for the bloc to show "pragmatism."

Brexit minister David Frost said Britain had tried to implement the arrangements "in good faith" but that they were causing a severe burden on businesses and society in Northern Ireland.

"Put very simply, we cannot go on as we are," he said Wednesday in Parliament's upper chamber, the House of Lords.

Frost said "the circumstances exist to justify the use of Article 16," an emergency brake in the agreement allowing for it to be suspended by one side in extreme circumstances.

"Nevertheless, we have concluded that this is not the right moment to do so," he said.

Triggering Article 16 would likely send relations between the EU and its former member into a tailspin. The bloc is already frustrated at what it sees as Britain's failure to implement the agreement it signed up to.

The bloc's lead Brexit official, Maros Sefcovic, said the EU is "ready to seek creative solutions" but "will not agree to a renegotiation of the Protocol," as the Northern Ireland section of the Brexit deal is known.

The EU says Prime Minister Boris Johnson's government knew full well that there would be checks when it signed the Brexit deal.

"Britain decided itself to leave the single market of the European Union, to apply trade rules, to apply red tape to its goods that are leaving Britain, to goods that are coming into Britain," Irish European affairs minister Thomas Byrne said.

Frost said Britain was seeking a "standstill period" in which grace periods delaying the imposition of some checks and goods restrictions would be maintained while a permanent solution is found. Ultimately, Britain is seeking to remove most checks, replacing them with a "light touch" system in which only goods at risk of entering the EU would be inspected. But the low level of trust between the two sides makes that difficult.

U.S. President Joe Biden has even been drawn into the dispute, raising concerns about the potential threat to Northern Ireland's peace accord.

State Department spokesman Ned Price on Wednesday stressed Biden's "unequivocal" support for Northern Ireland's 1998 peace accord and said the administration "encouraged all parties to prioritize political and economic stability in Northern Ireland's in the context of these discussions."

"We support a close relationship between the U.K. and the EU, and between all communities in Northern Ireland as well," Price said. "And we continue to encourage the parties to negotiate within existing mechanisms and to avoid unilateral actions."

Last month, Britain and the EU gave themselves breathing time by delaying until the end of September a ban on chilled meats such as sausages from England, Scotland and Wales going to Northern Ireland.

The "sausage war" has been the highest-profile element of the U.K.-EU dispute, raising fears that Northern Ireland supermarkets may not be able to sell British sausages, a breakfast staple.

Archie Norman, chairman of food and fashion chain Marks and Spencer, said the new rules mean there would be "gaps on the shelves" in Northern Ireland at Christmas.

"This Christmas, I can tell you already, we're having to make decisions to delist product for Northern Ireland because it's simply not worth the risk of trying to get it through," he told the BBC.

"These endless games are shredding our international reputation," she said.