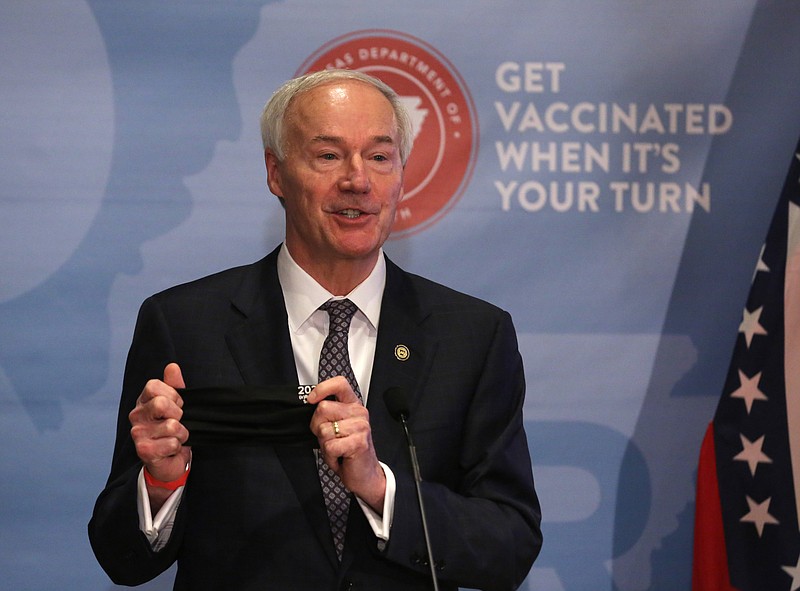 Gov. Asa Hutchinson holds up a mask, saying he would keep wearing his despite his lifting of the statewide mask mandate, during the weekly COVID-19 briefing on Tuesday, March 30, at the state Capitol in Little Rock. (Arkansas Democrat-Gazette/Thomas Metthe)

WASHINGTON -- With classrooms about to reopen, counteracting the delta variant must be a top priority, Arkansas Gov. Asa Hutchinson told the Reagan Institute Summit on Education on Thursday.

Mask mandates won't be one of the tools in the state's anti-covid arsenal, he said.

The number of new coronavirus infections is roughly double what they were a year ago as the delta variant spreads, state public health data shows.

"Arkansas got hit very, very early on [with the delta variant]. Our cases are high right now. Our hospitalizations are high," Hutchinson said during a session titled "The State of Education: Arkansas."

"We were at a point in Arkansas that we had dipped down to where it [covid-19] was almost a non-issue. Life was normal. And everybody thought it was done with. Well, this covid, once again, surprised us. It came back with a tougher variant that is causing real problems" he said.

"Right now, there's a lot of consternation about the upcoming school year," he said.

Since the start of the pandemic, roughly 1 out of 8 Arkansans has contracted the virus. Thus far, the illness has killed about 1 out of 500 Arkansans.

While Arkansas schools closed in March 2020, they reopened for in-class instruction in the fall, with the ability to switch to virtual learning when necessary.

"That was one of the best decisions that I made that we were able to accomplish in Arkansas," he said.

Covid-19 disruptions have been harmful to students, he said.

"We're now seeing the mental-health consequences, the challenges from isolation, the gap in learning," he said.

"It was the right thing to do to keep the schools going last year," he said.

This week, the American Academy of Pediatrics recommended that staff members and students older than 2 wear masks at school "unless medical or developmental conditions prohibit use."

The U.S. Centers for Disease Control and Prevention is likely to recommend that unvaccinated students wear masks when they return to the classroom, President Joe Biden said this week.

It's a policy that can't be enforced back home, Hutchinson noted.

"Arkansas's a state where we have a prohibition on mask mandates. We don't have vaccination mandates either, which is typical of a Southern independent, rural state. Culturally that's not where we are. We've been through that and we did what we needed to do. So I don't think that's going to be adaptable to our schools this year. I don't think parents are going to tolerate that," he said.

Hutchinson said he hopes the CDC will create another set of guidelines for states that reject mask mandates.

In the meantime, "we're trying to really increase our vaccination rate between now and the time school starts. We're going to have an emphasis on good ventilation. We're going to have some layered public health measures as you go into the classroom. And then, of course, if they're not vaccinated, they should be wearing masks. We just won't be mandating it," he said.

Hutchinson's comments were made during a conversation with moderator Romy Drucker, interim kindergarten-12 education program director with the Walton Family Foundation.

Similar sessions focused on the state of education in Colorado, Arizona, Tennessee and Maryland.

"Arkansas's a rural state and that digital divide is very, very noticeable and problematic," he said.

Thanks to CARES Act and American Rescue Plan dollars, Arkansas finished its fiscal year with a record surplus of $945.7 million.

"With the federal funds coming in ... we're going to be putting hundreds of millions of dollars of that into getting broadband out and reducing that digital divide," he said.

As a candidate, he emphasized the importance of having computer-science education available in all of the state's high schools.

As governor, he also signed legislation requiring high school students to take at least one computer-science class before graduating.

Now that he's chairman of the National Governors Association, Hutchinson said he will be "promoting computer-science education nationwide."