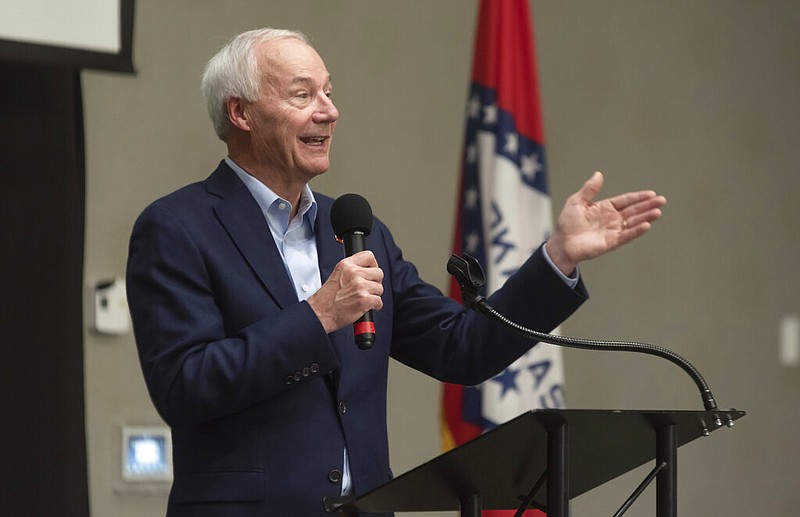 As U.S. regulators weigh giving the final stamp of approval for certain covid-19 vaccines, governors in states hard hit by the pandemic hope the move will help persuade the many holdouts in their states to finally get the shot.

The governors of Arkansas and Ohio — where cases and hospitalizations are climbing — have appealed publicly in recent days for full approval, saying it would help combat vaccine hesitancy and could also clear the way for more businesses to require their employees to be inoculated.

It's a topic that Republican Gov. Asa Hutchinson has confronted as he holds town halls throughout Arkansas, which leads the nation in new cases per capita but has one of the lowest vaccination rates. Only about 35% of the state's population is fully vaccinated.

"Anytime you have low vaccination rates, you want to eliminate every objection that people have, and one of the objections that's been expressed is that this is only approved under emergency use authorization," said Hutchinson, who also recently took over as chairman of the National Governors Association.

All three vaccines authorized for use in the U.S. went through a fast-track approval process — but that didn't skip the normal massive testing required of any vaccine. Pfizer and Moderna have applied for full approval, and a Pfizer decision is expected soon.

The Pfizer, Moderna and Johnson & Johnson vaccines were studied in tens of thousands of people to show they prevented symptomatic coronavirus infections — especially serious illness —- and that they were safe. Once widespread use began, the Food and Drug Administration and the U.S. Centers for Disease Control and Prevention beefed up usual surveillance to catch any side effects too rare to have occurred in even those large studies.

The FDA's acting commissioner, Dr. Janet Woodcock, was asked by a Senate committee this week about people hesitant to get a vaccine that wasn't fully approved.

"We did not cut any corners," she replied. "Compared to other vaccines they'd be looking at, these have really gotten the full-court press as far as evaluation and study."

In Ohio, with less than half the population vaccinated, Republican Gov. Mike DeWine has been exhausting every avenue to get shots in people's arms. The state recently completed a five-week $1 million lottery drawing for adults or a full-ride scholarship to a Ohio university for those under 18 who receive their first covid-19 shot.

Last week, DeWine announced plans for an incentive that gives smaller amounts of money to increase the odds of more people winning. But that's on hold as the governor and his administration urge full FDA approval to appease a segment of the unvaccinated community who might budge.

"That is one of the stated reasons that we hear most often from people who are not getting vaccinated," DeWine said of his conversations with residents across the state. "And my concern is that the FDA not moving from emergency use to full approval, some people are not being vaccinated who would be vaccinated and those people are going to die."

In Kansas, Democratic Gov. Laura Kelly has pinned hopes of avoiding renewed mask mandates and other restrictions on getting more people vaccinated. After a call with governors and the White House this week, she said the Biden administration is "fully aware" that governors want full approval of the covid-19 vaccines.

"It would eliminate one variable that seems to be used as an excuse to not get vaccinated," Kelly said.

The governors' efforts are happening against the backdrop of rising cases in every state due to the rampant spread of the delta variant.

At the same time, lawmakers in GOP-controlled legislatures are moving forward with legislation that limits businesses' and schools' ability to mandate vaccines, specifically targeting covid-19 vaccines that haven't yet received the full FDA stamp of approval.

In Ohio, GOP Sen. Andrew Brenner pushed through a last-minute provision that would prohibit state public schools and universities from mandating vaccines without full FDA approval.

"When I introduced this amendment, I'm looking at it from individual liberty," Brenner said. But, he added, "while it has been given emergency use authorization, typical vaccines take about 10 years of trials and testing to know the side effects and everything."

However, the covid-19 vaccines were the result of more than a decade of behind-the-scenes research and huge injections of funding that laid the groundwork for them to be rolled out so quickly.

Hutchinson noted full approval of the vaccines could encourage more hospitals and businesses to require vaccinations.

The FDA has never before had as much evidence to use in deciding whether to approve a vaccine as it has for the Pfizer and Moderna shots. More than 188 million doses of the Pfizer-BioNTech vaccine have been given in the U.S., and more than 137 million doses of the Moderna vaccine. The FDA also can consider evidence from multiple other countries that are successfully using the shots.

Pfizer recently announced that the FDA deemed its application eligible for "priority review" and would decide no later than January. But the agency is widely expected to finish its work far sooner.

Health experts say they view the holdouts awaiting full approval as more reachable than others clinging to misinformation or those who are outright hostile about vaccines.

"There's clearly a degree of thoughtfulness in understanding the FDA approval process and waiting for that to happen," said Dr. Cam Patterson, chancellor of the University of Arkansas for Medical Sciences, which has been stretched thin by the latest surge in Arkansas cases.

"My hope and my expectation is they will follow that train of logic into the doctor's office to get the shot once the FDA gives full approval for the vaccines."