Red Wolves ready to be starting over 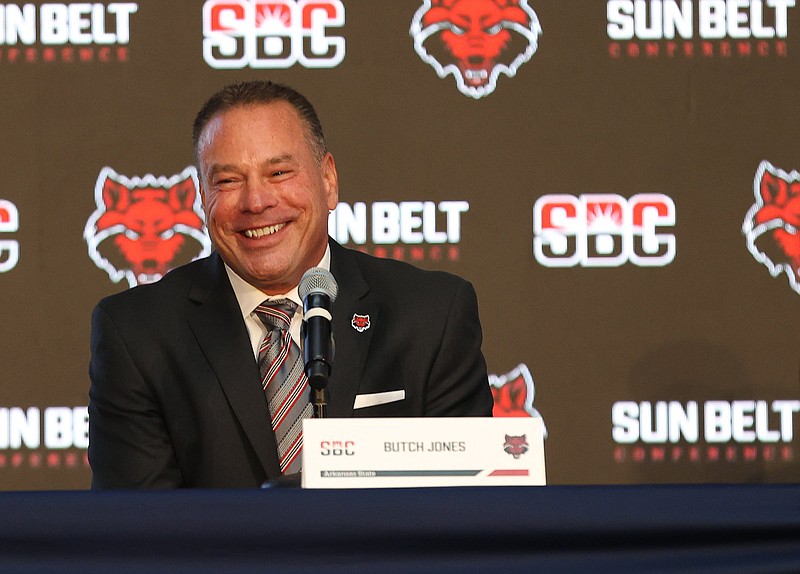 At Sun Belt Conference Football Media Day -- which took place at the Sheraton New Orleans on Thursday -- each coach got to choose the music that played while they walked in. Arkansas State University's Butch Jones stuck closer to home, selecting the ASU fight song.

"It's a pride of who we are," Jones said. "That's Arkansas State. We want to do everything with class and dignity ... so why not go with that?"

The fight song accompanied the Red Wolves' first-year head coach to the stage, and between his podium time and a session with local reporters, Jones spoke on the Sun Belt, roster depth, ASU's quarterback situation and progress made since the 53-year old's December arrival. With him were offensive guard Andre Harris and pass rusher TW Ayers.

"Everybody is just anxious to start putting it all together," Ayers said. "We're ready to see how this team starts shaping up."

Jones assumed control of ASU following a 4-7 finish in 2020, when the Red Wolves closed with a losing record under Blake Anderson and without a bowl appearance for the first time since 2010.

Upon his arrival, Jones said the Red Wolves needed more toughness, physicality and competitive depth, some of which was added in the weight room under the leadership of sports performance coach Jeff Jones -- who the head coach referenced several times Thursday. More of it has come in the form of new arrivals. When ASU updated its roster Wednesday, it featured 59 newcomers between transfers, scholarship recruits in the class of 2021 and walk-ons.

"I think from a competitive component, you look at every position group and we feel like we've been able to address the needs," Jones said. "Maybe more so in some places than others. But I think our whole program has more of a competitive edge to it."

Jones' first eight months have also seen a new culture within the program, and he credited "veteran players" such as Ayers and Harris for helping instill into the newcomers the principles Jones and his staff have installed. According to Ayers, the disappointing results of the 2020 season left those who endured it eager to buy-in to a new system and willing to welcome the change that has come with so many new faces.

"It feels like a whole new program in a positive way," said Harris, sharing a similar sentiment. "We're all here for the same goal. We all went 4-7 last year. We don't want to do that again."

Asked about what attracted him to ASU, Jones pointed to the leadership of the university, its facilities and its commitment to doing things "the right way." On the Sun Belt, he said the level of competition and quality of coaching were what pulled him to the Red Wolves from his assistant's role at Alabama.

"I always like to fact check," Jones said. "You look at the facts behind the Sun Belt conference, I think it's one of the most competitive conference's in the country."

According to Jones, football not only in the Sun Belt but across the NCAA is about the line of scrimmage, which is why the Red Wolves added so heavily on the offensive line and the defensive front, where ASU will deploy an altered, four-down defensive scheme in 2021.

Offensively this fall, Jones aims to improve an ASU running game led by Marcel Murray in a dynamic attack that will feature run-options and play-actions in the passing game.

Blackman, who threw 43 touchdowns in 31 games for the Seminoles from 2017-20, poses Hatcher's strongest competition. On stage in New Orleans, Jones laid out the criteria for the quarterback he'll start against the University of Central Arkansas on Sept. 4.

"It comes down to winning football and that means consistency in performance," he said. "It's [going to be] the individual who can manage the game. At the quarterback position, you don't have to win the game. We have enough talented players around them. They just have to manage the game and get us in the right situation and not make catastrophic mistakes."

For all of the turnover, ASU was picked to finish second in the Sun Belt West in the conference's preseason poll earlier this week, earning one first-place vote behind Louisiana-Lafayette. At the end of offseason Jones called a "long road", there's confidence about where the Red Wolves stand with the core values and sense of urgency he's imprinted, along with a revamped roster.

None of that optimism comes from a preseason poll for Jones.

"I've never paid any attention to those," he said. "It's not where you start, it's where you finish. It's a mindset of focusing on a process and worrying on the things we can control. We just have to control getting better as a football program."

Print Headline: Red Wolves ready to be starting over