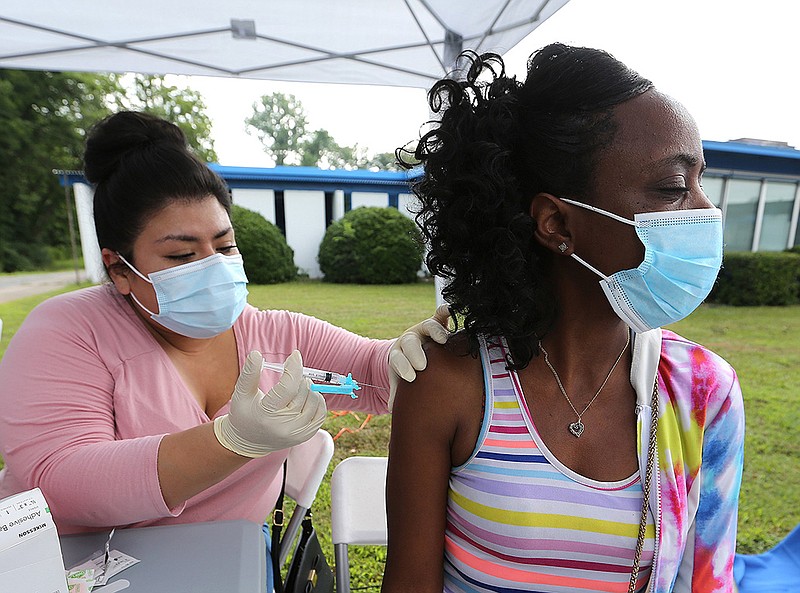 Jenifer Benitez, a nurse with the Arkansas Foundation for Medical Care, gives Rokenya Boykins a shot of the Johnson & Johnson vaccine Thursday during a job fair at the Watershed Family Resource Center in Little Rock. Arkansas Department of Health figures continue to show an uptick in the state’s vaccinations. (Arkansas Democrat-Gazette/Thomas Metthe)

The number of coronavirus patients in Arkansas hospitals grew Thursday as the state's count of cases rose by 1,860 -- the second-largest number of new cases in a single day since early February.

The state's death toll from the virus, as tracked by the Department of Health, rose by 15, to 6,035.

Gov. Asa Hutchinson tied the recent surge in cases, linked to the fast-spreading delta variant, to an uptick in vaccinations over the past several days.

"The Delta Variant alarm bells are creating a greater sense of urgency to get vaccinated," Hutchinson said in a tweet.

"We have another day with the administration of over 9,000 vaccine doses, but let's do even more for the safety of our children and families."

Despite the increased pace, however, it appeared likely that tens of thousands of doses of vaccine would not be used before their expiration dates at the end of next week.

Except for a spike of 1,875 cases Tuesday, the new-cases number Thursday was the largest since Feb. 4.

Already at its highest level since the week ending Feb. 10, the average number of cases added to the state's count each day over a rolling seven-day period rose to 1,298.

On Thursday, at their highest level since Feb. 3, the number of covid-19 patients in the state's hospitals rose by one, to 849.

It was the 17th day in a row that the number had increased.

The number of covid-19 patients who were on ventilators rose by two, to 158, the largest number since Jan. 26.

After rising to its highest level since Jan. 26 a day earlier, the number of people in intensive care units remained at 334.

With new cases outpacing recoveries, the number of cases that were considered active rose by 876, to 12,779, the largest number since Feb. 11.

State Epidemiologist Jennifer Dillaha said Arkansans are being infected "wherever they are having social gatherings, especially if they are unvaccinated and not wearing masks and not practicing social distancing."

The growing number of covid-19 patients in the state's hospitals is particularly worrisome, she said.

"We were fortunate that we didn't have a great increase [in hospitalizations] today, but hospitals are really full, and this is not a good thing for people who may need to go to the hospital for other reasons," she said.

"So it's very likely the delta variant is driving this steep increase in cases," Dillaha said.

With new cases rising nationwide, U.S. Centers for Disease Control and Prevention rankings Thursday showed two other states -- Louisiana and Florida -- surpassing Arkansas for the first time this week in new cases per capita over a rolling seven-day period.

In new covid-19 deaths per capita, Arkansas was roughly tied with Louisiana for having the second-highest rate.

The rise in cases in Arkansas and nationally prompted Arkansas Children's Hospital to announce a vaccination requirement for some of its employees.

Chief Executive Officer Marcy Doderer said in an email to employees Thursday morning that the health system would require its upper-level staff members to receive at least one vaccine dose by Aug. 20 and be fully vaccinated by Sept. 30.

In addition, she said new employees, starting Aug. 16, will be required to have had at least one vaccine dose by their start date and a second dose within the following 30 days.

"At Arkansas Children's we are nearing capacity with Respiratory Syncytial Virus (RSV) and treating a rising number of COVID patients," Doderer said in the email.

The health system, which includes Arkansas Children's Hospital in Little Rock and Arkansas Children's Northwest in Springdale, "will continue to follow and comply with its policy and practice of accommodating religious and medical exemptions," she said.

She said 90% of the system's leadership is already vaccinated.

She said the system's hospitals had 12 covid-19 patients Thursday, including four who were on ventilators and seven in intensive care.

Arkansas Children's is at least the third Arkansas health care provider to announce a vaccination requirement for employees.

The Missouri-based Mercy health system, which has hospitals in Rogers, Fort Smith and Berryville, announced earlier this month that its employees will have to be vaccinated by Sept. 30.

Medical Associates of Northwest Arkansas, which has 22 clinics in Benton, Washington and Boone counties, set the same requirement and deadline last week for its employees.

Little Rock-based Baptist Health doesn't have a vaccination requirement but hasn't ruled one out, spokeswoman Cara Wade said in an email.

She said 66% of the system's bedside nurses and 75% of its physicians were vaccinated by the health system.

"We feel confident that the true number of vaccinated employees is actually higher because we are learning that many received their vaccine elsewhere," Wade said.

The University of Arkansas for Medical Sciences also doesn't have such a requirement, spokeswoman Leslie Taylor said. She said 87% of UAMS employees are vaccinated.

"Because we're a state entity, we would need to ask the Legislature" to approve a vaccination requirement, Taylor said.

Act 1030, which also passed during the session, will prohibit state or local government entities from requiring vaccination documentation "for any purpose" when it takes effect next week.

Meanwhile, a Health Department report indicated that more than 107,000 unused vaccine doses in Arkansas have approaching expiration dates this month, including almost 102,000 doses of Pfizer. Those are set to expire at the end of next week.

Using all of the doses before July 31 would require the pace of vaccinations in the state to significantly accelerate.

In the week ending Thursday, Arkansas providers had administered an average of 4,438 Pfizer doses a day, putting them on track to administer about 40,000 more doses by the end of the month, according to data from the CDC.

Dimming the outlook further, only a portion of those doses would be coming from the state's inventory. The CDC's figures also include doses administered through federal programs and entities that have their own supplies.

"I'm hoping that a significant proportion can be used, and my other hope is that the expiration date could possibly be extended into the future," Dillaha said.

"It's likely that if things stay at the same rate of vaccination and the expiration date doesn't move, then we will have a fair amount of vaccine we'll not be able to use in Arkansas."

States faced a similar situation last month, when millions of Johnson & Johnson doses, including tens of thousands in Arkansas, were to expire.

The states received extra time to use those when the company announced June 10 that the shelf life had been extended by six weeks.

Any doses that have already been delivered to providers will have to be discarded once they expire, Dillaha said.

Doses that have remained at the Health Department's headquarters in Little Rock will be stored so they can be used later if the shelf life is extended, she said.

"It makes me feel really sad," Dillaha said of the prospect of losing vaccine doses to expiration.

"I'm sad because vaccines in the vial don't help anyone. It's vaccination that makes a difference, and it means that we will have lost an opportunity to vaccinate a lot of people in a timely way."

As of late last week, 8,114 vaccine doses had been lost to expiration -- either because they hadn't been used by their expiration dates or too much time had elapsed since they were thawed, according to a Health Department report.

An additional 42,084 doses had to be discarded after being left unused in a vial or syringe.

That was an increase of more than 28,000 from the number of doses that had been discarded for that reason as of late May.

"What we've been doing is giving vaccination providers the leeway to vaccinate a single person," even if it means using just one dose from a vial containing five to 10 doses, Dillaha said.

"It's better to waste a vial than to not vaccinate a person," she said.

The White House announced Thursday that it had awarded $100 million in American Rescue Plan Act funds to almost 2,000 rural health clinics nationwide, including 59 in Arkansas, to promote vaccinations.

The Arkansas clinics will receive a total of $2.9 million in grants.

At 9,268, the increase Thursday in the number of vaccine doses that had been administered in Arkansas, including second doses of the Pfizer and Moderna vaccines, was bigger by more than 3,600 than a week earlier, according to Health Department figures.

The average number of doses administered each day over a rolling seven-day period rose to 7,623, the largest number since the week ending May 27.

According to the CDC, the number of Arkansas who had received at least one vaccine dose rose by 7,548.

That was larger by more than 3,200 than the increase a week earlier.

The average daily increase in the number of Arkansans who had received at least one vaccine dose rose to 5,252, its highest level since the week ending April 27.

The increase Thursday brought the number to 1,345,766, representing about 44.6% of the state's population.

Nationally, 56.4% of people had received at least one dose, and 48.8% were fully vaccinated.

All of the covid-19 deaths reported Thursday happened within the past month, Dillaha said.

She said 14.1% of the state's coronavirus tests were positive during the seven-day span ending Wednesday, up slightly from the 13.5% that was initially reported for the week ending Wednesday.

Pulaski County had the most new cases at 263, followed by Benton County with 144, and Saline County with 117.

Within the state prison system, the McPherson Unit near Newport and the Omega Supervision Sanction Center in Malvern each had two new cases, said Janie Runkle, a spokeswoman for the Department of Corrections.

The Malvern lockup had a total of 28 active cases among inmates as of Thursday, she said. The McPherson Unit had three.

The number of people who have ever been hospitalized in the state with confirmed covid-19 grew by 70, to 18,019.

The number who have ever been on ventilators with covid-19 rose by four, to 1,834.