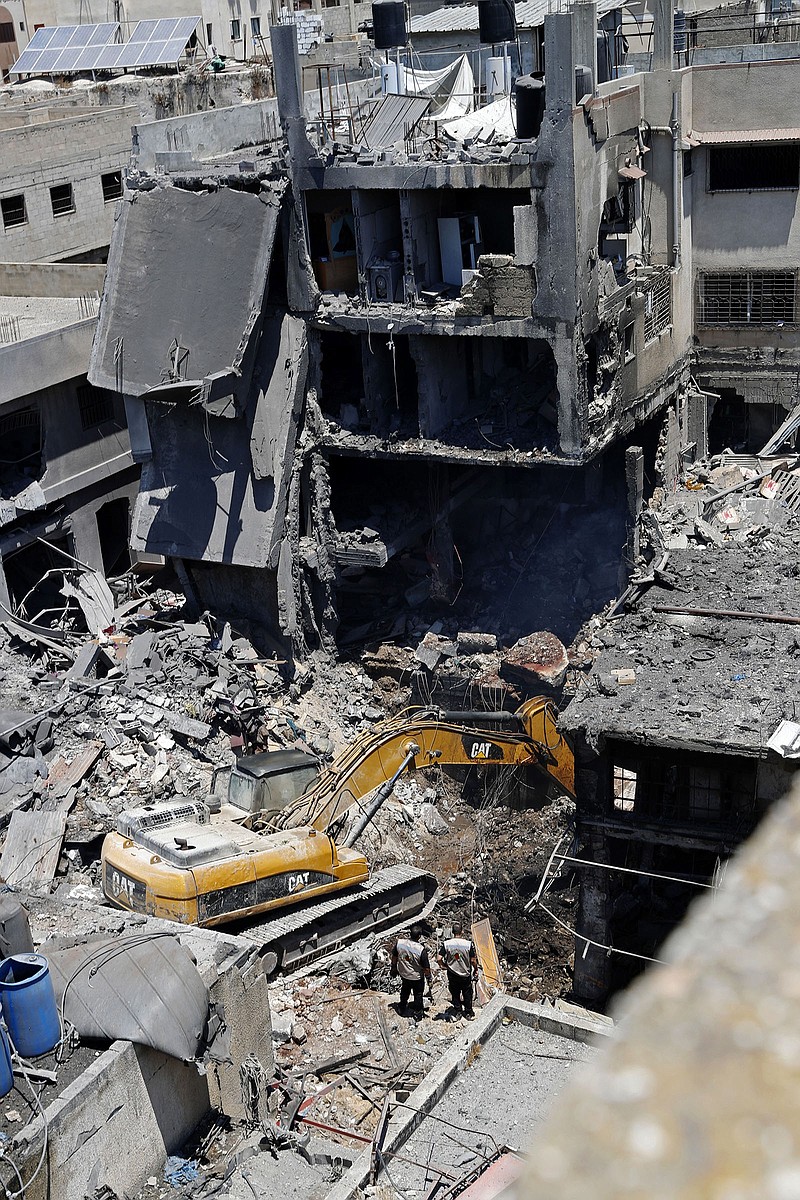 Palestinian security officers watch as a mechanical digger removes rubble Thursday at the site of an explosion in the Al-Zawiya market in Gaza City. More photos at arkansasonline.com/723gazablast/. (AP/Adel Hana)

GAZA CITY, Gaza Strip — An explosion tore through a house in a popular market Thursday in the Gaza Strip, killing one person and wounding 10, the Palestinian territory’s Interior Ministry said.

It was not immediately clear what caused the explosion.

The blast in the Al-Zawiya area collapsed large parts of the house and damaged dozens of buildings and shops nearby, according to the statement. Explosives engineering teams were investigating; civil defense teams and the police were able to control the ensuing fire.

The blast shook the neighborhood on the third day of Eid al-Adha, a Muslim holiday.

The Israeli army signaled that it wasn’t involved, calling the explosion an “internal” matter in Gaza.

Gaza City already is struggling with heavy damage sustained from an 11-day conflict in May between Israel and Gaza’s militant Hamas rulers. At least 254 people were killed in Gaza during the fighting, including 67 children, according to the Gaza health ministry. Hamas has acknowledged the deaths of 80 militants. Twelve civilians, including two children, were killed in Israel, along with one soldier.

BEIJING — The bodies of all 14 workers trapped when a tunnel under construction was flooded last week have been recovered, authorities in southern China said Thursday.

A brief statement on the Zhuhai city government’s social media site gave no further information about the cause of the July 15 disaster or the deaths.

The Shijingshan tunnel is a section of an expressway under construction that passes beneath a reservoir in the Guangdong province city that lies close to Hong Kong and Macao.

The rescue effort involved divers, remote-controlled submarines and other high-tech equipment, while workers on the surface rushed to pump out water from the tunnel. Work was hampered at times by carbon monoxide fumes from machinery being used in the tunnel as part of the operation.

While the cause remains unclear, reports said an abnormal noise was heard and bits of material started falling off one side of the two-tube tunnel. An evacuation was ordered as water rushed in, but the 14 who died were unable to escape in time.

The construction project appeared to have had safety problems for some time. In March, two workers died in another part of the tunnel.

Violence broke out Wednesday in the main prison in the city of Guayaquil as well as the Latacunga prison in central Ecuador, according to prison authorities.

Nine police officers and 70 prisoners were injured in the fighting. Police have regained control of the prisons.

Police said on Twitter that there had been an escape attempt at the Latacunga prison, but that 65 prisoners were recaptured.

Gustavo Larrea, a former interior minister, said the fighting was among crime groups linked to drug trafficking that have “relative control” of the prisons and seek to control illegal operations on the outside. The prison system and efforts to combat organized crime require an overhaul, he said.

In June, a fight between gangs in a prison in Ecuador killed two people and injured 11. In February, fighting in Ecuadorian prisons killed about 80 prisoners.

HONG KONG — Hong Kong police arrested five trade union members Thursday over children’s books they described as seditious, and a court denied bail for four editors and journalists held on charges of endangering national security, as part of a widening crackdown on dissent in the city.

The five who arrested are members of the General Association of Hong Kong Speech Therapists, according to media reports.

The books feature stories that revolve around a village of sheep that has to deal with wolves from a different village. The sheep take action like going on strike or escaping by boat, according to the synopses published on the association’s website.

Li said that the stories referred to the 12 Hong Kong activists who were arrested at sea while trying to flee the city, after most of them were charged over anti-government protests in 2019. There was also was a story about wolves who are “cruel and try to occupy the area” where the sheep live, and try to kill them, Li said.

“Of course, when we prosecute the case, we are not the one to prove that these materials have actually caused the inciting to others,” said Li.

The publishing of such books “brings hatred against the government and administration of justice, and [incites] violence to others,” Li said. He added that the books targeted children between ages 4 and 7.