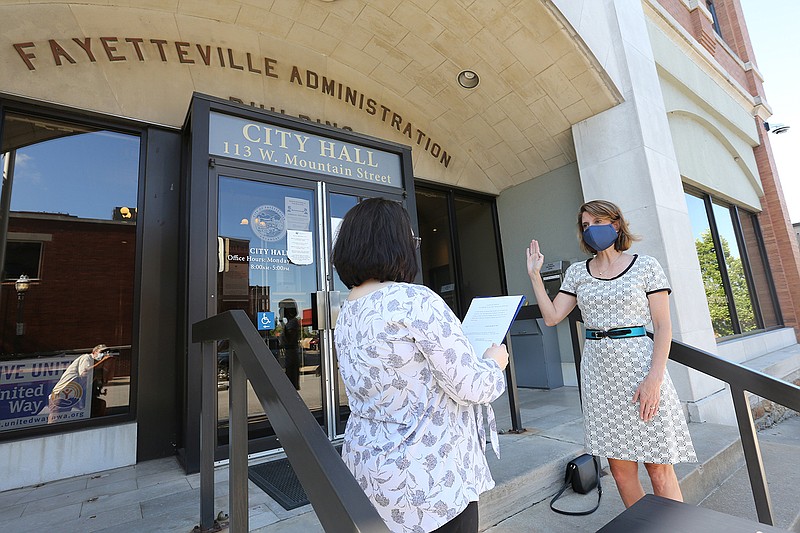 Kara Paxton (left), city clerk treasurer with the city of Fayetteville, administers the oath of office Friday, July 24, 2020, to Dr. Marti Sharkey as the city's public health officer on the steps of City Hall in Fayetteville. Sharkey, a pediatrician with a background in infectious diseases, will serve at the behest of the city's newly re-established board of health, which is advising administrators during the pandemic. Check out nwaonline.com/200725Daily/ and nwadg.com/photos for a photo gallery. (NWA Democrat-Gazette/David Gottschalk)

FAYETTEVILLE -- The city's Board of Health wants the City Council to make the public health officer a paid position.

The board met Friday to review a draft job description and the steps required to make the public health officer a paid, contracted position for a year.

Marti Sharkey, a pediatrician with a background in public health, has served in the role on a volunteer basis since the board selected her to the position and the council affirmed in late July 2020. Sharkey recused herself from Friday's discussion.

Sharkey wrote a letter to Mayor Lioneld Jordan on July 13 saying the city's public health efforts need more money behind them. The resolution the council approved last year reestablishing the position and the Board of Health included $50,000 for staffing, supplies and other needs. The board and the position existed for decades until 2018, when the council dissolved both for a lack of items to discuss. The city health officer historically has been an unpaid position.

So far, $13,094 of the $50,000 has been spent, Chief Financial Officer Paul Becker said. Of the amount spent, $11,375 was used to buy an ultra-cold freezer for covid-19 vaccine storage and the remaining $1,719 bought supplies for vaccination clinic events at the Fayetteville Town Center.

Sharkey said she declined compensation for her work originally because she wanted the money to go toward combating the coronavirus and thought the pandemic would last only a few months.

More than a year later, it's clear the virus and the need for a full-time public health officer will continue into the foreseeable future, the board agreed Friday.

The delta variant has become the predominant covid-19 strain nationwide, including in Northwest Arkansas. Benton and Washington counties had 1,987 active cases of covid-19 Friday, according to the state Department of Health. About 41% of people 12 and older are fully vaccinated in both counties, with those partially immunized at about 9%.

"My guess is nobody knew 16 months ago how this was going to snowball," said Board Chairman Hershey Garner with Highlands Oncology. "I thought we'd be done with business by the fall."

Jordan presented the board a draft of a scope of work for the position, which would be contracted between the officer and the city for one year. He said he supported making the position a paid one.

The scope of work includes developing a covid-19 recovery plan, developing a plan to deal with racism as a public health issue, regular communications with the public and media, attending meetings with various entities, coming up with a future pandemic response plan and reporting to city staff and administrators.

The board discussed provisions to add to the scope, such as communicating with state representatives and serving as a liaison to the School District and businesses. The board will discuss additions or changes to the scope at its next meeting at 4:30 p.m. Wednesday.

The proposal, including the pay, will go before the City Council. If the council approves, the position will be opened to qualified applicants and go through the city's purchasing department.

A contract would come back to the council for approval. It could go to Sharkey or another applicant.

Sharkey said in her letter she wants to continue her role as public health officer. She recommended using some of the $17.9 million coming to the city from the American Rescue Plan to address public health. Expenditures should include media campaigns, outreach and medical supplies in addition to compensation for the officer position, she said.

"Public health has been underfunded for decades, which is one of the many reasons that the response to the pandemic has struggled," Sharkey said. "We have the opportunity and the funding now available to remedy this." 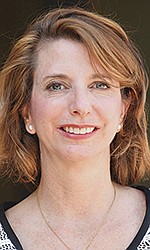 Dr. Marti Sharkey Friday, July 24, 2020, after receiving the oath of office as the city of Fayetteville's public health officer on the steps of City Hall in Fayetteville. Sharkey, a pediatrician with a background in infectious diseases, will serve at the behest of the city's newly re-established board of health, which is advising administrators during the pandemic. Check out nwaonline.com/200725Daily/ and nwadg.com/photos for a photo gallery. (NWA Democrat-Gazette/David Gottschalk)
ADVERTISEMENT