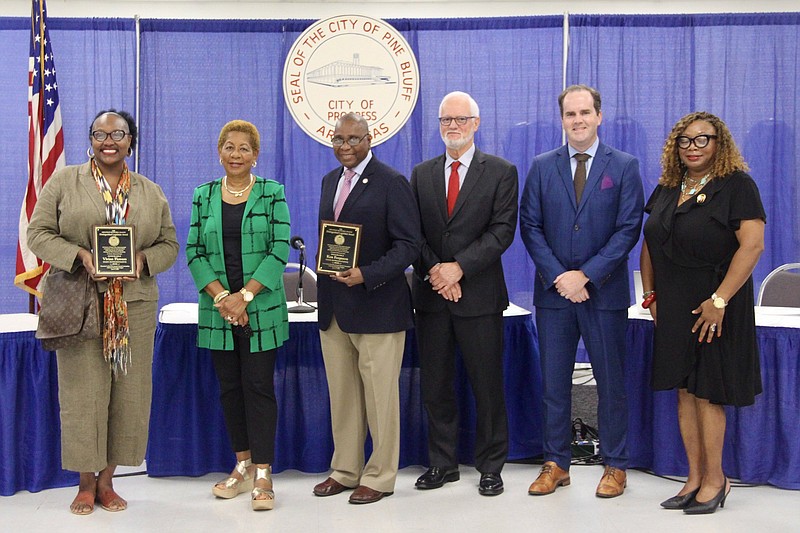 Reps. Kenneth Ferguson of District 16 and Vivian Flowers of District 17 were presented with the Distinguished Legislative Award by representatives of the Arkansas Municipal League at this week's City Council meeting.

The honor was for those who demonstrated exemplary service that benefited cities and towns of Arkansas during the 93rd General Assembly. Former state legislator Jack Critcher and John Wilkerson of the Arkansas Municipal League presented the representatives with plaques.

Wilkerson said Flowers was an avid supporter of local control, which was very important.

"We believe those closest to the people can best represent the people especially on a day-to-day basis and Rep. Flowers always listens to us, our concerns, and our focus on local control," said Wilkerson. "She is a thinker when it comes to legislation."

Wilkerson said that even after bills have passed, Flowers still contributes ideas on how that bill affects Arkansas.

"She represents the city of Pine Bluff incredibly well up in Little Rock," said Wilkerson, who added that the city should be proud. "She tries and does great work up there which is not always very easy for anybody."

"Anytime there is a bill that is going to impede local control or do any harm, whether it's to Pine Bluff or any city, he is always very aware and he does everything he can to stop it and is usually very successful," said Critcher, who added that Ferguson represents Pine Bluff well. "We are so proud and pleased that he is down there."

Ferguson is serving his fourth term in the Arkansas House. His District 16 includes portions of Jefferson and Lincoln counties.

He is the father of four and lives in Pine Bluff with his wife Cassandra.

Flowers also is serving her fourth term in the House. She represents Her District 17 encompasses a portion of Jefferson County.

Flowers serves on the Joint Committee for Advanced Communications and Information Technology, the Joint Budget Committee, House Insurance, and Commerce Committee, and the House Judiciary Committee.

Flowers earned a degree in political science and professional and technical writing from the University of Arkansas at Little Rock. She went on to earn a master's degree from the Clinton School of Public Service.

She lives in Pine Bluff.