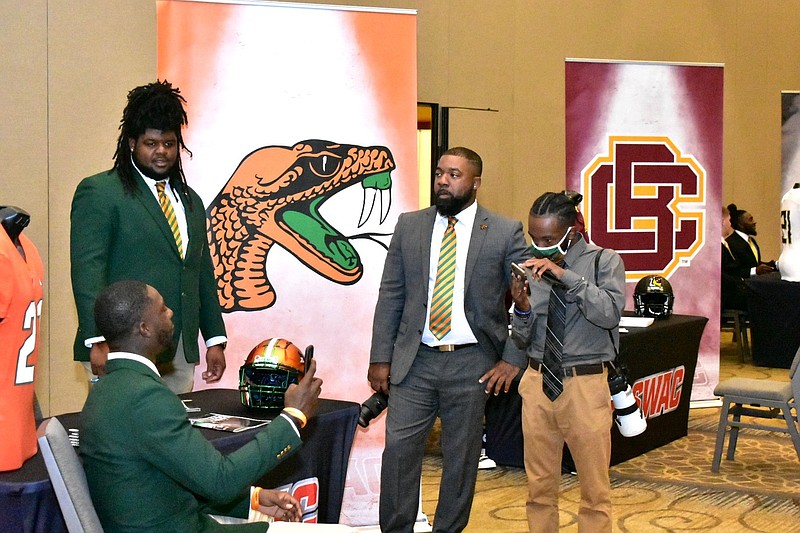 Florida A&M safety Markquese Bell (from left) and offensive lineman Keenan Forbes chat with two other individuals before the start of SWAC Media Day on Tuesday in Birmingham, Ala. Florida A&M’s and Bethune-Cookman’s logos are pictured in the background. (Pine Bluff Commercial/I.C. Murrell)

Editor’s note: This is the fourth of a five-part series previewing the football season for the University of Arkansas at Pine Bluff and the Southwestern Athletic Conference.

Florida became the sixth state of the conference July 1 when Tallahassee’s Florida A&M University and Daytona Beach’s Bethune-Cook-man University officially jumped from the Mid-Eastern Athletic Conference, where both had competed since 1980 (with the exception of the 1984-86 seasons for FAMU).

Bethune-Cookman’s Terry Sims, going into his seventh year as the Wildcats’ head coach, said he loves the change, although the Wildcats have yet to kick off their first game in two years.

“Change is good,” Sims said. “It’s, I think, something we’ve been looking forward to. It’s been a lot of talk about it probably for the last year actually happening, but now it’s real. It’s here. We’re excited about it.” B-CU and FAMU are the fifth and sixth teams since 2010 to leave the MEAC, whose members have faced financial challenges stemming from long road trips as the league extended from Delaware to Florida.

Last fall, both B-CU and FAMU elected to shut down their football seasons and not make them up in the spring due to heightened concerns over the coronavirus pandemic. The MEAC followed suit in February, shutting down league play after six of the nine teams elected to opt out of the season.

The SWAC and other Football Championship Subdivision conferences postponed their fall seasons to the spring. The University of Arkansas at Pine Bluff reached the SWAC championship game but lost to Alabama A&M University.

Neither SWAC Media Day attendee from B-CU or FAMU elaborated on the reasons for the switch to the league down south, but they discussed their anticipation toward playing again.

“We’re looking forward to getting back to the football field,” said fourth-year FAMU Coach Willie Simmons, making his return to the SWAC after leading Prairie View from 2014-17.

“Covid took a full year away from us, and we’re excited to get back to the football field, whether as members of the MEAC or the SWAC. We’re excited to play ball, but we’re excited about this new move. It’ll definitely help our football program and it will help our athletic program as a whole.” Simmons’ Rattlers finished 9-2 and 7-1 in the MEAC to top league standings in 2019, but they were ineligible for the championship, reportedly due to improper student-athlete certification. The Wildcats were 7-4 and 5-3, finishing behind North Carolina A&T and South Carolina State universities.

Whether missing a full season of football was a detriment or benefit depends on how one looks at the situation, B-CU’s Sims said.

“We don’t look at it as being a detriment,” he said. “We look at it as having time for our guys to heal, having an opportunity to have a spring practice and clean up some things and teach the new guys the system and allow the older guys who have been in the system a chance to get on the field and shake the rust off.” The missed 2020 season tested the Wildcats’ discipline with a steady diet of offseason preparation while staying healthy against covid-19.

“What I learned here recently is being great is boring,” Wildcats tight end Taron Mallard said. “It’s a lot of the same thing every day. It’s like you’re a robot, but just being able to have that discipline and seeing the results and knowing that I’m getting better, that’s being a part of it.” Aside from a break in May, FAMU offensive lineman Keenan Forbes said, the Rattlers took no days off during their extended offseason.

“We’re working out every day, night and day, watching film, in the playbooks,” Forbes said. “To us, it’s a blessing in disguise, to be real.” The Rattlers will try to reap the rewards of extra preparation starting with the ESPN2-televised Orange Blossom Classic against Jackson State University on Sept. 5 in Miami Gardens, Fla. FAMU will visit UAPB on Nov. 13.

Bethune-Cookman’s season kicks off Sept. 4 at the University of Texas at El Paso. The Wildcats do not play UAPB this year. The Rattlers and Panthers will square off Nov. 20 in Orlando.