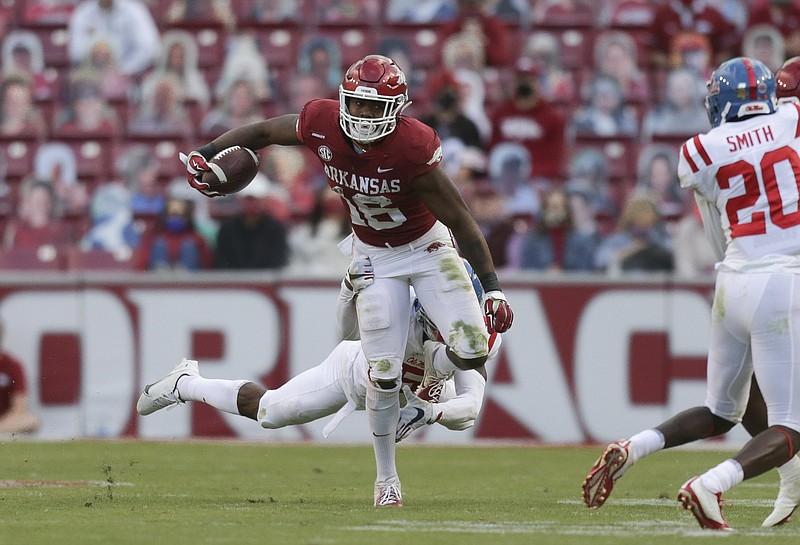 FAYETTEVILLE — Another year, another set of low expectations for the Arkansas Razorbacks.

Media attending Southeastern Conference Media Days this week picked the University of Arkansas to finish sixth in the SEC West while selecting one Razorback, wideout Treylon Burks, to the preseason All-SEC first team.

Alabama was the overwhelming choice to repeat as SEC champion by the 134 members who voted on the predicted order of finish and the preseason All-SEC teams.

The Crimson Tide, who went 13-0 and captured their sixth national championship under coach Nick Saban last year, picked up 84 votes to win the league title, followed by Georgia with 45. Florida, Kentucky, Ole Miss, South Carolina and Texas A&M received one vote each to win the SEC championship.

In divisional voting, Alabama got 130 first-place votes to win the West and accrued 932 points to easily outpace Texas A&M (760) and LSU (633). Ole Miss was projected to finish fourth, followed by Auburn, Arkansas and Mississippi State. Arkansas, LSU, Ole Miss and Texas A&M each received one vote to capture the Western Division.

Georgia got 124 first-place votes to win the SEC East and earned 923 total points, well ahead of Florida (784) and Kentucky (624). Missouri was the choice to finish fourth, followed by Tennessee, South Carolina and Vanderbilt.

The Gators received seven first-place votes, while Kentucky got two and South Carolina one.

Burks, a junior from Warren who led the Razorbacks with 51 catches for 820 yards and 7 touchdowns, joined Alabama’s John Metchie III as the first-team receivers along with Texas A&M tight end Jalen Wydermyer, Ole Miss quarterback Matt Corral, and running backs Tank Bigsby of Auburn and Isaiah Spiller of Texas A&M.

The Razorbacks, coming off a 3-7 season against an All-SEC schedule, have a scheduled rated by many as the toughest in the country. Arkansas opens the season on Sept. 4 at Reynolds Razorback Stadium against former Southwest Conference rival Rice, then hosts Texas the following Saturday.