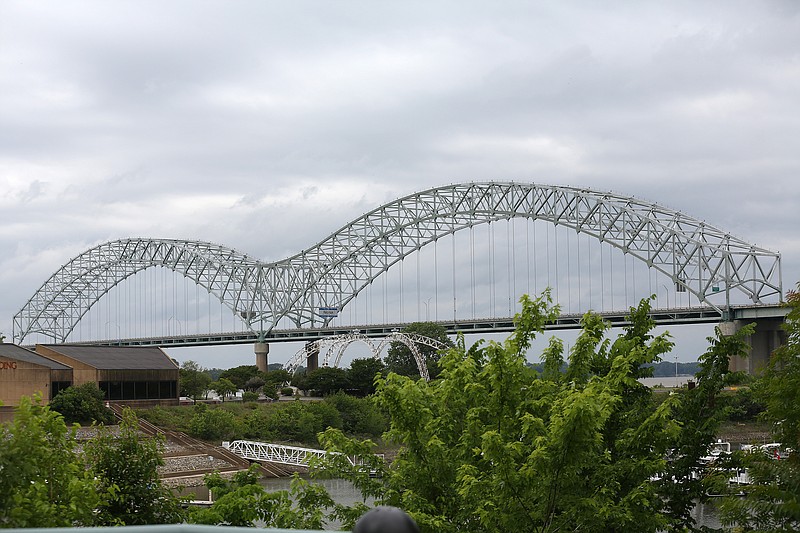 The I-40 Hernando de Soto Bridge crossing the Mississippi River connecting Arkansas and Tennessee on Tuesday, May 18, 2021. (Arkansas Democrat-Gazette/Thomas Metthe)

Additional repairs to the Interstate 40 bridge over the Mississippi River at Memphis probably means the bridge won't open until early August, the Tennessee Department of Transportation said Friday.

The work in the third and final phase of the project to reopen the Hernando de Soto Bridge involves the installation of what is now a total of 17 steel plates, which requires drilling, bolting and torquing. Each plate requires up to 200 or more bolts in order to attach it to the bridge.

"Once the last bolt is torqued on the plate, these items can be completed," the department said in its Friday update posted on the agency website.

The third phase involves repairing weaknesses found after an in-depth inspection of the entire bridge involving about 500 welds after a crack in a bridge feature critical to its integrity was discovered May 11, forcing transportation officials to abruptly close the crossing that is part of a major freight corridor through the central United States.

The inspection turned up no cracks.

Thirteen of the 17 plates have been "at least 'rough-set,'" which means they require additional work before they are fully set, according to the update. "The last four plates are arriving today and will be set over the next few days."

All the plates were fabricated by W&W/AFCO Steel at its fabrication facilities in Little Rock and Van Buren. Plates delivered this week each weigh up to 5,000 pounds.

That laborious work will "likely push us into the first part of August in opening the bridge to traffic," the update said.

A more specific schedule to reopen the bridge will be available next week.

The bridge will be closed three full months on Aug. 11.

Friday's statement was the first new estimate of the bridge reopening since June when transportation officials said the bridge repairs could take until the end of July or early August.

The crack on the Hernando de Soto Bridge, a tied-arch span, was found on a steel beam connecting cords to the arch. When the beam cracked, the load that was once carried by the beam shifted to other parts of the bridge.

The way the bridge is designed means the Arkansas Department of Transportation classifies it as "fracture critical," meaning parts of the bridge are "subject to tension whose failure would probably cause a portion of or the entire bridge to collapse." Fracture critical bridges require frequent inspections but aren't inherently unsafe.

The Tennessee Transportation Department oversees repairs of the shared bridge, while the Arkansas department is responsible for bridge inspections. Kiewit Infrastructure Group was contracted for the repairs.

The crack was discovered May 11, but a photo from 2019, confirmed by transportation officials to be authentic, shows the crack has potentially been there for years. Another photo appears to show a crack as far back as 2016, but the authenticity of that image remains under investigation.