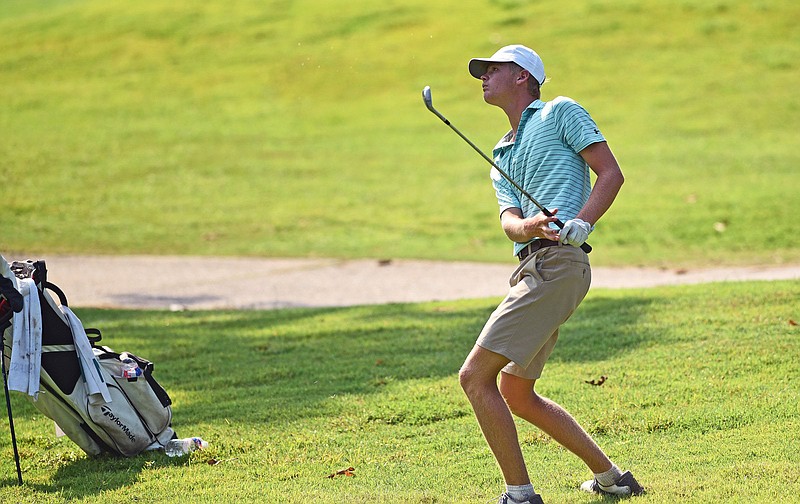 Carson Stephens walked most of the front nine Friday afternoon with a swagger.

Eagle chip to a foot? No problem.

Punch a runner through a 3-yard window of trees? Make it look easy.

Hole a birdie from just off the green? Why not?

As Stephens made the walk from the ninth green to the 10th tee, it was hard to argue the assurance in his step was unwarranted. Stephens was without a bogey to that point and held a 4-up lead with a title in his sights.

"You always have to have confidence on the golf course," Stephens said. "If you don't believe in yourself, then it's just not going to end well."

So it was only fitting things turned out quite well for the Cabot native as Stephens turned away Hot Springs' Wil Griffin for a 4-and-3 victory in the boys final of the Arkansas State Golf Association Junior Match Play Championship. Stephens' win capped four days of play at Eagle Hill Golf & Athletic Club that also saw North Little Rock's Mackenzie Lee capture a fourth consecutive girls match play crown, running away from Little Rock's Anna Kate Nichols to win 6 and 4.

But what looked like it had the potential to turn into a rout for Stephens flipped in a matter of minutes on the back nine.

With both players in position to reach the par-5 10th in three shots, Stephens wound up with a bogey after putting his approach into the greenside bunker. Griffin two-putted for par to pull back within three, then hit the shot of the day on the 11th, dropping his third 10 feet from the hole -- despite an awkward lie -- before rolling home a birdie to trail by just two holes.

But Stephens, who had the experience of his older brother, Logan, on his bag, was able to reset mentally.

The pair both knocked home pars on the par-3 12th before a series of errors by Griffin wiped away any chance he had of making a comeback.

Griffin flew his second shot over the green and into the water on the 13th, setting up Stephens for an easy win with a par. On the 14th, Griffin appeared as if he was going to get up and down for a half but lipped out his par as Stephens went 4-up with four holes remaining.

When Griffin's second shot from the trees bounded into the water behind the 15th, it didn't even matter that Stephens did the same. Stephens gathered himself, chipped from the fringe to less than a foot and that was all he needed for the first match-play title of his career.

"This one's at the top of the list," Stephens said when asked where he ranked the victory. "Thirty-six holes a day, a qualifier -- anybody can beat anybody in match play. Every shot counts. It's just an awesome feeling."

While match play can be unpredictable at times, it was exactly the opposite of that on the girls side of things. Although Nichols held strong through the opening nine holes in a rematch of last year's girls final -- she parred every hole and Lee made just two birdies to hold a 2-up lead at the turn -- the Pulaski Academy sophomore couldn't keep Lee down on the back half.

Lee fired lasers into the 10th, 11th and 12th greens, picking up three birdies with relative ease to go 5-up. After halving the 13th, the No. 22 ranked junior girls player in the nation rolled home a downhill 15-footer for birdie on the par-3 14th to punctuate a dominant week.

Lee, who didn't have to qualify and was automatically the No. 1 seed with a bye by virtue of entering as the three-time reigning champion, never played a shot on any of holes 15-18 the entire week.

Although the North Little Rock senior will be headed to SMU in 2022, she'll get one more shot to defend her title next summer.

"My goal was to win five [times]," Lee said. "I thought I was going to be able to win when I was 13, but I was a little short of it. It's just the one tournament that we have a different format for in Arkansas, so I just think that makes it really special." 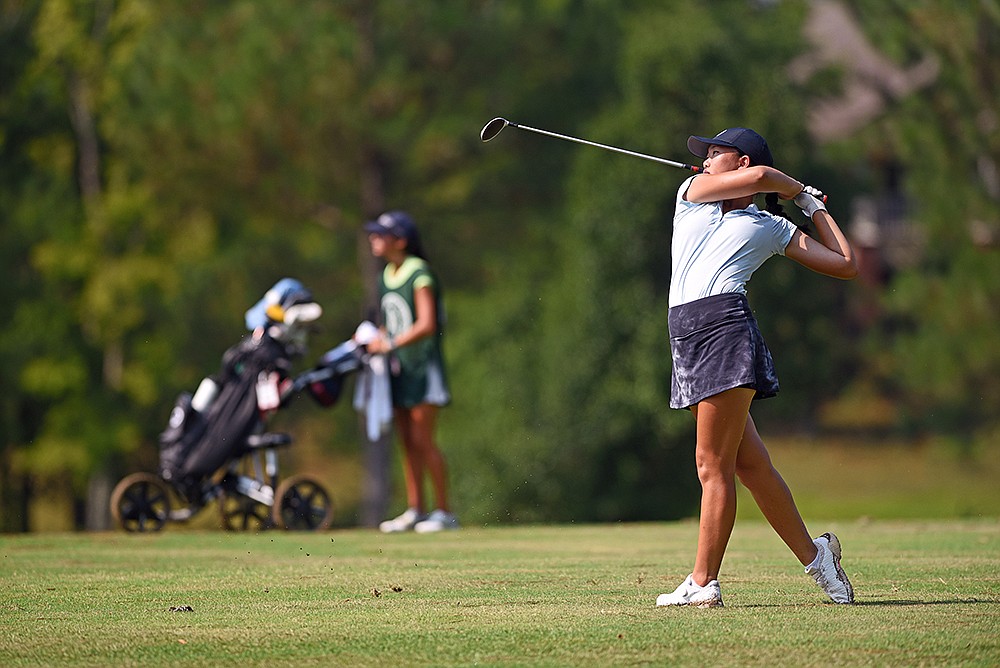 Mackenzie Lee tees off on the 10th hole Friday during her 6-and-4 victory over Anna Kate Nichols in the girls final of the ASGA Junior Match Play Championship at Eagle Hill Golf Course in Little Rock. More photos at arkansasonline.com/724golf/. (Arkansas Democrat-Gazette/Staci Vandagriff)