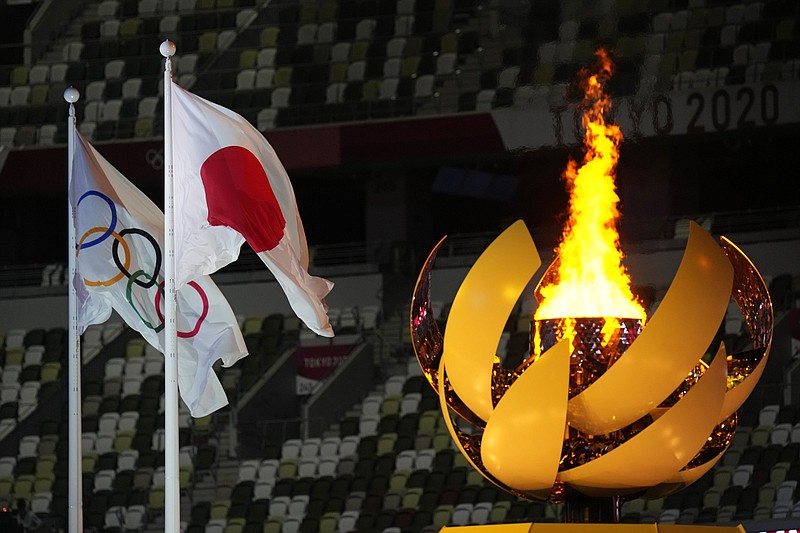 The Olympic flame burns at the end of Friday’s opening ceremony of the summer Olympic Games in Tokyo. Japanese tennis star Naomi Osaka lit the cauldron. Athletes from 209 nations are slated to compete in the Games. More photos available at arkansasonline.com/724tokyo21. (AP/Petr David Josek)

TOKYO -- Belated and beleaguered, the virus-delayed Tokyo Summer Olympics finally opened Friday night with cascading fireworks and made-for-TV choreography that unfolded in a near-empty stadium, a colorful but strangely restrained ritual that set a striking tone to match a pandemic Games.

As their opening played out, devoid of the usual crowd energy, the Olympics convened amid simmering anger and disbelief in much of the host country, but with hopes from organizers that the excitement of the sports to follow would offset the widespread opposition.

"Today is a moment of hope. Yes, it is very different from what all of us had imagined," IOC President Thomas Bach said. "But let us cherish this moment because finally we are all here together.

"This feeling of togetherness -- this is the light at the end of the dark tunnel of the pandemic."

Some apprehension throughout Japan threatened for months to drown out the usual packaged glitz of the opening. Inside the stadium after dusk Friday, however, a precisely calibrated ceremony sought to portray that the Games are going on.

Early in the ceremony, an ethereal blue light bathed the empty seats as loud music muted the shouts of scattered protesters outside calling for the Games to be canceled. A single stage held an octagon shape meant to resemble the country's fabled Mount Fuji. Later, an orchestral medley of songs from iconic Japanese video games served as the soundtrack for athletes' entrances.

Mostly masked athletes waved enthusiastically to thousands of empty seats. Some athletes marched socially distanced, while others clustered in ways utterly contrary to organizers' hopes. The Czech Republic entered with other countries even though its delegation has had several positive covid tests since arriving.

"You had to face great challenges on your Olympic journey," Bach told the athletes. "Today you are making your Olympic dream come true."

Tennis superstar Naomi Osaka lit the cauldron at the opening ceremony. The four-time Grand Slam champion was at the center of the stage when a staircase emerged, the cauldron opened atop a peak inspired by Mount Fuji, and Osaka ascended with the Olympic and Japanese flags blowing in the breeze off to her left. She dipped the flame in, the cauldron ignited and fireworks filled the sky.

"Undoubtedly the greatest athletic achievement and honor I will ever have in my life," Osaka wrote on Instagram next to a picture of her smiling while holding the flame. "I have no words to describe the feelings I have right now, but I do know I am currently filled with gratefulness and thankfulness."

Organizers held a moment of silence for those who had died in the pandemic; as it ticked off and the music paused, the sounds of the protests echoed in the distance.

[OLYMPICS: Keep up with the latest schedules, results + medals » arkansasonline.com/21olympics/]

Previous opening ceremonies have pulled off something that approaches magic. Scandals -- bribery in Salt Lake City, censorship and pollution in Beijing, doping in Sochi -- fade into the background when the sports begin.

But with people still falling ill and dying each day from the coronavirus, there's a particular urgency to the questions about whether the Olympic flame can burn away the fear or provide a measure of catharsis -- and even awe -- after a year of suffering and uncertainty in Japan and around the world.

"Today, with the world facing great challenges, some are again questioning the power of sport and the value of the Olympic Games," Seiko Hashimoto, president of the Tokyo 2020 organizing committee, said in a speech. But, she said of the Games' possibilities, "This is the power of sport. ... This is its essence."

Japanese Emperor Naruhito declared the Games open, with fireworks bursting over the stadium after he spoke.

Outside, hundreds of curious Tokyo residents lined a barricade that separated them from those entering -- but just barely: Some of those going in took selfies with the onlookers across the barricades, and there was an excited carnival feeling. Some pedestrians waved enthusiastically to approaching Olympic buses.

The sports have already begun, and some of the focus is turning toward the competition to come.

Can the U.S. women's soccer team, for instance, even after a shocking loss to Sweden, become the first to win an Olympics after a World Cup victory? Can Japan's Hideki Matsuyama win gold in golf after becoming the first Japanese player to win the Masters? Will Italy's Simona Quadarella challenge American standout Katie Ledecky in the 800- and 1,500-meter freestyle swimming races?

For now, it's hard to miss how unusual these Games promise to be.

Japanese athletes, freed from onerous travel rules, may enjoy a nice boost over their rivals in some cases, even without fans. Judo, a sport that Japan is traditionally a powerhouse in, will begin today, giving the host nation a chance for early gold.

The reality, for now, is that the delta variant of the virus is still rising, straining the Japanese medical system in places, and raising fears of an avalanche of cases. Only a little over 20% of the population is fully vaccinated. And there have been near daily reports of positive virus cases within the so-called Olympic bubble that's meant to separate the Olympic participants from the worried, skeptical Japanese population.

For a night, at least, the glamour and message of hope of the opening ceremonies may distract many global viewers from the surrounding anguish and anger.

"After more than half a century, the Olympic Games have returned to Tokyo," Hashimoto said. "Now we will do everything in our power to make this games a source of pride for generations to come." 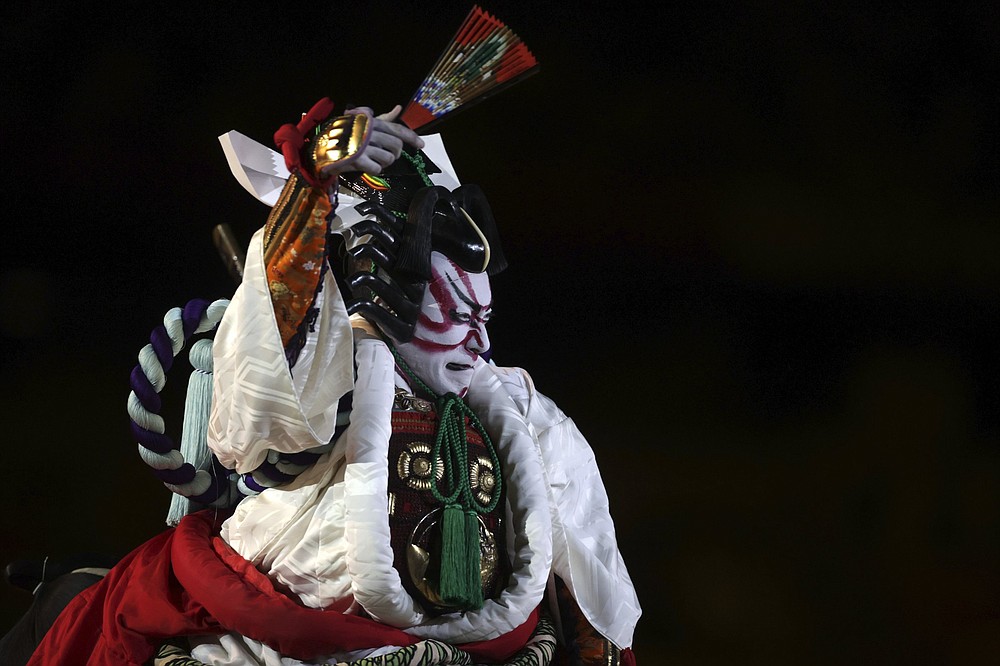 A performer participates in a traditional Japanese kabuki costume during the Olympic opening ceremony Friday in Tokyo. (AP/Hannah McKay) 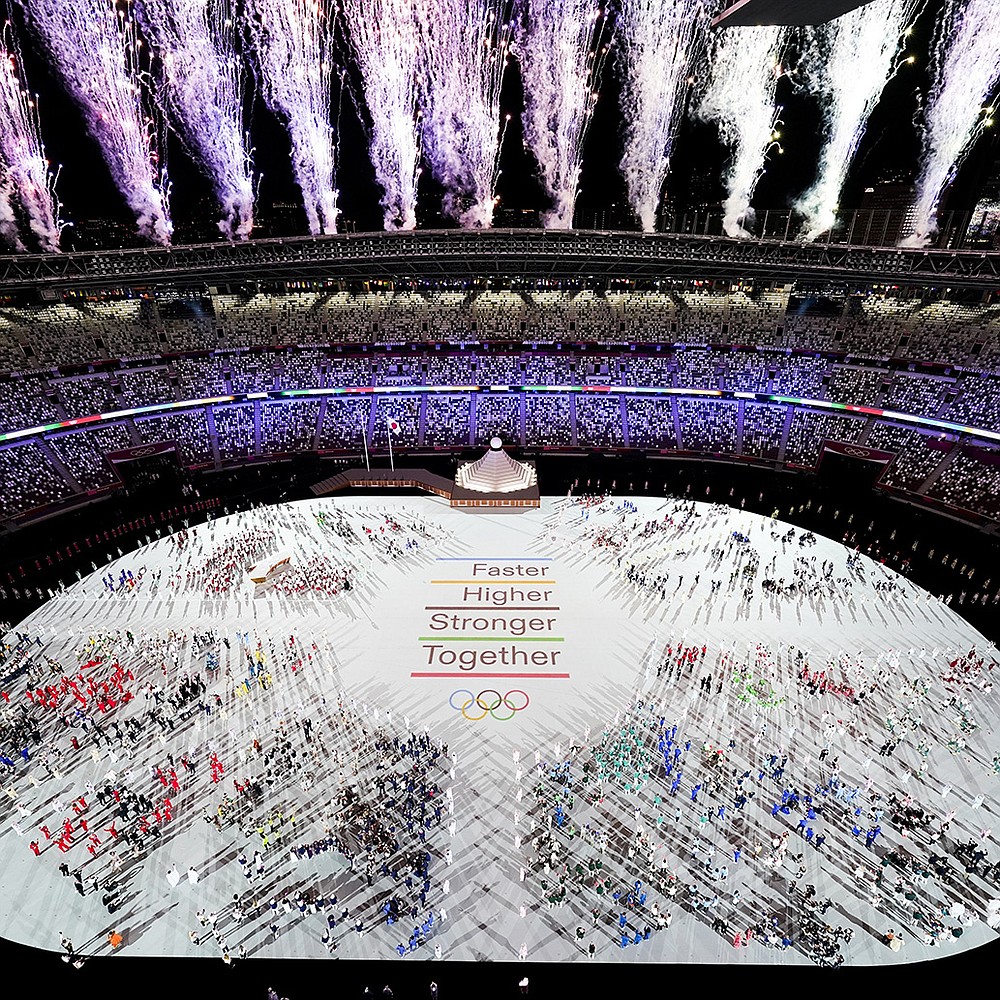 Fireworks herald the start of the Tokyo Olympics on Friday in an occasionally somber and sparsely attended opening ceremony for the games that were postponed for a year and begin under the threat of a covid-19 outbreak. For the next 16 days, with fans barred from attendance, Japanese officials and the International Olympic Committee will conduct what amounts to a carefully monitored, made-for-television event. (AP/Morry Gash) 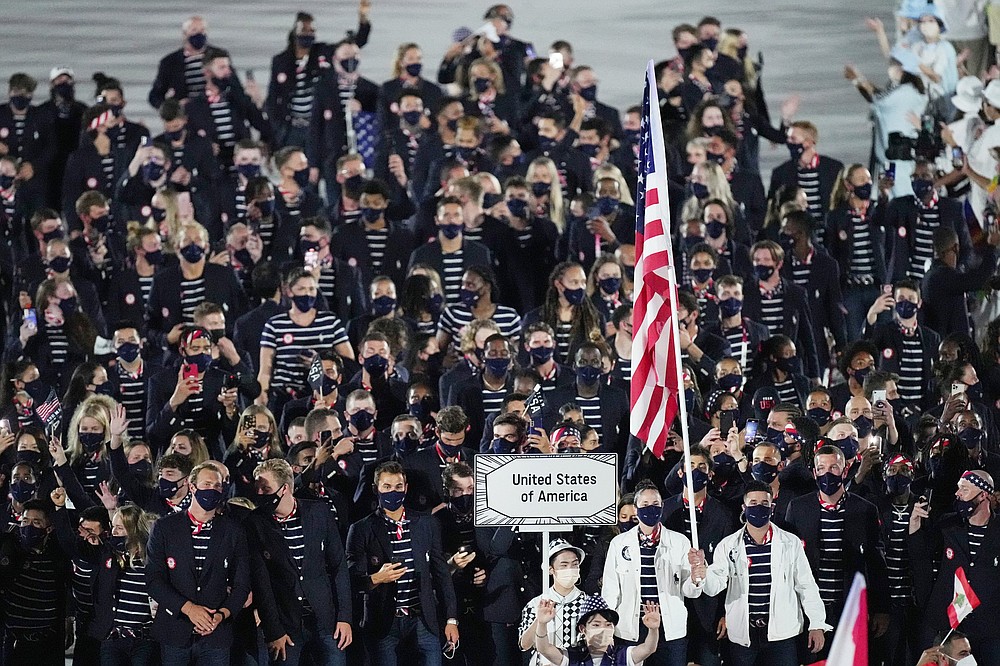 The United States flag-bearers, basketball player Sue Bird (left) and baseball player Eddy Alvarez, lead the American Olympic team during the parade of nations at the opening ceremony of the Tokyo Olympics on Friday. (AP/Natacha Pisarenko) 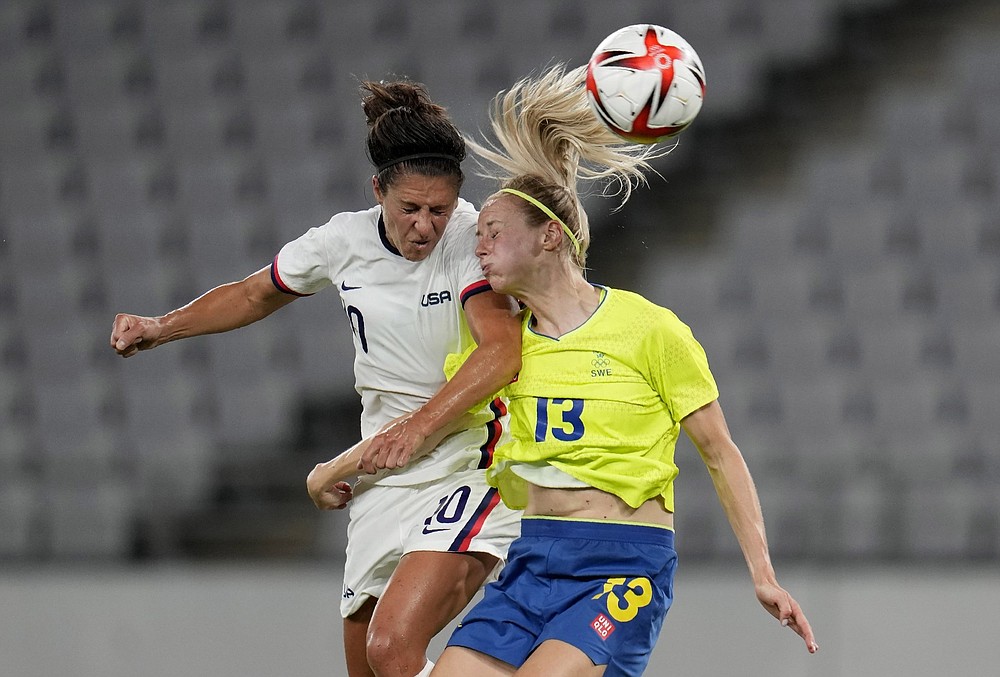 Carli Lloyd (left) and the United States women’s soccer team try to even their record in Olympic play today when they take on New Zealand. Coverage begins at 6:30 a.m. Central on NBCSN. (AP/Ricardo Mazalan) 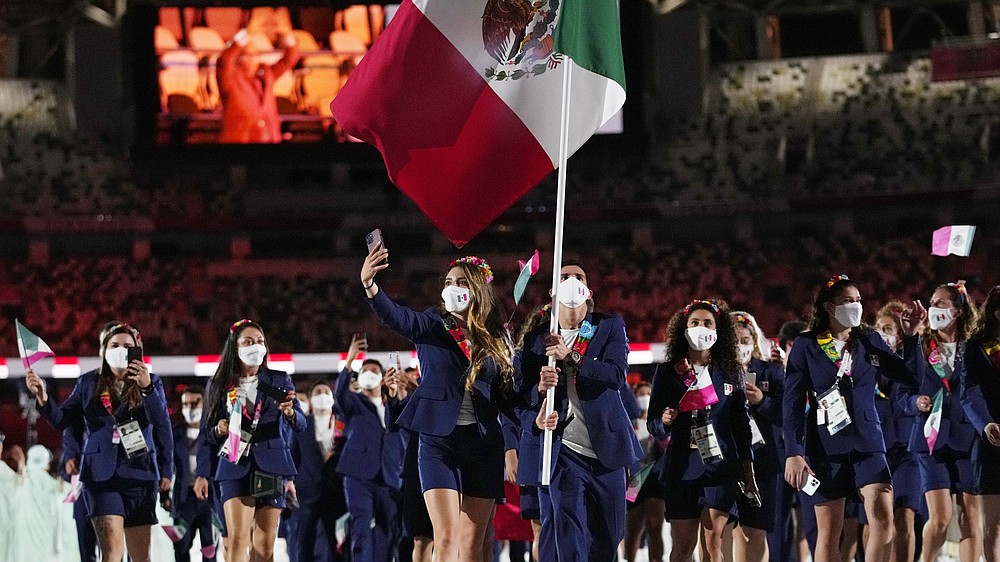 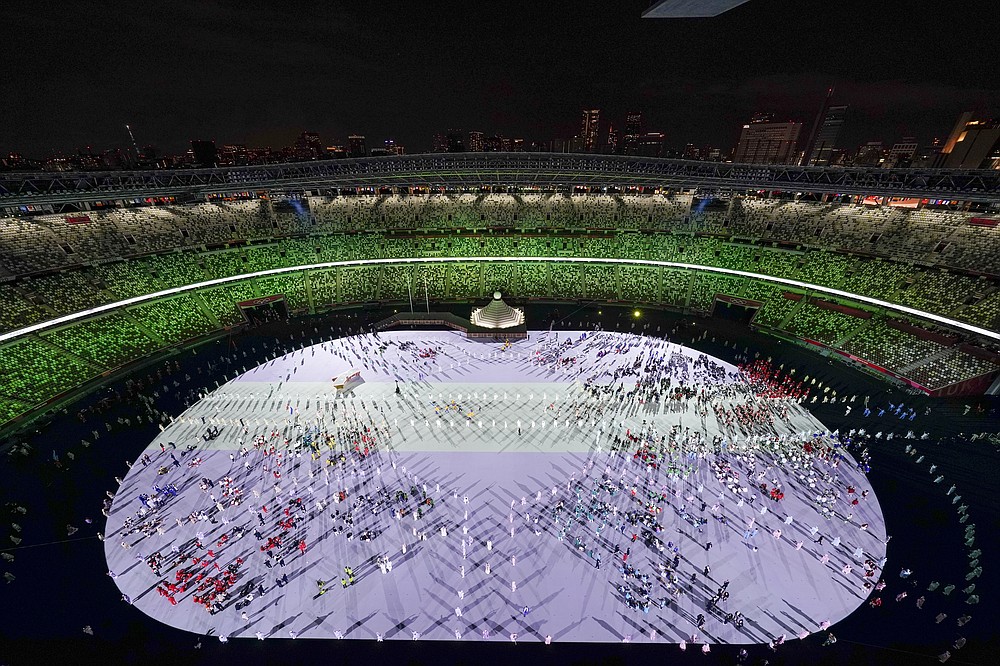 Athletes are introduced during the opening ceremony at the Olympic Stadium at the 2020 Summer Olympics, Friday, July 23, 2021, in Tokyo. (AP Photo/Morry Gash) 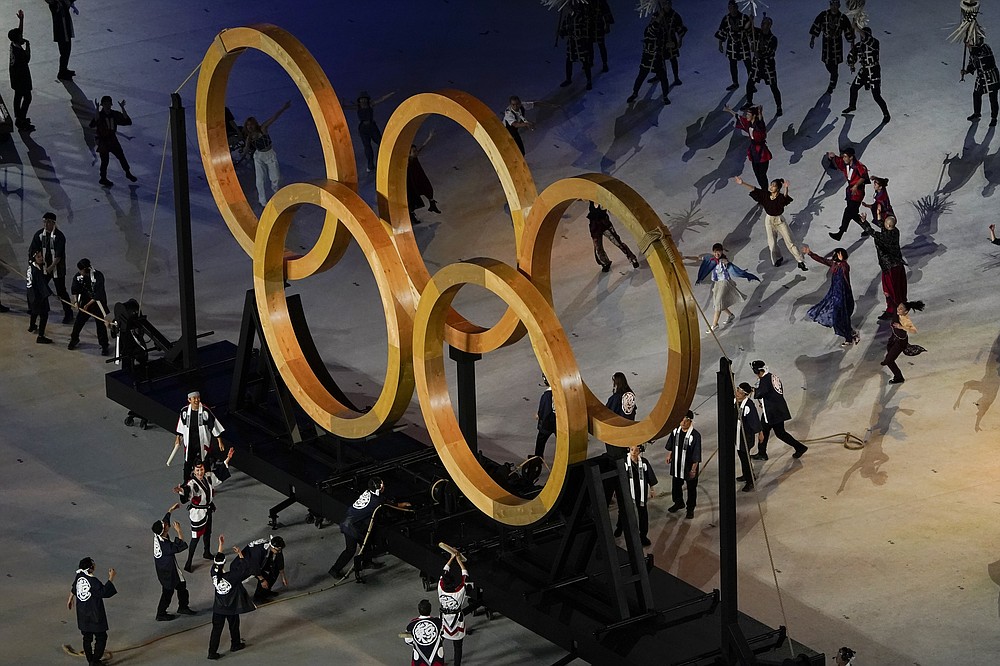 Actors perform during the opening ceremony at the Olympic Stadium at the 2020 Summer Olympics, Friday, July 23, 2021, in Tokyo. (AP Photo/Morry Gash) 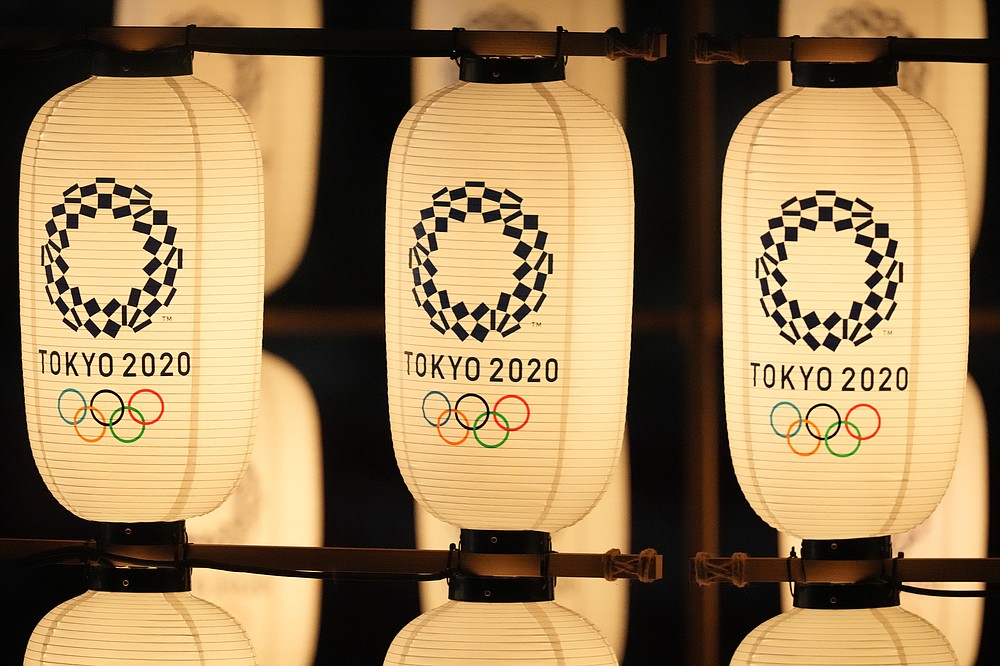 Lanterns illuminated during the opening ceremony in the Olympic Stadium at the 2020 Summer Olympics, Friday, July 23, 2021, in Tokyo, Japan. (AP Photo/Ashley Landis) 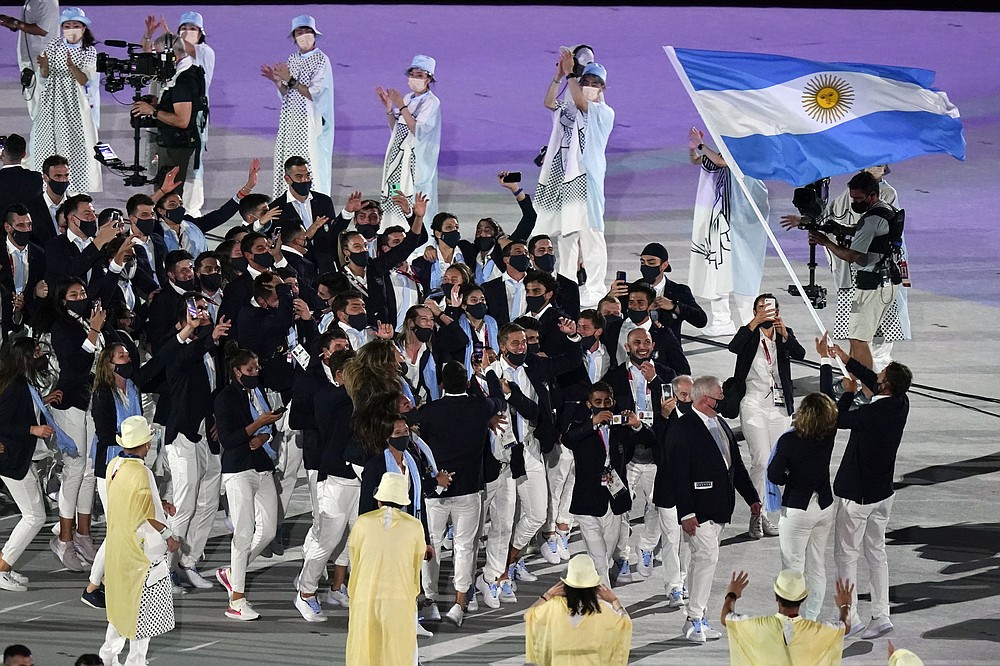 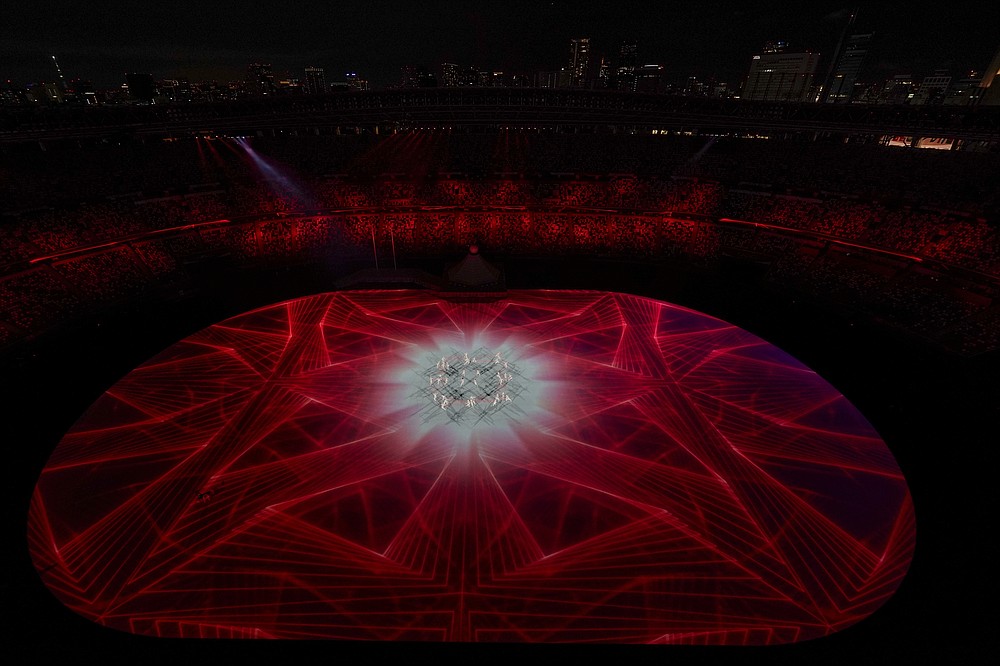 Dancers are seen during the opening ceremony at the Olympic Stadium at the 2020 Summer Olympics, Friday, July 23, 2021, in Tokyo. (AP Photo/David J. Phillip) 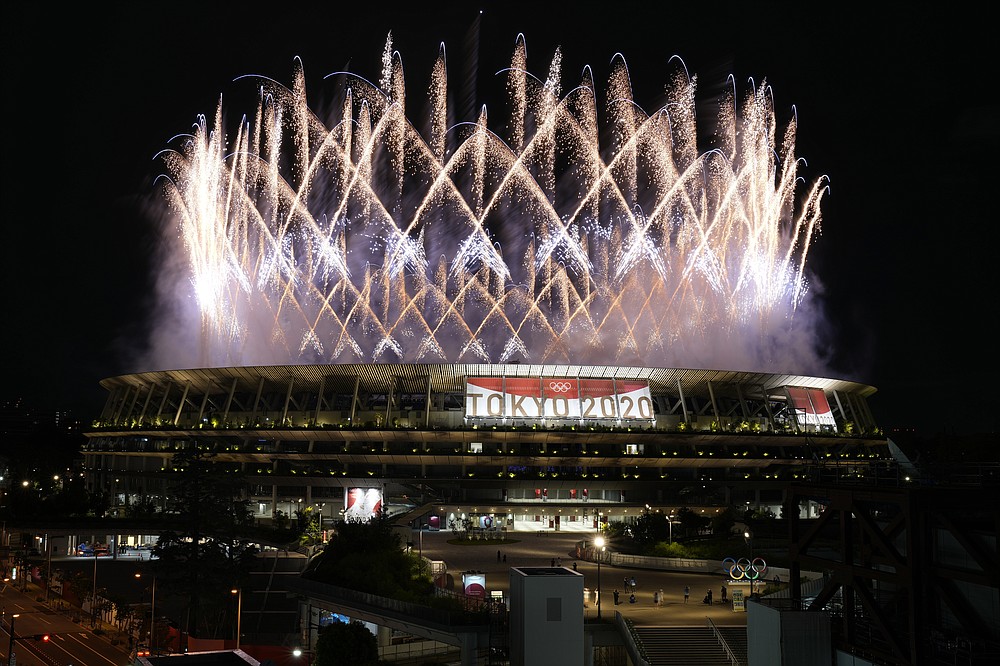 Fireworks illuminate over the National Stadium during the opening ceremony of the 2020 Summer Olympics, Friday, July 23, 2021, in Tokyo. (AP Photo/Shuji Kajiyama) 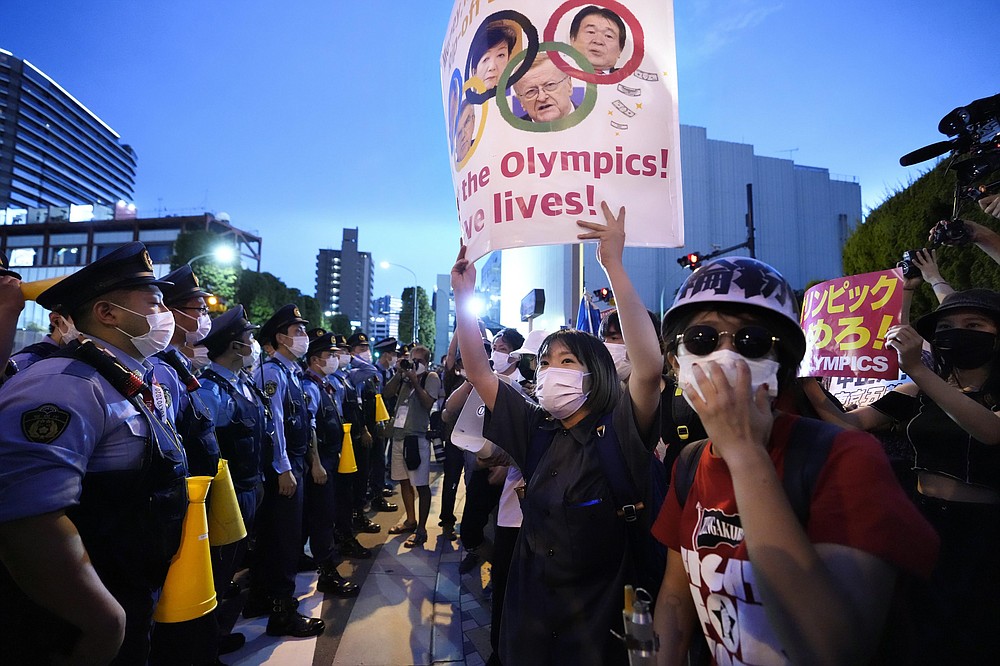