'Til faith do us part

Indian Sikh said she married a Muslim for love; her parents call it coercion by SAMEER YASIR, EMILY SCHMALL AND IQBAL KIRMANI THE NEW YORK TIMES | July 24, 2021 at 3:05 a.m. 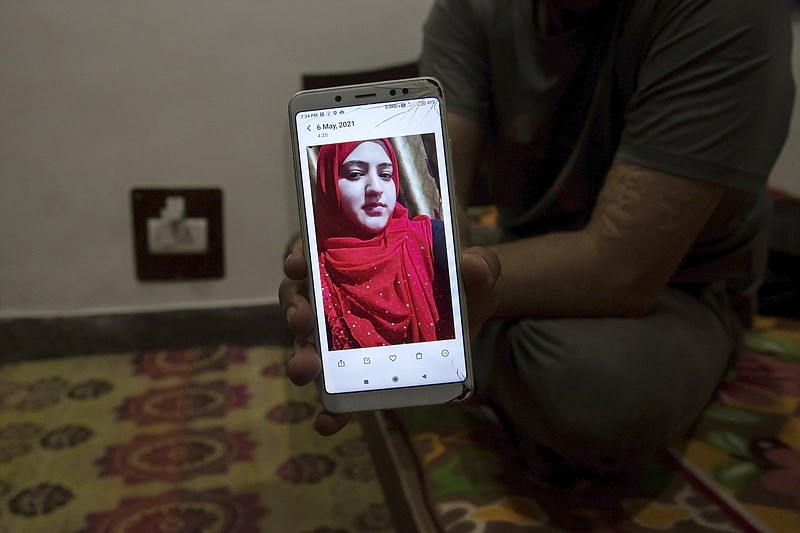 Shahid Nazir Bhat, a Muslim, displays a photograph of Manmeet Kour Bali, a Sikh by birth who converted to Islam to marry him, in Srinagar, India. New laws across India, in states ruled by Prime Minister Narendra Modi’s Bharatiya Janata Party, are seeking to ban all interfaith marriages. (The New York Times/Showkat Nanda)

SRINAGAR, Kashmir -- Manmeet Kour Bali had to defend her marriage in court.

A Sikh by birth, Bali converted to Islam to marry a Muslim man, Shahid Nazir Bhat. Her parents objected to a marriage outside their community and filed a police complaint against her new husband.

In court last month, she testified that she had married for love, not because she was coerced, according to a copy of her statement reviewed by The New York Times. Days later, she ended up in India's capital of New Delhi, married to a Sikh man.

Religious diversity has defined India for centuries, recognized and protected in the country's Constitution. But interfaith unions remain rare, taboo and increasingly illegal.

A spate of new laws across India, in states ruled by Prime Minister Narendra Modi's Bharatiya Janata Party are seeking to banish such unions altogether.

While the rules apply broadly, right-wing supporters in the party portray such laws as necessary to curb "love jihad," the idea that Muslim men marry women of other faiths to spread Islam. Critics contend that such laws fan anti-Muslim sentiment under a government promoting a Hindu nationalist agenda.

Last year, lawmakers in the northern Indian state of Uttar Pradesh passed legislation that makes religious conversion by marriage an offense punishable by up to 10 years in prison. So far, 162 people there have been arrested under the new law, although few have been convicted.

"The government is taking a decision that we will take tough measures to curb love jihad," Yogi Adityanath, a Hindu monk and the top elected official of Uttar Pradesh, said shortly before that state's Unlawful Religious Conversion Ordinance was passed.

Four other states ruled by the political party have passed or introduced similar legislation.

In Kashmir, where Bali and Bhat lived, members of the Sikh community have disputed the legitimacy of the marriage, calling it "love jihad." They are pushing for similar anti-conversion rules.

While proponents of such laws say they are meant to protect vulnerable women from predatory men, experts say they strip women of their agency.

Across the country, vigilante groups have created a vast network of local informants, who tip off the police to planned interfaith marriages.

One of the largest is Bajrang Dal, or the Brigade of Hanuman, the Hindu monkey god. The group has filed dozens of police complaints against Muslim suitors or grooms, according to Rakesh Verma, a member in Lucknow.

A Pew Research Center study found that most Indians are opposed to anyone, but particularly women, marrying outside their religion. The majority of Indian marriages -- 4 out of 5 -- are still arranged.

The backlash against interfaith marriages is so widespread that in 2018, India's Supreme Court ordered state authorities to provide security and safe houses to those who wed against the will of their communities.

In its ruling, the court said outsiders "cannot create a situation whereby such couples are placed in a hostile environment."

The country's constitutional right to privacy has also been interpreted to protect couples from pressure, harassment and violence from families and religious communities.

In Bhopal, the capital of Madhya Pradesh state, the party-led government passed a bill in March modeled after the Uttar Pradesh law, stiffening penalties for religious conversion through marriage and making annulments easier to obtain.

The government is not "averse to love," said the state's home minister, Narottam Mishra, "but is against jihad."

Members of Kashmir's Sikh community are using Bali and Bhat's case to press for a similar law in Jammu and Kashmir.

"We immediately need a law banning interfaith marriage here," said Jagmohan Singh Raina, a Sikh activist based in Srinagar. "It will help save our daughters, both Muslims and Sikhs."

At a mosque in northern Kashmir in early June, Bali, 19, and Bhat, 29, performed Nikah, a commitment to follow Islamic law during their marriage, according to their notarized marriage agreement.

Afterward, Bali returned to her parents' home, where she said she was repeatedly beaten over the relationship.

"Now my family is torturing me. If anything happens to me or to my husband, I will kill myself," she said in a video posted to social media.

The day after she recorded the video, Bali left home and reunited with Bhat.

Even though a religious ceremony between people of the same faith -- as Bhat and Bali were after her conversion -- are recognized as legally valid, the couple had a civil ceremony and got a marriage license to bolster their legal protections. The marriage agreement noted that the union "has been contracted by the parties against the wish, will and consent of their respective parents.

"Like thousands of other couples who don't share the same religious belief but respect each other's faith, we thought we will create a small world of our own where love will triumph over everything else," Bhat said. "But that very religion became the reason of our separation."

Bali's father filed a police complaint against Bhat, accusing him of kidnapping his daughter and forcing her to convert.

On June 24, the couple turned themselves into the police in Srinagar, where both were detained.

IT WAS HER WILL

At the court, Bali recorded her testimony before a judicial magistrate, attesting that it was her will to convert to Islam and marry Bhat, according to her statement. Outside, her parents and dozens of Sikh demonstrators protested, demanding that she be returned to them.

It is unclear how the court ruled. The judicial magistrate declined requests for a transcript or an interview. Her parents declined an interview request.

The day after the hearing, Manjinder Singh Sirsa, the head of the largest Sikh gurdwara in New Delhi, flew to Srinagar. He picked up Bali, with her parents, and helped organize her marriage to another man, a Sikh. Following the ceremony, Sirsa flew with the couple to Delhi.

"It would be wrong to say that I convinced her," Sirsa said. "If anything adverse was happening, she should have said."

A written request for an interview with Bali was sent via Sirsa. He said she did not want to talk.

"She had a real breakdown," he said, repeating Bali's parents' claims that their daughter was kidnapped and forced to marry Bhat.

Bhat was released from police custody four days after Bali left for Delhi.

At his home in Srinagar, he is fighting the kidnapping charges. He said he was preparing a legal battle to win her back, but he feared the Sikh community's disapproval would make their separation permanent.

"If she comes back and tells a judge she is happy with that man, I will accept my fate," he said. 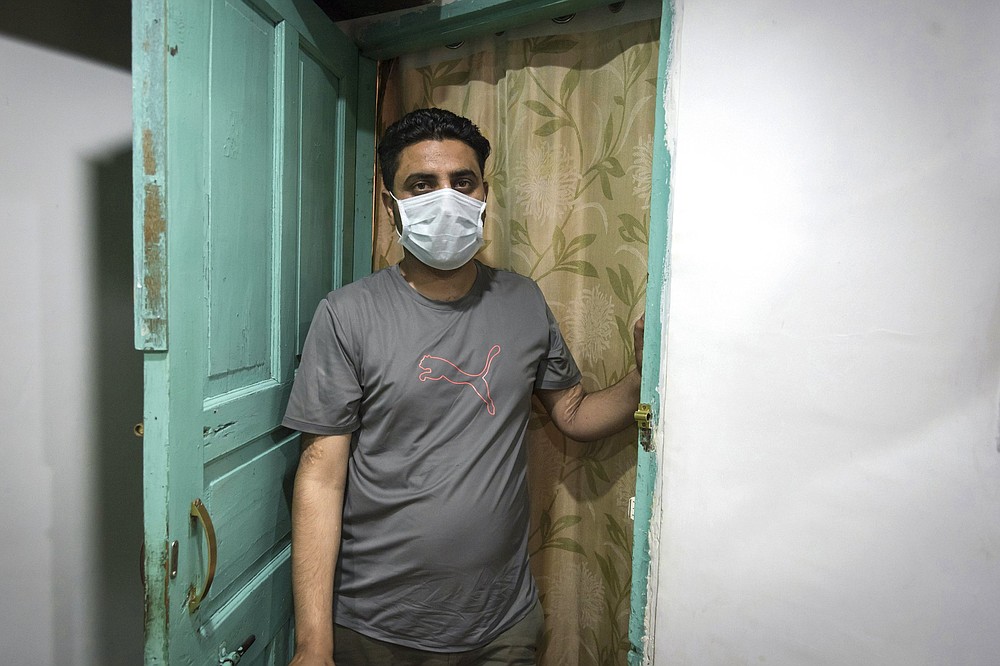 Shahid Nazir Bhat is a Muslim who married Manmeet Kour Bali and was accused by her Sikh parents of kidnapping her. (The New York Times/Showkat Nanda) 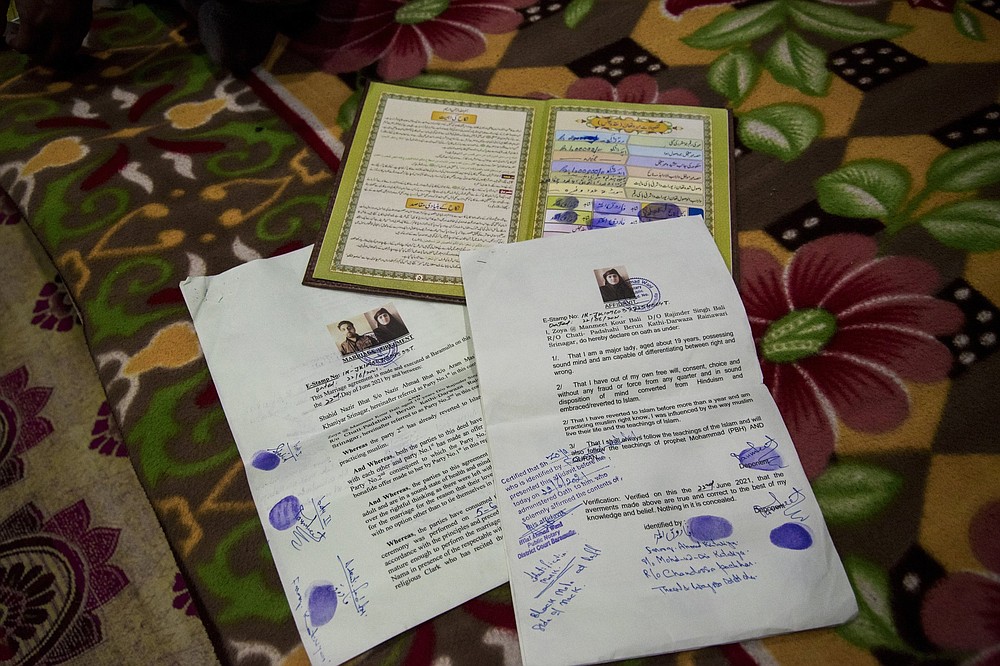 Papers show that Manmeet Kour Bali is legally married to Shahid Nazir Bhat and that she has willingly converted to Islam, in Srinagar, India. The couple married in June, the year after lawmakers in one northern Indian state passed legislation making religious conversion by marriage an offense punishable by up to 10 years in prison. (The New York Times/Showkat Nanda) 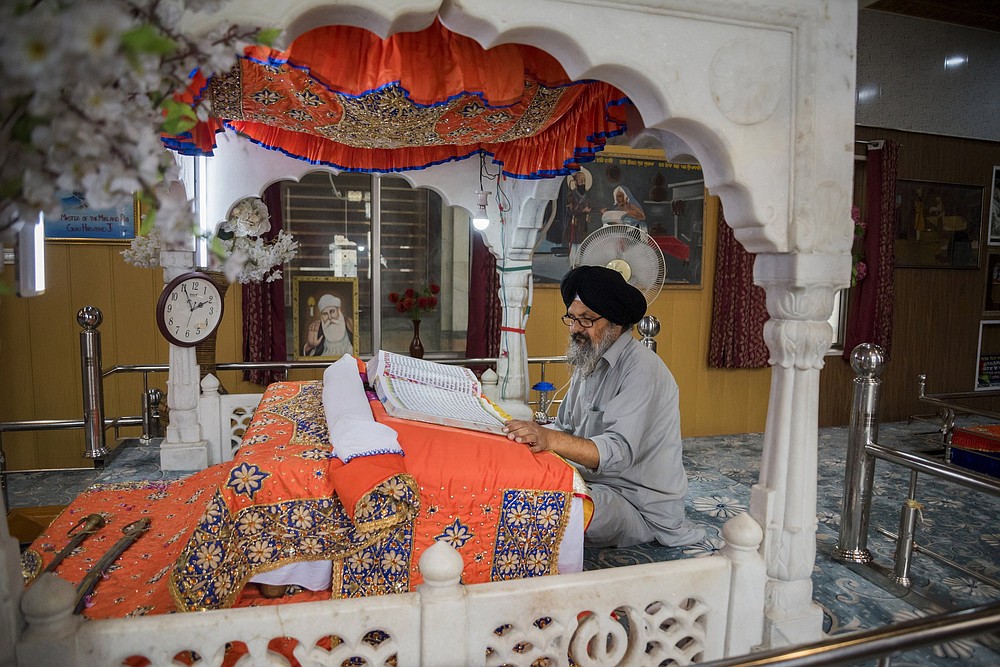 A man reads from a book of religious scripture inside the Srinagar, India-based Chatti Padshahi, a Sikh place of worship, called a gurudwara. (The New York Times/Showkat Nanda) 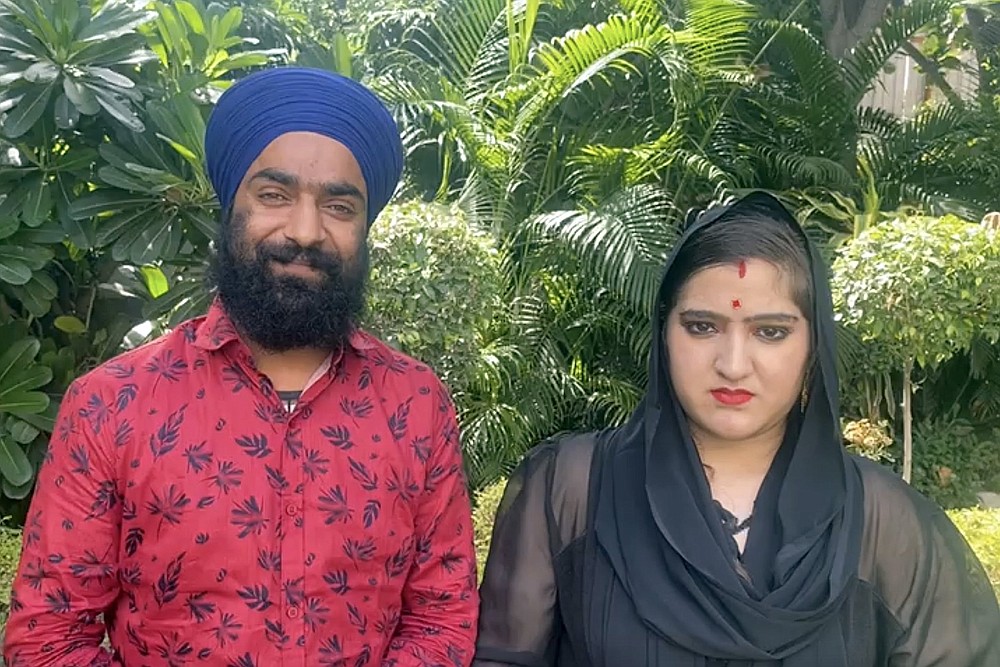 A photo provided by Manjinder Singh Sirsa, the head of the largest Sikh temple, in New Delhi, shows Manmeet Kour Bali (right), with her second husband. Days after appearing in court to defend her conversion to Islam to marry a Muslim man, Bali was married to a Sikh man. (Manjinder Singh Sirsa via The New York Times)

Print Headline: 'Til faith do us part