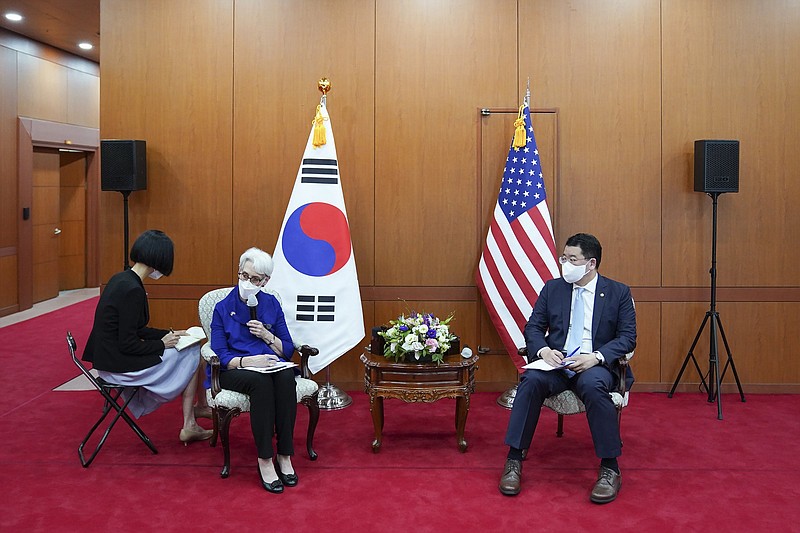 SEOUL, South Korea -- America's No. 2 diplomat Friday expressed sympathy for North Koreans facing hardships and food shortages linked to the coronavirus pandemic and renewed calls for the North to return to talks over its nuclear program.

North Korean leader Kim Jong Un has recently warned of a "tense" food situation and admitted his country faces "the worst-ever" crisis. But his government has steadfastly insisted it won't rejoin the talks unless Washington drops its hostility, an apparent reference to U.S. sanctions.

"We all feel for the people of the DPRK [Democratic People's Republic of Korea], who are indeed facing all the most difficult circumstances given the pandemic, and what it means as well for their food security," U.S. Deputy Secretary of State Wendy Sherman told reporters in Seoul.

"We only hope for a better outcome for the people," she said.

Sherman spoke after meeting South Korean officials, with both nations reaffirming that they will continue diplomatic efforts to persuade North Korea to return to the nuclear talks.

"We are looking forward to a reliable, predictable, constructive way forward with the DPRK," Sherman said. "We have offered to sit and dialogue with the North Koreans, and we are waiting to hear from them."

Some experts say North Korea may be compelled to reach out to the United States if its economic difficulties worsen, although outside monitoring groups haven't reported any signs of mass starvation or social chaos in North Korea.

In recent speeches, Kim has called for his 26 million people to brace for prolonged covid-19 restrictions, indicating the country wasn't ready to reopen its borders despite the toll on its economy.

Covax, the U.N.-backed program to ship vaccines worldwide, said in February that North Korea could receive 1.9 million doses in the first half of the year. But UNICEF, which procures and delivers vaccines on behalf of Covax, said recently that North Korea hasn't even completed the paperwork for receiving the vaccines and that it was unclear when they could be delivered.

After Seoul, Sherman is to travel to Mongolia and then China, the North's last major ally and benefactor. She will be the highest-ranking U.S. official to visit China since President Joe Biden was inaugurated in January.

Sherman said she will discuss North Korea with Chinese officials, saying Beijing "certainly has interests and thought" on it.

"The Biden administration has described our relationship with China as obviously a complicated one. It has aspects that are competitive, it has aspects where it is challenging and aspects where we can cooperate," she said. "And thinking together about bringing the complete denuclearization of the Korean Peninsula is certainly an area for cooperation."

However, China has adopted a confrontational tone, reflecting the sharp deterioration in relations with Washington.

The U.S. is "defining China as a competitor, provoking confrontation, and containing and suppressing China's development," Chinese Foreign Ministry spokesperson Zhao Lijian said at a daily briefing in Beijing. "The U.S. side has been calling for dialogue with China from a position of strength, which only reflects its arrogance and hegemony."