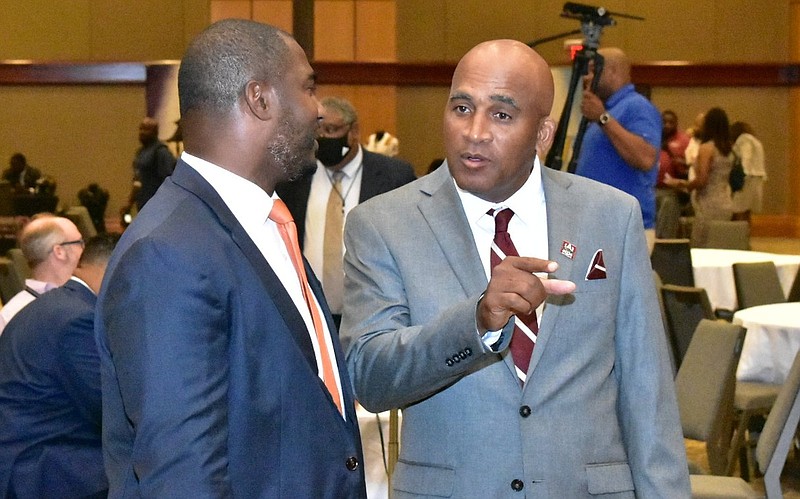 Editor’s note: This is the fifth and final part in a series previewing the football season for the University of Arkansas at Pine Bluff and the Southwestern Athletic Conference.

BIRMINGHAM, Ala. — More than two months after winning the Southwestern Athletic Conference championship, Alabama A&M University was not left with much time to rest on its laurels.

The Bulldogs took “a couple” of weeks off after beating the University of Arkansas at Pine Bluff 40-33 in the championship game to finish the spring season 5-0. But fourth-season Coach Connell Maynor didn’t appear concerned during SWAC Media Day about burnout settling in with his team, which hosts UAPB in the regular season finale Nov. 20 in Huntsville.

“We’re still in football shape,” Maynor said. “It seemed like it was just last week when we won a championship. It’s been a couple of months. And now, we’re three weeks away. The guys’ feet are up under them, and they’re excited about the fall season now, proving some people wrong and proving some people right.” Maynor and two of his offensive weapons, quarterback Aqeel Glass and wide receiver Abdul-Fatai Ibrahim, commanded a large crowd of Alabama television crews around their table to hear from the team that SWAC coaches and sports information directors predicted will repeat as Eastern Division champions — even with Jackson State University’s Deion Sanders just tables away.

“We’ve got two X’s on our backs,” Maynor said. “We won the championship last year. I think we’re picked to win it this year. Everybody’s coming after us. We’re the hunted. We have to be ready. We have to run harder, work harder. We have to do extra.” Glass, the reigning SWAC Offensive Player of the Year, threw for 271 yards and three touchdowns — although UAPB sacked him five times — in the May 1 championship game. Ibrahim had six catches for 61 yards.

Glass threw for 1,084 yards and 13 touchdowns last spring but has found room for improvement.

“Make my strengths stronger and my weaknesses stronger as well,” Glass said. “Just work on a couple of things, not forcing it — my accuracy and my footwork, speed and agility and all of that. Just continue to improve.”

Of the 10 teams in the SWAC before Florida A&M and Bethune-Cookman universities joined, Alcorn State University was the only team not to play a single down of football during the 2020-21 school year amid the covid-19 pandemic.

The players voted not to, and the coaches agreed, quarterback Felix Harper confirmed.

“I feel like it’s never a negative,” Harper said. “Everything’s a positive. Things happen for a reason. We made that decision together as a team to opt out due to the circumstances that were going on for our program, so we’ll be well prepared for the upcoming season.” The decision came at a cost. Not only was Alcorn State credited with a loss for each game it canceled, but what would have been home games against Southern University and Mississippi Valley State University have been moved to Baton Rouge and Itta Bena, Miss., respectively, the SWAC announced when Alcorn State opted out. In addition, a future game against Alabama A&M will be played in Huntsville.

“It’s going to be very much useful that we took that break,” defensive back Taurence Wilson said.

SANDERS IN THE NEWS

On a national scale, the main headline from SWAC Media Day was Deion Sanders walking out of a Zoom interview with a Jackson (Miss.) Clarion-Ledger reporter after he called the second-season Tigers head coach by his first name a second time after Sanders asked to be addressed as “Coach.” The incident occurred in a room next to the Sheraton Birmingham ballroom where radio and virtual interviews were held. Inside the ballroom was the main stage where the ESPN3.com broadcast of SWAC Media Day was streamed live, and team tables and a dining area were set up.

On the stage, Sanders said he was glad to have a spring season, in which the Tigers finished 4-3 overall and 3-2 in the SWAC.

Jay Walker of ESPN asked Shedeur Sanders how he prepares for what he’ll see on the college level as a quarterback.

“You just got to do what you got to do off the field,” Shedeur Sanders said. “Whenever you watch film, whenever you just work on mechanics, study defensive fronts and things like that, it’s easy.”

Grambling State University went 0-4 during the spring, becoming the unlikely bottom-feeder of the SWAC Western Division.

The Tigers changed offensive coordinators twice during the spring, with Mark Orlando and Kendrick Nord stepping down. Nord is now the quarterbacks coach at UAPB.