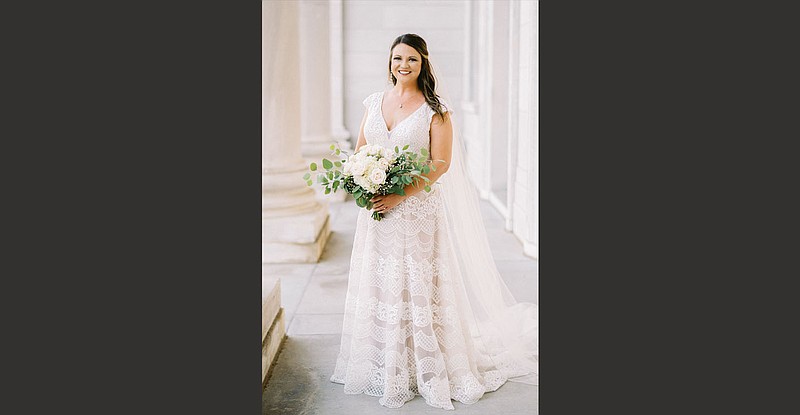 Parents of the groom are Erin and Walter Hiram McSpadden of Little Rock. His grandparents are Ruth and Ronald Wilson McNulty of White Hall and the late Catherine and Otha McSpadden of Batesville.

The bride, given in marriage by her parents, wore an ivory and champagne gown embellished with lace and beading. The V-neck bodice had cap sleeves and the skirt with a scalloped hem extended to a sweep train. Her cathedral-length veil was edged with beads. She carried a bouquet of blush and cream colored roses, white hydrangeas and pink peonies.The bouquet included a blush ribbon tied with a charm featuring the bride's late grandparents and a miniature heirloom Bible from the groom's family.

Serving as matron of honor was Allyson Pittman Gattin of Little Rock, sister of the bride. Maid of honor was Jennifer Thompson of Washington. Bridesmaids were Mary Elizabeth Sixbey and Lizzy McSpadden, sister of the groom, both of Fayetteville; Mary Daniel Morgan of Houston; Shelby Bardwell of Springdale; Lillie Peterson, Caroline Ragon and Emily Gassman, all of Little Rock; and Amanda Kules of Washington. They wore dusty blue chiffon gowns and carried bouquets of roses, hydrangeas and eucalyptus.

Flower girls were Nora Grace Gattin and Willa Gattin, both of Little Rock and nieces of the bride.

Serving as the groom's honor attendants were his father and Will McSpadden of Little Rock, brother of the groom.

A reception was held at the the Capital Hotel. Dinner tables were centered with glass trumpet vases filled with white hydrangeas, gypsophila and blush roses. Assisting were Rebecca Moll and Morgan Carrico.

The bride is a graduate of the University of Arkansas with bachelor's and master's degrees in social work. She is a nonprofit and advocacy consultant.

The groom has bachelor's degrees in political science and religious studies from East Carolina University. He is a project manager at Akel's Carpet One.

The couple will make their home in Little Rock after a honeymoon in Cabo San Lucas, Mexico.