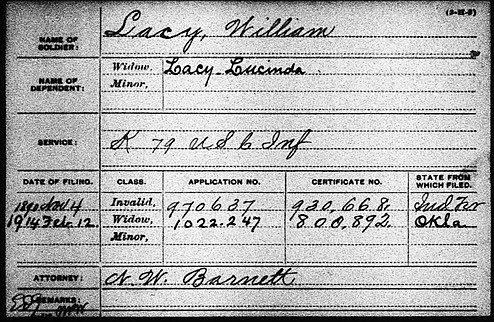 A copy of the card found by Ancestry.com researchers that shows that Osborne's great-great-grandfather, William Lacy, served during the Civil War. MUST CREDIT: Calvin Osborne

Several times a year for almost three decades, Washington, D.C., resident Calvin Osborne has suited up in a Civil War uniform to reenact the stories of Black soldiers who fought for the abolition of slavery.

Ever since he saw the 1989 movie "Glory," about one of the Union Army's first Black regiments, Osborne said, he has felt a calling to honor Civil War troops of color.

"That movie shook my soul," said Osborne, 59, who is the associate director of the D.C. Office of Federal and Regional Affairs. "Until that time, I didn't know that Black soldiers had fought for their own freedom."

Osborne joined the District's Black Civil War reenactment group, Company B, and is now president of the volunteer organization. He said he has found purpose in researching the lives of Black Civil War soldiers, most of whom were once enslaved.

But last year, he found out about an even more personal connection to the Civil War: He learned his great-great-grandfather, William Lacy, had escaped slavery at age 14, then fought in the Civil War.

"When they told me he was my great-great-grandfather, it was all I could do to hold back tears," Osborne said.

Now, after years of portraying various Black Union Army soldiers at Civil War reenactments around the country, Osborne plans next month to button up his Civil War uniform and reenact scenes from his great-great-grandfather's life.

He will do it at the dedication of a new headstone for Lacy's grave in Broken Arrow, Okla., near Tulsa, where Lacy spent his final years.

"What were the odds that I had spent 28 years reenacting these soldiers' lives, only to learn that my own great-great-grandfather had actually been there?" he said. "It gave me goosebumps."

Shortly after he learned of his great-great-grandfather, Osborne found out that Lacy was buried in the Thomas Smith Cemetery, and so he drove to Oklahoma with his wife, Tracy. He said he was saddened to see that Lacy's grave marker and the marker of his wife, Lucinda Lacy, had toppled over.

He was able to prop up Lucinda Lacy's marker but had to order a new headstone for William Lacy from the Department of Veterans Affairs, he said.

When the new marker is installed Aug. 14, Osborne said, he will gather with a dozen new cousins he found online after he learned about Lacy.

"I've found family members I didn't know I had," he said. "I'm going to give them a living-history presentation about William Lacy's life. I don't know what he looked like, but I'm going to dress like he dressed, imagine what he must have felt in battle and bring him out of the grave."

Osborne said he plans to read a first-person script he wrote after he imagined for several months what William Lacy would tell people today about his life.

"Basically, this will be his living history," he said. "I'm hoping to put some meat on the bones of his name."

"There's an old saying that you don't choose the person you're going to impersonate, they choose you," Osborne added. "That's how I feel. William Lacy chose me. Now I want to find out everything I can about him and pass that along."

Osborne said his own roots began in Tulsa, about 14 miles from Broken Arrow. After high school, he received a bachelor's degree in management and economics from William Jewell College in Liberty, Mo., then graduated with a law degree from the University of Missouri at Kansas City in 1988.

He moved to D.C. in 1992 and worked as an attorney for several federal agencies before starting his current job 3½ years ago, he said.

Osborne's quest to learn more about his family history began last summer, he said, after he came across the Ancestry.com website and commented on a post, saying that he was a Black Civil War reenactor whose father was a World War II veteran. Osborne knew nothing about his family generations before his grandfather, he said.

A few days later, Osborne heard from an Ancestry historian, wondering if he would be willing to have the company research his family history and be interviewed about its findings.

The company frequently contacts people on social media with free offers to research their family stories, according to Crista Cowan, an Ancestry corporate genealogist.

"Calvin shared his extraordinary story with us when we invited customers to tell us about ancestors in the military," Cowan said, noting that Osborne provided information about his father's war service.

Osborne said he didn't think twice about participating when he was asked if he'd like some help digging further into his past. It would not include a DNA test.

"I'd always wondered about my family's history and where it might lead," he said. "Ancestry did this deep dive into my background, then came back to me and said they'd found some interesting stuff."

When the Ancestry crew arrived at his home in the Penn Branch neighborhood of southeast Washington last year, one of the genealogists handed Osborne a document and told him to turn it over and read it, he said.

"It was an official card that documented the service of a Civil War soldier named William Lacy," Osborne said, adding that they explained Lacy was his great-great-grandfather.

For a moment, said Osborne, he wondered if somebody was playing a joke.

"I told them, 'Don't play with me. I'm a Civil War reenactor who tries to honor these people and Black history every chance I get,'" he said. "But they assured me it was all very real."

Osborne said he was shocked to learn that Lacy was a member of the First Kansas Colored Infantry, the first group of Black soldiers recruited from Northern states to serve in the Civil War. Between 1863 and 1865, nearly 200,000 Black men served in the Union Army and Navy.

Osborne said he also learned that like most of the men in the Black Kansas regiment, Lacy had been enslaved -- at 14, he escaped in Alabama and went to Kansas.

"He was a free man, but even after he got married in 1863 and had a newborn baby, he chose to go fight in the Civil War when he was 17," he said. "When I learned that, it was so profound and personal. I thought, 'This guy fought for me.'"

In the late 1800s, Lacy, a father of seven, moved to Oklahoma to a farm with his wife, Lucinda Lacy, according to a Tulsa Star obituary that Osborne found. He lived there until his death on Jan. 25, 1914.

In the past, Osborne said, he often portrayed better-known Black Civil War soldiers, such as Cpl. James Henry Gooding, at presentations with his reenactment group. Gooding wrote a letter to President Abraham Lincoln demanding to be paid the same wage as white soldiers.

"For years, I did Civil War research about people I didn't know," Osborne said. "Knowing about William Lacy now makes me feel whole. I'll be portraying him every chance I get."

He said he hopes that more digging will eventually allow him to learn more about his family tree and track down the ancestors who were forced from their homeland and sold into slavery.

"I want to ride that carpet as far back as I can," he said. "Finding out the truth about my family has made me feel so much richer."

"It isn't just that I found some guy in my past," Osborne added. "I found a guy who fought for my freedom, a guy who took lashes across his back and said, 'No, I'm not taking it anymore.' William Lacy had courage. He's added weight to my shoes." 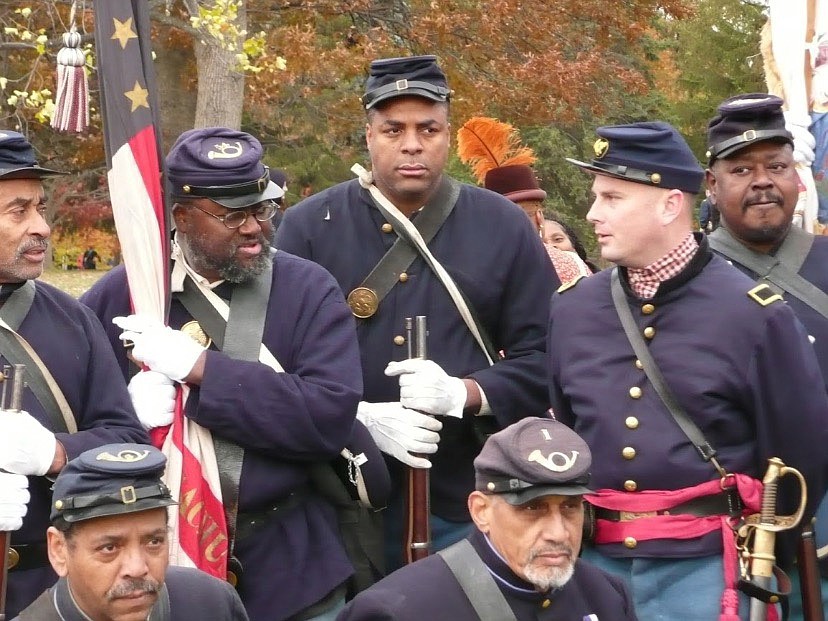