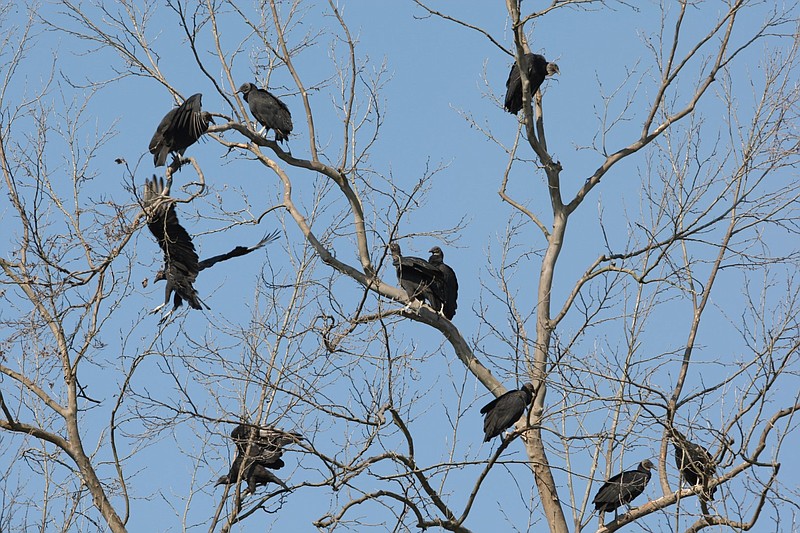 Black vultures roost in a tree near Snowball in Searcy County in this September 2007 file photo. (Arkansas Democrat-Gazette file photo)

Ronnie Horn saw the newborn calf moving awkwardly and slowly as he drove past the pasture on his way to work at the Washington County Extension Service. He resolved to check on it after work.

He found the calf dead that evening two months ago at his farm near Lincoln. The body bore all the signs of a predator attack.

"I don't want to be graphic, but black vultures have a definite method of operation in how they attack," Horn said. "There's no mistaking it."

Black vultures kill an unknown number of cattle in Arkansas each year, and the attacks have grown from a rare occurrence into a frequent one, according to cattle owners, groups representing them and regulators.

The Arkansas Farm Bureau Federation, which advocates on behalf of farmers and other rural residents, recently obtained the needed federal permission to kill a limited number of the birds. Livestock owners can go through the federation's website to obtain one of the 100 permits available. Killing as few as three vultures should protect a herd if their carcasses are left posted as a warning to the others, according to federal guidelines.

"I've lost calves every spring and fall for the last five years," said Matt Carter, who raises cattle near Batesville.

He lost seven calves in no more than three weeks in 2015, he said. He has seen the birds perch on the hindquarters of a cow, attacking a calf as it's being born.

"They aren't afraid of you," Carter said. "I've ridden into flocks of them on a four-wheeler to scare them off, and they didn't scatter until I got there."

Yet all the data is anecdotal, creating at least the danger of missing other problems, said Joe Neal, a retired wildlife biologist and co-author of a book on the birds of Northwest Arkansas.

"I'm the last person in the world who'd tell you black vultures have never gotten a calf out in a field. I'm sure it happens," Neal said.

But he cited a 2017 case in Newton County where the birds were blamed for some calf deaths. Investigators found that a pack of feral dogs was responsible. The birds gathered at the calf carcasses and were seen as the culprits.

No one keeps track of attacks statewide attributed to vultures, all sides acknowledge.

"They do some real damage, but no one can say at what level," Neal said. "Farmers don't have time to stand around in their fields all day watching their cattle."

Farmers and even cattle have few doubts on the matter, Carter said.

"I saw a cow running in circles around her calf" to fend the birds off from what seemed like 100 of the predators, Carter said. "When I got there and they flew away, she fell to the ground exhausted but she'd saved her baby."

Nothing suddenly turned black vultures aggressive, Burkham said. The attacks began because a century-old effort to protect a wide variety of birds worked, he said.

The Migratory Bird Treaty Act of 1918 brought the United States into a treaty with Canada to prohibit the killing, capturing, selling, trading and transport of certain protected bird species. Mexico, Japan and Russia joined the treaty in later years. Black vultures are protected by this migratory-birds treaty, but they do not migrate much, Burkham said.

Audubon Societies throughout the United States track birds yearly in their "Christmas bird count," Neal said. He is secretary for the Northwest Arkansas Audubon Society.

"We only saw these birds in the winter sporadically in the 1970s and '80s" in Northwest Arkansas, he said. "Then in the 1990s, we started seeing them every year."

The bird's expansion into Northwest Arkansas coincides with a boom in the region's deer population, and the two are clearly related, Neal said. Deer -- through natural death, and being hit by vehicles or fatally injured -- increased the local food supply for vultures.

The deer population of Northwest Arkansas started booming in the 1990s thanks in part to restrictions on hunting in the region imposed by the Game and Fish Commission in previous decades. Commission records confirm Neal's statements about the increased deer population.

Black vultures flourished too, and now outnumber the carcass supply that once kept them fed, Burkham said.

Another contributing factor in the vultures' attacks on livestock is the necessary and proper disposal of dead poultry and livestock for health and environmental reasons, Horn said.

"We do a pretty good job of disposing of our carcasses" when cattle die, he said of Arkansas cattle farmers in general. The same goes for poultry operations, he said.

Protected species under the treaty range from the Siberian accentor to the common yellowthroat, according to a list maintained by the U.S. Fish and Wildlife Service.

Exceptions are allowed for the killing of limited numbers of birds that become a threat, but any killing in the United States must be specifically permitted by the federal Department of the Interior.

The Arkansas Farm Bureau Federation applied for and got "depredation" permits on behalf of Arkansas livestock owners. Each of 100 permits available allows the killing of three of the vultures with a provision to take two more if needed. The available permits would allow the culling of 500 birds in Arkansas at most.

The permits require the posting of the slain birds as a warning to others, according to the U.S. Fish and Wildlife Service. That agency of the Interior Department approved the Farm Bureau's request. The vultures hunt in groups and are wary of entering an area where one of their number was killed and the body remains, said John Bailey, spokesman for the federation.

Arkansas is not the first state to get these permits or the worst affected by the vultures, Bailey said. He cited the assistance of Robert Byrd, Arkansas director of the Animal and Plant Health Inspection Service of the U.S. Department of Agriculture, in getting Arkansas added to a limited federal pilot program trying to reduce the number of vulture attacks.

There was a process to get a permit already in place, but applying for and getting such a permit takes months, Byrd said. The pilot program can issue a permit within days, he said.

Kentucky began issuing the pilot program permits in 2015, according to news accounts from that state. Kentucky residents raise more sheep and goats than in Arkansas, and those smaller animals suffer more of the attacks than cattle do, according to those accounts.

The Farm Bureau hopes the permit process helps the group gain an idea of how many of these attacks there are in the state, Bailey said.

Burkham said he has heard of vulture attacks on cattle since at least 2015. News accounts from eastern Arkansas report attacks before then.

The vultures' preferred prey in Arkansas is newborn calves, but the birds have been known to attack older, sick cattle and healthy cattle delivering their calves, Burkham and others said.

The birds attack their prey's eyes first to render the animal helpless, then attack soft portions of the body, according to Bailey and others.

"This one was the first calf for that cow," Horn said of the attack at his farm.

An older, more experienced cow would have known to take her calf into a thicket or woods when birds approached and to stand close by, he said.

He'd seen the birds in an old dead oak tree near his pastures, Horn said. Dead trees are the bird's preferred roost.

He heard about vulture attacks in previous years, but had never had one at his farm before, he said. He recently heard reports of more attacks in Carroll County in the Eureka Springs area, in Prairie Grove, Elkins and other attacks near Lincoln.

"I was almost skeptical. I'm not skeptical anymore."