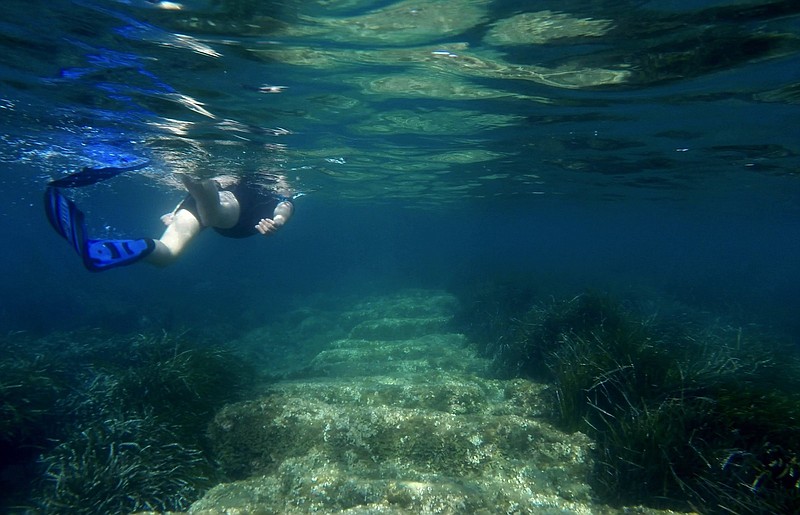 Cyprus Antiquities Department official Yiannis Violaris snorkels over submerged stone remains of the ancient harbor next of Amathus ancient city, in the eastern Mediterranean island of Cyprus, on Thursday, July 1, 2021. Lying just a few feet underwater a mere 200 feet off the coastline near the resort town of Limassol, this 2,400 year-old harbor said to be built Alexander the Great's successors will soon be Cyprus' newest tourist attraction where adventurous holidaymakers could snorkel over its submerged stone remains. (AP Photo/Petros Karadjias)

AMATHUS, Cyprus -- It's said that Demetrius the Besieger, a mighty warrior king and one of Alexander the Great's successors, built this harbor on Cyprus' southern coast 2,400 years ago to thwart a potential naval invasion from the ruler of Egypt, Ptolemy I, another of Alexander's heirs.

French archaeologists who initially studied the ancient harbor of Amathus believe it to be an incomplete military fortification work, the three piers of which would have accommodated the best of the ancient world's naval ships, ready to repel an attacking force.

Lying just a few feet underwater a mere 200 feet off the coastline near the resort town of Limassol, the harbor will soon be Cyprus' newest tourist attraction where adventurous vacationers can snorkel over its submerged stone remains.

It's a novel direction for Cyprus' tourism authorities, who are looking beyond the east Mediterranean island nation's long-held "sun and surf" product to reach out to specialized tourism markets.

The covid-19 pandemic has slashed tourism arrivals for an island that relies much on that revenue, so Cyprus authorities are taking a fresh look at what the island has to offer visitors, to re-ignite interest among those who do opt to travel.

Cyprus Antiquities department official Yiannis Violaris says what makes the harbor unique to the entire eastern Mediterranean is its state of preservation, combined with its proximity to the coastline.

He says those attributes could bring more people amid a global surge of interest in diving tourism. The fact that Cyprus has earned top marks for the cleanest waters among all other European Union nations for the second year running is also a big bonus.

"Tourists as well as local visitors will have the opportunity to see this impressive ancient harbor, to swim over it and to see how it was constructed, with three moles enclosing it," Violaris told The Associated Press.

Specialist diving crews are currently cleaning the harbor of vegetation and will mark underwater routes that swimmers can follow on their tours.

Diving tourism isn't entirely new for the island. Divers have for years been flocking to the wreck of the MS Zenobia, a Swedish-built ferry that sank in about 140 feet of water just over a mile off the coastal town of Larnaca in 1980.

The wreck has been ranked as one of the world's best for divers. But diving shop owner Michalis Sinopouris says authorities need to do a lot more to put Cyprus solidly on the global diving map, like scuttling larger ships near the coasts to create artificial reefs.

Tourism directly accounts for around 13% of Cyprus' economy. According to the latest available figures, tourist arrivals between January and February this year marked an 86% drop from the same period in 2019 when Cyprus hit an all-time high in the number of travelers who opted to vacation on the island.

Tourism officials had hoped for the industry to rebound this month once the U.K. and Russia -- Cyprus' top two markets -- had put the island on their "green" list of safe destinations. Now they're hoping that August may be the turnaround month.

Industry bosses recognize that the sector is hardly "out of the woods" and are urging a rethink on how to market Cyprus' tourism product.

Hotels Association Chief Haris Loizides said at an industry conference earlier this month that the country's tourism "needs to adapt dramatically to survive and continue its critical contribution" to the economy.

He proposed a greater focus on the "big picture" of what Cyprus has to offer, like local culture and cuisine, while reaching out to niche markets through digital marketing.

"The sustainability of the mass market is being questioned," Loizides said. "I dare say massive gatherings will gradually become things of the past."

It's a message that Cyprus' deputy ministry for tourism has taken to heart, redesigning its logo and reaching out to new markets.

"I don't lose my courage and my optimism because the EU is a big market, so many, many countries, and they feel that the psychology for travel is only now starting to pick up in Europe," Tourism Deputy Minister Savvas Perdios told the AP.

Perdios said authorities are working to extend the vacation season with the launch of a "game changing" campaign dubbed "Heartland of Legends" where tourists can visit a village and witness locals making the island's world-famous Halloumi cheese, among other experiences.

Perdios said despite the drop in arrivals from the U.K. and Russia, he's encouraged by the digital interest that potential vacationers from nontraditional markets such as France and Germany are showing in traveling to Cyprus.

"We have been working on these markets. ... Things won't happen from just one day to the next, so I'm still optimistic," said Perdios.

Perhaps Demetrius the Besieger would have approved. 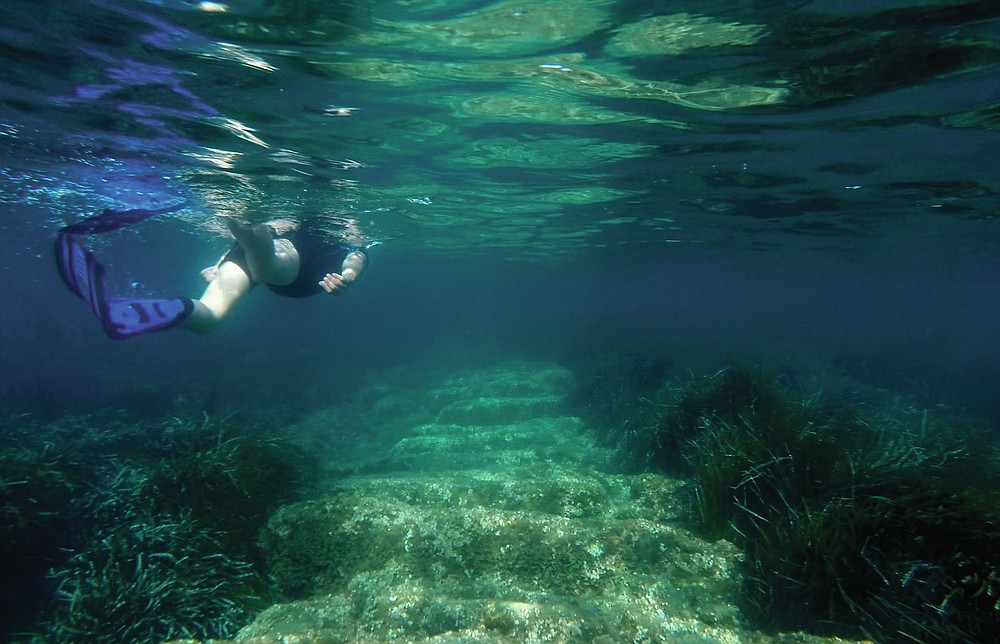 Cyprus Antiquities Department official Yiannis Violaris snorkels over submerged stone remains of the ancient harbor next of Amathus ancient city, in the eastern Mediterranean island of Cyprus, on Thursday, July 1, 2021. Lying just a few feet underwater a mere 200 feet off the coastline near the resort town of Limassol, this 2,400 year-old harbor said to be built Alexander the Great's successors will soon be Cyprus' newest tourist attraction where adventurous holidaymakers could snorkel over its submerged stone remains. (AP Photo/Petros Karadjias)