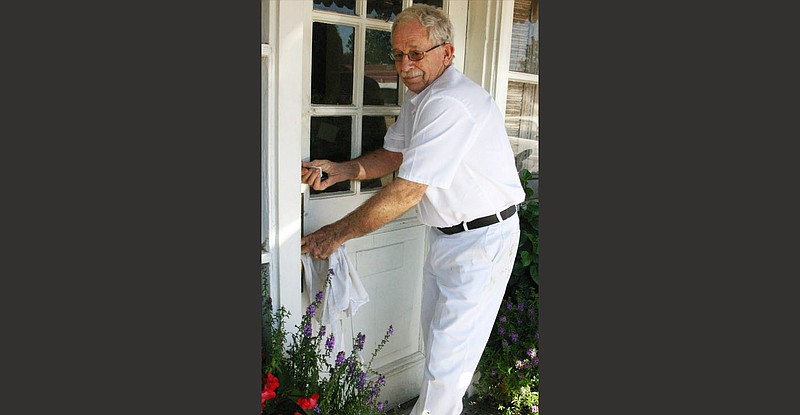 Norman August Klappenbach, who died June 26, is shown locking the bakery doors for the last time Nov. 2, 2011. His wife, Lee Klappenbach, said of this scene: “He seemed very pleased with himself.” (Special to The Commercial/Deborah Horn)

What constitutes a legend? Is it getting up without complaint at 2 a.m. five days a week for 37 years to make the fresh baked goods customers were clamoring for? Or perhaps hosting heads of state as return customers including a president, governors and countless lawmakers? Maybe it's shipping world-renown cookies, breads and pies all around the globe or being the template for a great father, husband and friend.

Anyone who had the pleasure of knowing him will readily tell you, Norman August Klappenbach embodied all these characteristics.

Klappenbach died at age 89 on June 26. He and his wife, Lee, locked the doors of their much beloved bakery in Fordyce for the last time nearly 10 years ago on Nov. 2, 2011.

His obituary read, "He was born December 24, 1931 in Wadena, Minn., to the late August William and Anna Marie Becker Klappenbach. Klappenbach started his lifelong baking career as an apprentice at the age of 14. After graduating from high school in Lewiston, Idaho, he enlisted in the Air Force, married Agnes Lee Barker from Kingsland and was a baker at Lackland Air Force Base in San Antonio. Discharged after four years, he continued his career by attending Dunwoody Institute in Minneapolis and then working for Albertson's in Washington state."

"I was raised in Arkansas until my dad got transferred to Lewiston, Idaho, with Potlatch," said Lee. "That was Norm's hometown and where we met. We started dating when I was going into the 10th grade so you could say he has guided me my whole life. We were married in 1952 while he was still in the Air Force living in San Antonio."

"It wasn't until many years later when we came back to Arkansas to visit my parents that Norm considered moving the bakery we had in Walla Walla, Wash., to Arkansas. He looked around the area and said, 'I think this place needs a good bakery.' Soon after we loaded up an 18-wheeler with all our household stuff and the bakery equipment and moved to Fordyce," Lee said.

"He was truly a Christian and never criticized other people or his adopted home," Lee said. "And like all fathers, he loved his sons, Mark, Tim and Paul."

Norm worked hard, fast and steady, Lee said. "He learned to do that in his early days managing bakeries for Albertson Food Centers on the West Coast. Every time they opened a new store, they sent Norm to set it up. One of our reasons for moving to Arkansas in '75 was we had three boys and wanted to choose the home where we raised them and stop moving around with his work all the time."

"I grew up in the bakery and worked with Dad several years after college before moving to Memphis. I arrived back in Fordyce in 2002 and worked there until it closed in 2011," Paul said.

He went on to say, "Two years before we closed we had a major fire. It was mostly smoke and water damage that shut us down for about four months to remodel. We kept all six employees so they wouldn't be without work. They helped with pantry cleanup and some painting."

That's the way the elder Klappenbach was, according to his wife.

"He wanted to make sure people were taken care of and provided for. It was a tough time but it was clean and very nice when we reopened," she said.

The brightly lit bakery and adjoining deli were furnished with antique tables and chairs and decorated with collectible woodcarvings, a carousel horse and numerous signs hanging on the walls including a large Mobil Oil winged Pegasus.

"That was when dad handed operations over to me," Paul said.

They had a run-in with the insurance man after the fire and Klappenbach looked at Paul and said, "you take charge and handle it,'" Paul said. "That was it, he turned loose the reins and never tried to interfere with my decision making thereafter."

"After that, the rent went up on the building, and the cost of labor was climbing because Mom and Dad were ready to retire and couldn't do all the work they had always done," he said.

Lee chimed in, "Norm had health problems that would have made anyone else retire long before. Paul enabled us to keep going for a number of years past our prime. He has a real knack for it. Like his father, he was a natural baker and his dad taught him well."

A pilgrimage to Klappenbach's made Fordyce a destination for many. The popular eating spot also played host to many organizations that held catered meetings in the private dining room with large windows looking out on West Fourth and Main streets.

"Rex Nelson and Richard Mason loved and wrote about the bakery quite often," said Lee.

"Gov. [Bill] Clinton often dropped in for lunch when he was attending functions in the area, and Mike Huckabee along with every congressman and senator from our district were regular customers."

But you didn't have to sojourn to Fordyce to enjoy the baked goods.

Paul explained, "The shipping business began when I came back from college. Southern Living put a small article in their magazine that said a perfect gift is a box of pound cakes, breads and cookies from Klappenbach's. You could order all our breads. Cinnamon raisin was our top seller followed by cinnamon date. Sour dough was also very popular."

Lee added, "We shipped thousands of gingerbread men to our loyal customers in New York for the Christmas season."

Klappenbach built all the iconic Klappenbach cypress shipping boxes in his shop behind their home outside Kingsland.

"Working with wood without any distractions was a good way for Norm to relax," said Lee.

Recalling the years of hard work and long hours, Lee said, "The way we had to work was in itself a good education for our boys. Our prayer was always that each of them get a college degree and do what they wanted in their lives."

That prayer has been answered. Eldest son Mark is an Arkansas Court of Appeals judge. Middle son Tim, who came back with his wife Heidi and helped run the bakery when Paul was away, is an engineer whose work has taken him all around the world.

"That's about as good a tribute for a father as you can have," Lee said.

Paul recounted, "When I was just a teenager in high school and about to go to work at a local pizza restaurant, Dad told me, 'Paul, there is always something to do, whether it's sweeping the floor or taking out the trash. I always expect you to be doing something when you are on the job.' He always emphasized the importance of hard work."

Klappenbach's was always a family affair, where kids and grandkids pitched in not only behind he counter but with tasks ranging from keeping the books to building and managing the website and setting up an inventory control program to facilitate the shipping business.

When word began to circulate back in 2011 after some newspaper articles announced the upcoming closure, the Klappenbach staff became overwhelmed with customers making a run on the products.

The elder baker and Paul found themselves producing over 1,000 loaves of bread daily to meet the need.

When a couple dozen close friends saw the situation, they volunteered, freeing the regular employees to help keep the baked goods coming.

On the final day of operations before Norman turned the key on the front door for the last time, he said with his typical knack for understatement, "We've had a good run."

Looking back on those days with a tear in her eye, Lee expounded, "It was wonderful. We really appreciated all our customers and friends. We spent so much time at the bakery that it wasn't just our job but our social life as well. I will be forever grateful for all the blessings we shared."

At Norman Klappenbach's funeral, longtime family friend and fellow church member David Archer said, "There was more to Norm than being behind the counter of that little shop on Fourth Street. Beneath the flour-covered apron and warm smile was a great heart. He was giving, sacrificing, caring, providing, generous, humble and kind. He was a quiet, hardworking man who got up way before everyone else and did his job diligently, dependably and consistently without a word of complaint. Without fanfare, without notoriety or need for attention, hidden behind the lemon bars, elephant ears, maple logs, doughnuts and good-looking girls behind the counter, Norm just pressed on. When I think of his legacy, I think of love. He loved the Lord with a life of devotion and service."

Of all the fresh ingredients that went into Klappenbach's delicacies, perhaps the most important one was cooking with love. 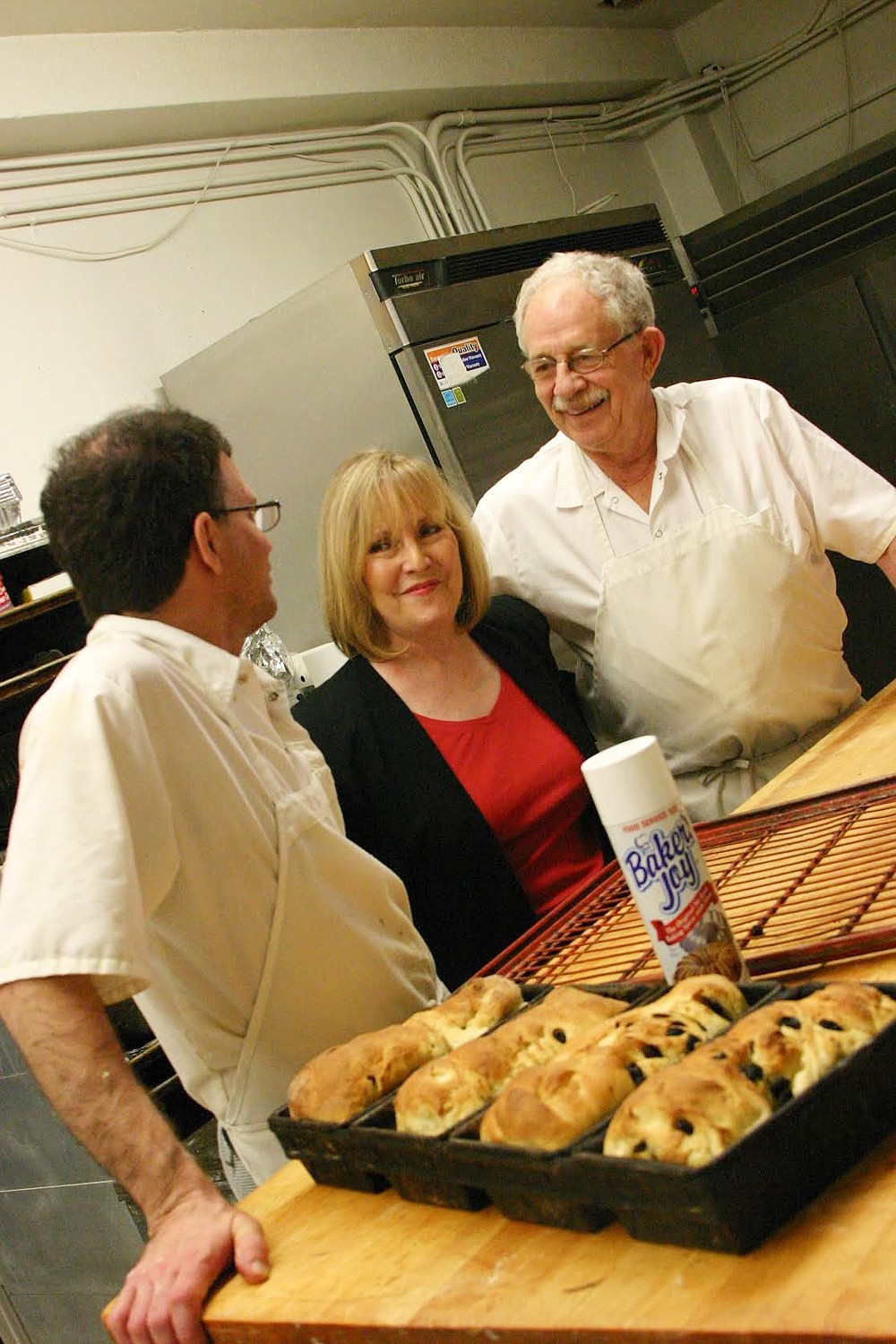 From left, youngest son Paul Klappenbach is in the kitchen with regular customer Marilyn Book and master baker Norman August Klappenbach. (Special to The Commercial/Deborah Horn)