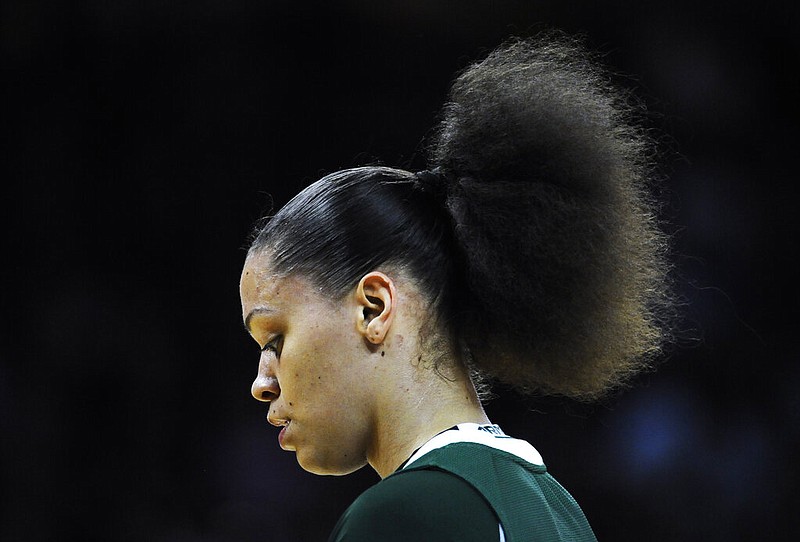 Briona Brown, then a Jacksonville (Fla.) University forward, walks onto the court during a first-round women's college basketball game against South Carolina in the NCAA Tournament in Columbia, S.C., in this March 18, 2016, file photo. Brown later became a program assistant. (AP/Rainier Ehrhardt)

Brown and current UAPB Coach Dawn Thornton (formerly Dawn Brown) were assistants at Jacksonville during the 2018-19 season. Brown spent the past three years at her alma mater and is credited with helping the Dolphins improve by four games from year 1 to year 2.

"In Briona Brown, I have made a hire that I believe will help take this basketball program to a new level," Thornton said in a news release. "She has a deep commitment to developing players into model student-athletes. I've had the pleasure in working with her while at Jacksonville University and I knew once we first connected she would be someone with a bright future in our game. Daily we work hard to put perfect examples in front of our young women to allow them to get a glimpse of what their future will look like. Coach Brown has that 'it' factor."

Brown played for the Dolphins from 2012-16, made the ASUN (formerly Atlantic Sun) Conference All-Tournament team in 2015 and 2016 and was second-team All-ASUN while helping the Dolphins win the conference tournament in 2016. Her 1,215 points (fifth all-time), 650 rebounds (fifth), 82 blocks (sixth) and 134 steals (10th) rank high among Jacksonville's career statistical charts.

She played in the Czech Republic after signing with SBS Ostrava in September 2017.

"While I am forever grateful for my time spent at Jacksonville University, I am eager to step into my new role at the University of Arkansas at Pine Bluff," Brown said. "I had the pleasure of working alongside Coach Dawn Thornton earlier in my coaching career, so when the opportunity presented itself to work for her, it was a no-brainer. "I am excited to help guide and lead these young women through obstacles and to success in order to help them become the best versions of themselves, on and off the court. Thank you Coach Thornton and the entire UAPB nation for this opportunity; it's time to get to work."