Now president of the Arkansas Trucking Association, Shannon Newton began in the industry at age 24. She uses her statistical knowledge to advocate for the importance of trucking. by Werner Trieschmann | July 25, 2021 at 2:16 a.m. 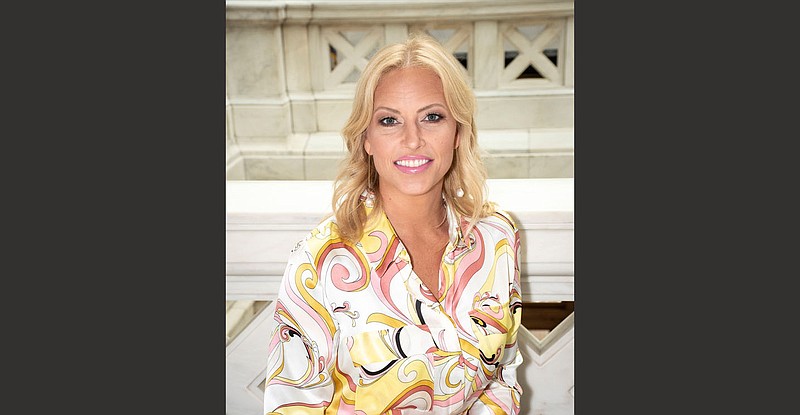 “When we were in our homes, we all ordered up various things to be delivered. We couldn’t have experiences but we could order stuff. So we needed our stuff and we wanted it tomorrow. All of that was dependent on trucks and put an emphasis on transportation of goods.” -Shannon Newton (Arkansas Democrat-Gazette/Cary Jenkins)

Shannon Newton has an astonishing fact on the economic impact on the closing of the Interstate 40 bridge into Memphis after the discovery of a crack in the structure in early May.

"If you have ever driven to Memphis, you are aware of how many trucks are on that road," Newton says. "It is one of the most heavily traveled in the country. At the start, the impact was substantial, costing the [trucking] industry $2.4 million dollars a day."

Newton's rise to being a key figure in Arkansas trucking -- a vital part of the state's economic engine -- is as surprising as it was quick. She wasted no time working for a trucking company after earning her college degree. Her ability to advocate for trucking didn't stay hidden for long and she was fast-tracked to positions of power. Being in a business filled mostly with men is only one of the obstacles Newton has overcome.

"Being a female is a greater challenge in my role, as it is critical for me to build rapport with trucking executives, legislators and other policy makers, all of which are predominantly men," Newton says. "Because I miss out on all the golf outings and hunting trips, I have to be more intentional with the opportunities available to me."

"Our industry benefits greatly from leaders like Shannon who build coalitions, generate relationships and make sure pro-safety, pro-trucking policies are enacted at the state level and supported at the national level," says incoming ATA Chairman Barry Pottle, president of Pottle's Transportation.

It's very clear that Arkansas truckers are happy to have Newton on their side, especially as vital issues to road-dependent companies such as infrastructure repair become a hot topic in Washington.

"Shannon just knows how to get things done," says Craig Harper, chief sustainability officer and executive vice president of J.B. Hunt. "She's done an incredible job representing trucking companies of all sizes, our state, and our entire industry. As the driving force behind the Arkansas Trucking Association, Shannon has a unique way of getting us all -- drivers, businesses, legislators, etc. -- to work together and support the front line of our industry as they safely deliver the goods and products that keep America moving."

A Benton neighborhood called Dogwood was Newton's home from "second grade all the way through high school."

Newton is the oldest of three siblings growing up in her house. Newton's mother was a nurse and her father was involved in various ways in the car business. Her first memory?

"I can recall having a Snoopy record player that I would carry around," Newton says. "I had those little discs you would play, you know, 45s. I've always been into music. This was in the early '80s so I am pretty sure I was listening to Olivia Newton-John and Michael Jackson. I've always entertained myself with music."

Saying she was into "traditional things" such as "dolls and Barbies," Newton also admits that her outdoor activities were limited.

"I don't like to get dirty and I am pretty risk averse," Newton says.

With both of her parents working, Newton notes that her father was an only child and so her grandparents were very involved in her upbringing.

"My grandparents would pick us up from school," Newton recalls. "They would always take us to get a Frosty after school. They were like a third parent. They always enjoyed being around me and my brother and sister."

Newton says she can be "painfully introverted" but this trait did not hinder her in the classroom.

"I always enjoyed school," Newton says. "I was put in the gifted and talented program in school. I was always in the advanced classes. I am extremely competitive. Anytime there [was] a ranking system, I was very motivated not to be left out of the top of that."

Even as a member of a family that was into the Arkansas Razorbacks enough to have season tickets, and having an athletic brother and sister, Newton says sports were not her strong suit.

"I was slow and short and there aren't a lot of opportunities for someone slow and short," Newton notes. "So in high school I switched to dance and I was on the high school dance team. Then I grew six inches."

Calling her days in high school "fun," Newton wasn't one who would spend a lot of time in a counselor's office trying to figure out what she wanted to do once high school was over.

"I'm one of those rare kids," Newton says. "I'm a firstborn and a planner. I decided I was going into accounting. I did well in math and science and didn't do as well in English. I enjoyed those math classes and liked [that] there is a right and wrong answer. I knew I was going to get a degree in accounting. I know that everybody isn't like that."

Though a lot of Newton's friends went to Fayetteville for college, she decided on the University of Central Arkansas as it was "closer to home."

It was in a UCA Composition 1 class where Newton would meet the young man she would eventually marry.

"[Josh] played basketball at UCA," Newton says. "We did not date for several years. We had mutual interests in sports and things of that nature. He is a really smart nerd. I like that."

For Newton, college didn't present a greater degree of difficulty compared to high school. She would end up with a double major in accounting and computer information systems. She has obvious pride in earning a scholarship to UCA out of high school.

"I maintained my grade point average to get eight semesters of free school," Newton says. "I didn't have the college debt I hear my friends talk about. I'm very glad I didn't have to carry that forward. I certainly appreciate that."

While Newton considers herself a hard-core planner, she didn't have an exact idea of where her dual major was going to take her after graduation day. A job in the trucking industry wasn't on Newton's radar. There was no family connection to trucking and no one close to her recommended looking for a job in that field.

"I met a recruiter for Maverick Transportation on campus and we hit it off," Newton recalls. "I had no preconceived notions about the trucking industry. But I was really sold on the people I met there. I liked the environment and having a job there meant I would stay in the Central Arkansas area. That appealed to me."

Newton's job at Maverick was in the payroll department.

"I was a backup to the driver payroll manager," Newton says. "As a 23-year-old fresh out of college, I was put in front of new-hire truck drivers. It certainly challenged me to stand up in front of a room of drivers to explain to them our procedures as they came on board."

Fast-forward to her current role.

"It's a nonprofit trade association," says Newton of the Arkansas Trucking Association. "We have 330 members and most of those are the trucking companies. We have very big companies like J.B. Hunt to someone in rural Arkansas who is running 20 trucks."

As president, Newton compares running the Trucking Association to running a small business. Interestingly, most of the positions in Newton's office are staffed by women.

"Yes, the trucking industry is overwhelmingly dominated by men, and our association staff is predominantly female," Newton says. "However, we are not a trucking company, we are a trade association. So it is not as odd as it may seem to have women employed in roles supporting public relations, communication, meetings, events and continuing education."

Newton says the pandemic has put a big, bright spotlight back on trucks and the trucking industry.

"When we were in our homes, we all ordered up various things to be delivered," Newton says. "We couldn't have experiences but we could order stuff. So we needed our stuff and we wanted it tomorrow. All of that was dependent on trucks and put an emphasis on transportation of goods."

Trucking companies were dealing with this increase in demand while, at the same time, a serious labor crunch was only beginning.

"Driver shortage has been an issue as long as I have been in the industry," Newton says. "When the economy is bad, we have just enough drivers. When the economy is good, we struggle. If you overlay that with how every other employer is having a hard time finding workers, then you know what we are facing."

There are a number of solutions Newton believes can address this issue for the trucking industry.

"The easy part is to raise the awareness for the public about the importance of trucking for the state," Newton says. "The statistic we have is that trucking and the industries that support trucking provide one in 11 jobs in Arkansas."

As for Newton, 42, she is clearly comfortable in what she does and in being an advocate to legislators and others on why trucking matters. Being one of the few females in a prominent position in the trucking industry is not much of a concern for Newton.

That environment is the same as one of Newton's nonwork passions.

"I play fantasy football," Newton says. "I have been in a league for 10 years. I'm the only girl in the league."

Studying statistics and using that to decide which players to pick for a team is right in Newton's wheelhouse. Newton's fantasy team is Vicki Vallencourt, which is the name for the female nemesis of Adam Sandler's character in the film "The Waterboy." Newton doesn't just play for fun. She indicates that she's won the league trophy a couple of times.

"If there is scoring and I can win, then I want to play."

• IF I COULD GET ON A PLANE TOMORROW (IN A NON-COVID WORLD) I WOULD GO TO: The Amalfi Coast.

• ONE THING I WANT EVERYONE TO KNOW ABOUT THE TRUCKING INDUSTRY: Our way of life is built upon trucks delivering everything from indulgence to necessity whenever and wherever we want it.

• MY FAVORITE DESSERT IS: A warm brownie with vanilla ice cream.

• I CAN'T START MY MORNING WITHOUT: Coffee.

• THE KEY TO HAVING A GOOD FANTASY FOOTBALL TEAM IS: Just like any competition, it's a combination of preparation and luck.

• THE FOUR GUESTS AT MY FANTASY DINNER PARTY WOULD BE: Justin Timberlake, Peyton Manning, Glennon Doyle and Sara Blakely.

• ONE WORD TO SUM ME UP: Competitive 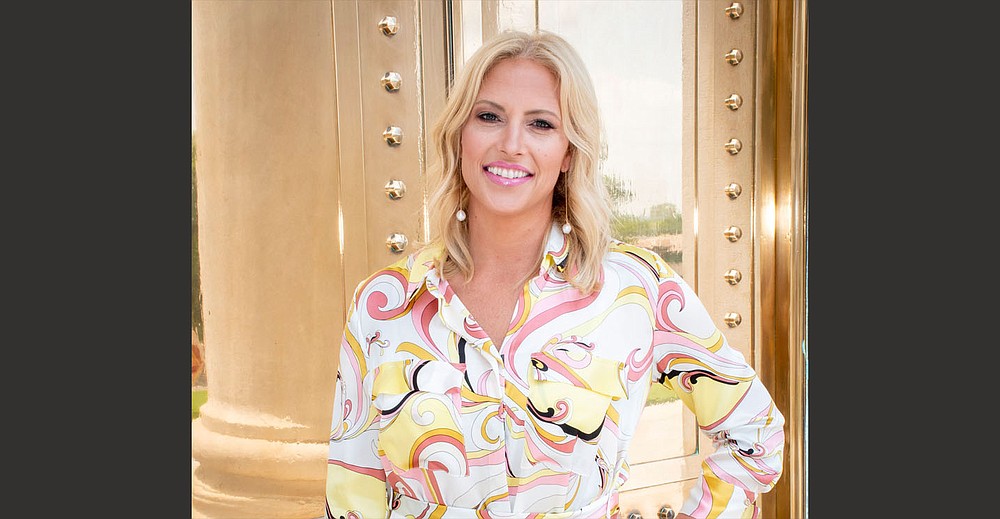 “Being a female is a greater challenge in my role, as it is critical for me to build rapport with trucking executives, legislators and other policy makers, all of which are predominantly men. Because I miss out on all the golf outings and hunting trips, I have to be more intentional with the opportunities available to me.” -Shannon Newton (Arkansas Democrat-Gazette/Cary Jenkins)