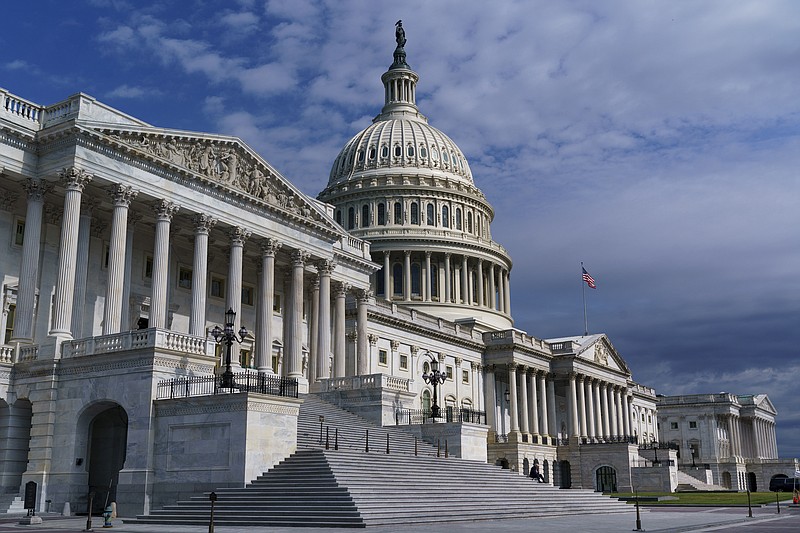 WASHINGTON -- Senators fashioning a pair of colossal bills that would deliver more than $4 trillion for infrastructure, health care, environment and other initiatives insist they will fully pay for both plans.

Both parties have long relied on misleading budget tactics to help finance their priorities. They let lawmakers claim they are being fiscally responsible while inflicting little pain on voters and contributors with tax increases or spending cuts.

For political and procedural reasons, Congress' Democratic leaders are slicing President Joe Biden's domestic spending agenda into two bills. One is a bipartisan effort providing about $1 trillion for roads, broadband and other public-works projects.

Lawmakers and aides are expected to work through the weekend, sorting through the flurry of tensions over funds for water resources, public transit and other details in what they hope are the final stages of their work.

The other bill would aim $3.5 trillion at expanding Medicare coverage, slowing climate change and providing free prekindergarten and community college. This expansive package, which also would fund tax credits for children and health care and help immigrants become citizens, is a Democrats-only push expected to take months and draw unanimous Republican opposition.

With Washington already projected to spend $63 trillion over the coming decade, an additional $4 trillion would be just a 6% boost. Even so, finding $4 trillion in tax increases or spending cuts to pay its costs would be prohibitively painful for politicians.

To pay for much of the $3.5 trillion package, Democrats led by Senate Finance Committee Chairman Ron Wyden, D-Ore., want to increase taxes on the wealthy, big corporations and companies earning income abroad.

Raising more would be tough. Lawmakers are boxed in between Biden's pledge not to raise taxes on people earning less than $400,000 annually and GOP opposition to unraveling former President Donald Trump's big 2017 tax cut. "It's the perfect storm for not doing anything real on the revenue side," said William Hoagland, a former top Republican Senate aide.

Democrats also want to beef up the IRS budget so it can collect more unpaid taxes and, perhaps, claim the bills themselves would generate more government revenue by stimulating economic activity.

No one doubts that a more muscular IRS would pry more taxes out of scofflaws. Bolstering programs that help people stay healthy, get educated and move goods more efficiently undoubtedly help the economy hum.

The question, though, is exactly how much federal revenue those two ideas would yield. Government agencies and outside analysts have widely divergent views, especially for forecasting legislation's impact on economic growth.

Lawmakers eager to claim they have fully financed their proposals could gravitate to the highest plausible numbers they can find, to critics' chagrin.

"In basketball, you don't get to choose your own ref," said Marc Goldwein, senior policy director at the nonpartisan Committee for a Responsible Federal Budget.

The Congressional Budget Office, lawmakers' nonpartisan accountant, estimated last year that Congress could collect $61 billion more in taxes over the next decade by giving the IRS an additional $20 billion.

Others are more generous, which could help Democrats eager to finance their $3.5 trillion proposal.

That concept is called dynamic scoring, and Republicans have long embraced it to paint their tax cuts as cost-free. That's not happened.

"The tax cuts will pay for themselves," Steven Mnuchin, Trump's treasury secretary, said repeatedly about the 2017 tax law. Instead, the Congressional Budget Office estimated that even including increased economic activity, that measure will drive up federal deficits by $1.9 trillion over a decade.

Democrats have long mocked dynamic scoring as a Republican ruse for claiming savings that may never materialize to hide the true cost of their tax-cutting agenda. Among its most virulent critics has been Senate Budget Committee Chairman Bernie Sanders, I-Vt., who in 2015 called it "voodoo economics." Sanders' office declined comment for this article.

Yet Democrats argue that if tax cuts can spawn economic growth, so can fortifying productive programs such as education and transportation. That's legitimate if you don't put "so much spin on the ball that you're basically closing a budget gap with magical thinking," said Sen. Brian Schatz, D-Hawaii.

Citing past GOP support for dynamic scoring, Sen. Roy Blunt, R-Mo., said, "Maybe on this topic I would just say, 'Welcome to the team.'"

The Congressional Budget Office has provided some dynamic scoring estimates but cautioned that the projections are uncertain.

Both bills' negotiators are ready to claim savings by assuming Biden will repeal Trump administration regulations on drug rebates. The Congressional Budget Office projected those rules would cost the government $177 billion over a decade, so blocking them would reduce expected spending.

But Trump's rule has never been implemented. With Washington running record-setting budget deficits annually, claiming savings by repealing the rule and using that money to finance spending bills would be like a deeply indebted family canceling a $50,000 vacation and using those "savings" to buy something else.

Senate Democrats say some proposed tax credits and spending in their $3.5 trillion bill may last less than the measure's full 10 years. That would constrain the legislation's price tag.

Both parties have a history of putting early expiration dates on programs that, like some of these, are so popular that a future Congress likely will renew them. Republicans did that with much of President George W. Bush's 2001 tax cut, which was mostly extended.

The Committee for a Responsible Federal Budget says the full 10-year cost of the policies in Democrats' $3.5 trillion plan is $5 trillion.

Other questionable proposals include selling oil from the government's Strategic Petroleum Reserve, which inevitably gets refilled, sometimes at higher cost, and taking credit for proceeds from the federal auction of 5G spectrum airwaves, which is happening anyway.

The groups representing the long-term care facilities said tapping virus relief dollars would be "short-sighted, especially as covid-19 variants continue to spread." They noted the delta variant that now accounts for most of the new cases and threatens "the safety of our nation's seniors and their caregivers."

Among other funding plans, negotiators have looked at redirecting billions of unspent dollars from last year's covid relief and tapping other potential funding streams.

Even if the negotiators strike an agreement, it's not at all clear the funding sources will pass muster with the Congressional Budget Office. If the final accounting shows the package is not fully paid for, some lawmakers may balk and use that as another reason to vote against it.

"Folks will always find a problem with our pay-fors," Sen. Bill Cassidy, R-La., said on Bloomberg Television. "On the other hand, we will have it paid for and we will be able to not just pay for it, but point towards long-term gains the society, the economy will benefit from, according to multiple economists from across the political spectrum."

Groups representing nursing homes and other long-term care facilities called on the negotiators Friday not to redirect money from a fund established to reimburse health care providers for expenses and lost revenue during the pandemic.

The Department of Health and Human Services said Friday that there is about $24 billion not yet allocated to providers, out of about $178 billion Congress approved for the fund through various relief measures.

The groups said some of their members have not been able to get reimbursement for expenses and lost revenue incurred in the latter months of 2020 and this year and were anxiously awaiting another round of funding from the Health and Human Services Department.

A Democratic aide granted anonymity to discuss the negotiations confirmed that how to redirect certain relief dollars is still among the issues that have not yet been resolved. Another is the amount of money that would be dedicated to public transit. There also are disputes over broadband funds and labor laws, the aide said.

"We will not support any package that neglects this fundamental part of our nation's infrastructure," the two senators said.

Republican Sen. Mitt Romney of Utah said that 20% of funding from the Highway Trust Fund traditionally goes to transit versus 80% for roads and bridges, and there is concern from Republicans that the bipartisan framework changes that ratio to the advantage of transit.

Sen. Tammy Duckworth, D-Ill., also has voiced concerns about the water and wastewater segments of the bill. She warned that she can't commit to supporting a final bill if didn't fully fund a $35.9 billion water bill that she sponsored and which passed the Senate by a vote of 89-2.

Carper said senators were assured that the legislation would be fully funded, but "now we're hearing it may be moved around." He said that $15 billion may be specifically allocated for lead-pipe removal, rather than giving the states and local governments the flexibility to use that money as they deem most appropriate, which could include lead-pipe removal.

The final package would need the support of 60 senators in the evenly split 50-50 Senate to advance past a filibuster. Last week's test vote failed along party lines.

The package would next go to the House, where some Democrats are fearful that their priorities have been overlooked during the Senate negotiations and are warning that their votes should not be taken for granted.

Information for this article was contributed by Kevin Freking and Lisa Mascaro of The Associated Press.