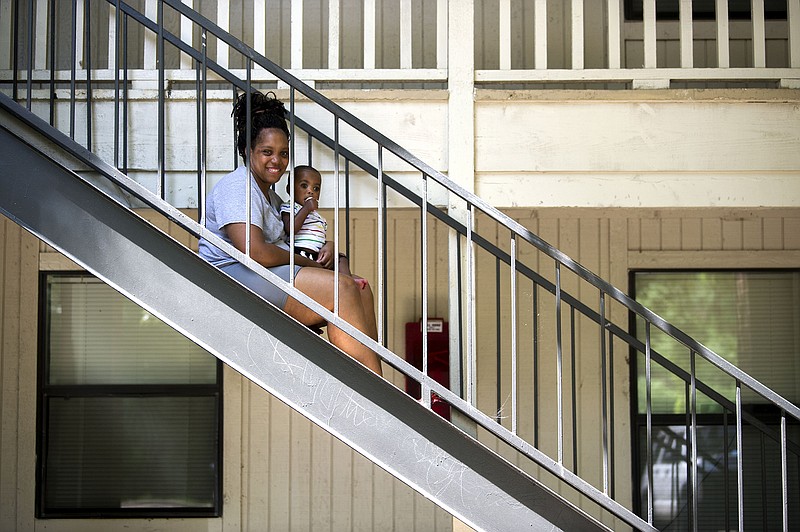 Sahmone Robinson sits with her 1-year-old son, Riley, at their apartment Saturday in Benton. Robinson said she’s struggled to pay her rent during the pandemic and hasn’t had cooperation from the property management company that owns the building in her attempts to obtain emergency renter assistance. Now she’s concerned she”ll be evicted next month. (Arkansas Democrat-Gazette/Stephen Swofford)

Erica McPherson of North Little Rock fears she will end up in a homeless shelter with her three children in the coming weeks.

Rent and gas bills piled up, and health problems prevented McPherson from working until recently, she said. She applied for rental assistance from Pulaski County on June 1, but as of Monday, the county was still processing applications from the end of May.

The federal Consolidated Appropriations Act of 2021 allocated $173 million for emergency rental assistance to Arkansas, but that money has been slow to find tenants in need.

The state's money has trickled out even slower. As of late last week, the Arkansas Department of Human Services had distributed only about $2.27 million of its $173 million from the federal government designated for emergency rental assistance.

That means that ahead of the end of a federal ban on evictions July 31, many eligible Arkansans are behind on rent.

McPherson is one of those possibly facing eviction. If that happens before the county approves her application, she and her children will have nowhere to go, she said.

"I don't ask for a lot, [but] it's summertime, and I owe $1,500 for two months' rent," McPherson said. "Electricity has run out in certain areas of my house. I don't want to remind [the landlord] I haven't paid rent by asking him to do repairs that cost money."

The state's slow rollout has put the entire program at risk. If 65% of funds aren't spent by the end of September, Arkansas may have to return the money, said Mary Franklin, director of the Division of County Operations under the Arkansas Department of Human Services. Franklin's division oversees the rental assistance program.

The U.S. Treasury Department hasn't reached a final decision on whether it will reallocate the unspent funds if the 65% threshold isn't met, Franklin said.

"If the need is out there, we certainly want to be able to serve it," she said. "We're just going to need to see what happens in September and what Treasury's final decision is."

Arkansas is among seven states that, as of the end of June, had distributed less than 1% of federal rental relief funds. Nationally, assistance has been slow to get to renters, said Diane Yentel, president and chief executive officer of the National Low Income Housing Coalition. The Washington, D.C.-based organization advocates for and researches policy that "ensures people with the lowest incomes in the United States have affordable and decent homes," according to its website.

"We are looking at the very real possibility of a historic wave of evictions and housing instability this summer and fall," Yentel said. "It's especially so frustrating when there are abundant resources available to reach those tenants, and they're just not getting out."

• In Pulaski County by visiting https://pulaskicounty.net/covid-19-emergency-rental-assistance-program/.

• In Benton County by visiting https://harknwa.com/get-connected/.

People who earn up to 80% of their area median incomes and have experienced financial repercussions from covid-19 are eligible for rental and utility assistance under Arkansas' program. They must also be facing the risk of homelessness if evicted.

Landlords must agree not to evict for nonpayment of rent for the months covered, Franklin said in a previous interview.

The state program covers up to 12 months of back rent and utilities incurred since April 1, 2020. The program can also cover up to three months of future bills.

Benton, Pulaski and Washington counties have their own programs through the federal act. Benton County alone had provided assistance to 936 households as of Friday, 92 more than the Human Services Department, which has helped 844 households through the program.

Pulaski County had scheduled payments to about 455 households as of late last week, Love said.

Springdale had spent about $752,000 of its $1.5 million, said Mary James, the housing authority's executive director. No applications should be denied through the program, she said, and once someone is approved for assistance, they can reapply but they won't be prioritized.

The Fayetteville Housing Authority also received about $1.5 million and has spent 96% of its funds. It closed applications and expects to send out final checks in the next few days, said Victoria Dempsey, interim deputy director and director of vouchers and supportive services at the agency.

While the three individual counties have disbursed a greater share of assistance, the lack of assistance getting to people around the state is particularly concerning with just a few days before a federal moratorium on evictions scheduled to end July 31, experts said.

In September 2020, the U.S. Centers for Disease Control and Prevention initiated a ban on most evictions for nonpayment of rent for tenants who meet a few qualifying conditions and give their landlords signed forms declaring that they qualify.

The order, which is facing legal challenges, has been extended several times since September. The CDC has said the most recent extension was the last one.

"Basically my understanding and thought is that come August we're going to see a lot of evictions," Dempsey said. "I think our communities' population of those experiencing homelessness will increase."

Jason Auer, an attorney and housing work group leader, with Legal Aid of Arkansas, said many cases he's had for months are beginning to have hearings scheduled for the first weeks of August.

At the end of June, only about $3 billion of $46.5 billion in allocated rental assistance had been spent nationwide, Yentel said.

"There are many states and cities who are spending money abysmally and unacceptably slowly," she added.

The problem began as the program first rolled out when former President Donald Trump's administration published what Yentel calls "bad guidelines" regarding how the money was to be spent. President Joe Biden's administration spent weeks issuing new guidance, and many states and localities were unwilling to start their programs when they knew the guidance would be changing, she said.

In Arkansas, many tenants need to be contacted more than once to obtain all of the necessary documentation, Franklin said.

Franklin and county-level program administrators advised that tenants applying for help gather as much documentation as possible and communicate with landlords from the start.

In Pulaski County, tenants have 10 business days to supply documentation if they don't provide it upfront, Love said. If they don't get it in, they have to reapply.

"We just give people 10 business days because, if not, we won't be able to serve other people," Love said.

The programs that have best been able to get money to tenants have "simple and accessible applications" and allow tenants to self-attest that they meet requirements, Yentel said.

In Fayetteville, which has spent nearly all of its money, staff members work with tenants to obtain documentation and allow self-attestation when tenants can't produce all of the documents.

'AS EASY AS POSSIBLE'

Some Arkansas programs have made adjustments to speed the process along and educate more tenants about available assistance.

The vendor managing the state's program is adding more people to process applications, Franklin said. The state has 904 active applications, meaning applications that have been matched with the tenant and landlord portions.

The state is beginning the paid portion of its outreach plan with promoted posts on social media, said Gavin Lesnick, a Human Services Department spokesman.

Most Arkansas programs offer applications in multiple languages -- English, Spanish and Marshallese. In Washington and Benton counties, administrators have provided information to and partnered with community organizations to help get the word out.

In Benton County, the foundation has started issuing checks electronically to landlords whenever possible and reaching out to utility companies with the list of people who have been approved to prevent shut-offs, Upchurch said.

"Obviously the money has not gone out as fast as they expected," Upchurch said. "They tried to make things as easy as possible to speed up the process with the moratorium ending on July 31."

It's also not unusual to find that landlords don't want to participate, Love said.

"That's one of the more troubling things that we have found," he said.

Most programs except the one in Fayetteville require landlord buy-in. In Fayetteville, the housing authority makes several efforts to contact landlords, but if they don't respond, the money goes directly to the tenant, Dempsey said.

In some cases, landlords are unwilling to accept federal dollars. In others, they've decided they want the tenants out for various reasons, Yentel said.

Some large property management companies may be operating in several states and don't want to navigate multiple programs, she added.

Lindsey Management, based in Fayetteville, manages more than 160 apartment complexes in five states, according to its website. Sahmone Robinson of Benton lives in a building managed by Lindsey, and she sent an application for rental assistance to the state Department of Human Services in May.

When she asked her landlord to send a corresponding application so hers would be considered, her landlord referred her to "corporate," meaning Lindsey headquarters, she said.

"​​Every time I talked to my landlord, she was kind of nasty," Robinson said. "I asked if I could make payments [on my back rent], since I've started working, and she said, 'No you have to call corporate,' and corporate said they couldn't do it. It's a bunch of mess."

Anne Mourney, general counsel and vice president for Lindsey Management, said in an email that each individual property could decide whether to participate in rental assistance programs.

The apartment complex in question "has been unable to agree to the terms and conditions of the landlord application" required by the Department of Human Services, Mourney said.

"The apartment community's representatives are working with the Arkansas Department of Human Services in an effort to reach an agreement on the terms and conditions," she said.

Robinson said she is concerned that she will be evicted in August.

The federal moratorium has not prevented all evictions, said Neil Sealy, an organizer with Arkansas Renters United.

"There will be a lot of evictions after July 31, but there are a lot now," Sealy said. "Not all judges honored the CDC moratorium, sheriff's offices certainly don't, and a lot of landlords don't."