WASHINGTON, D.C. -- At the tag end of a hot Monday afternoon, we entered the Smithsonian Institution's Freer Gallery, which focuses on Asian art. With only 30 minutes until closing time, I halfway expected they might refuse us entry on the grounds that we wouldn't have time to do the collection justice.

Which would have been a fair point; we knew we were rushing through, ticking boxes. Beautiful jade. Buddhas. Bodhisattvas. Menacing stone figures that stood guard. Fine.

Then something stopped us. Charles Lang Freer, the industrialist who in 1906 became the first American to donate his art collection to the Smithsonian (Freer also built the Gallery to hold it and provided its initial endowment) was not exclusively interested in Asian art. He was also a patron of James McNeill Whistler, the famous mother brusher.

Whistler was influenced by Asian art, as evidenced by his 1865 painting "Rose and Silver: The Princess from the Land of Porcelain," which hangs above the fireplace in Whistler and Thomas Jeckyll's "Harmony in Blue and Gold: The Peacock Room" a space that was relocated to the Freer Gallery from Freer's Detroit mansion after the magnate's death.

It wasn't actually a collaboration between Whistler and Jeckyll; Jeckyll was commissioned by British shipping magnate Frederick Richards Leyland to make over the dining room of his Kensington townhouse. Whistler, from whom Leyland had commissioned several paintings, was working elsewhere in the house. When Jeckyll fell ill, Whistler volunteered to take over the dining room project.

And what he did with the space varied significantly from Jeckyll's vision or Leyland's wishes.

"Well, you know, I just painted on," Whistler wrote. "I went on―without design or sketch―it grew as I painted. And toward the end I reached such a point of perfection--putting in every touch with such freedom―that when I came round to the corner where I started, why, I had to paint part of it over again, as the difference would have been too marked. And the harmony in blue and gold developing, you know, I forgot everything in my joy in it."

It is said that when Jeckyll finally saw "his" room he had an emotional breakdown. He went back to his studio, stripped off his clothes and covered himself in gold leaf. He died in an asylum three years later.

Leyland's reaction was severe. He threatened to withhold Whistler's check. He dismissed the artist from his renovation project.

"Ah, I have made you famous," Whistler reportedly told Leyland. "My work will live when you are forgotten. Still, per chance, in the dim ages to come you will be remembered as the proprietor of the Peacock Room."

And then, when Leyland left for his house in Liverpool, Whistler stole back into the Peacock Room and painted two fighting peacocks, meant to represent himself and Leyland. He titled the work "Art and Money; or, The Story of the Room."

Not surprisingly, Whistler went broke a short time later. Leyland was one of his chief creditors. When the creditors arrived at Whistler's house in Chelsea to inventory the artist's belongings, they were greeted by a painted caricature of Leyland portrayed as a grotesque half-peacock sitting atop Whistler's house and playing a piano. It was titled "The Gold Scab: Eruption in Frilthy Lucre (The Creditor)." ("Frilthy" was a punning jab at Leyland's fondness for frilly dress shirts.)

Best (or worst) of all, it was mounted in a frame Leyland had selected for a painting he had commissioned from Whistler 10 years before that had never been (and would never be) completed.

But it was not The Peacock Room that stopped us.

It was a few smaller works in a back room, collected under the cheeky rubric "Dirty Pictures." Here are a few of Whistler's "nocturnes" (he got the idea for calling them that from Leyland, an accomplished amateur musician who especially admired Chopin) from around the same period. Whistler used the musical term because he wanted to subvert the English habit of "reading" a painting like a book, i.e., taking the presented image as a literal perception/depiction of the world.

As Whistler turned away from realism at the end of the 1860s, he began to paint industrial London cityscapes by night, going out on a boat on the Thames and committing the scenes to memory. He returned to his studio to paint them with paint so thin it was translucent, and limited the colors he used, concentrating on tonal qualities. They are simple compositions, lurking murky shapes touched here and there by points of light.

Claude Monet saw these paintings when he visited Whistler, and their influence is very much evident in the fog-filtered paintings he made of London in the 1890s. (It should be noted both Whistler and Monet were indebted to original "painter of light" William Turner.)

They weren't well received by critics and the public at the time, and when eminent art critic John Ruskin compared Whistler's "Nocturne in Black and Gold, the Falling Rocket"--a violently gorgeous work currently residing in the Detroit Institute of Arts that shows fireworks exploding over the Thames with raining sparks rendered as specks of gold--to "a pot of paint [flung] in the public's face," the artist sued him for libel, fomenting a circus of which Henry James wrote:

"The crudity and levity of the whole affair were decidedly painful, and few things ... have lately done more to vulgarize the public sense of the character of artistic production."

It was probably a desperation move on Whistler's part. He had always lived above his means and, in many ways, typified the stereotype of the artist as a privileged, self-promoting boor. Nothing was as important to Whistler as building his own brand--he would have fit right in with the Andy Warhols, Jeff Koonses and Damien Hirsts who followed him. The trial afforded him not only an opportunity to hold forth publicly on his theories of art, but gave him a chance of winning a settlement.

He eventually did, though the court awarded him a mere farthing instead of the 1,000 pounds he asked for. And they made him split court costs with Ruskin, already slipping mentally, who was essentially ruined by the trial.

My opinion of Whistler has always been that he was a talented clown and a bad person, whose paintings I could take or leave. I might have even called his work boring.

But then, on a Monday afternoon, in an air-conditioned room down the street from the Capitol, I saw a few of Whistler's dirty pictures. And they got me. 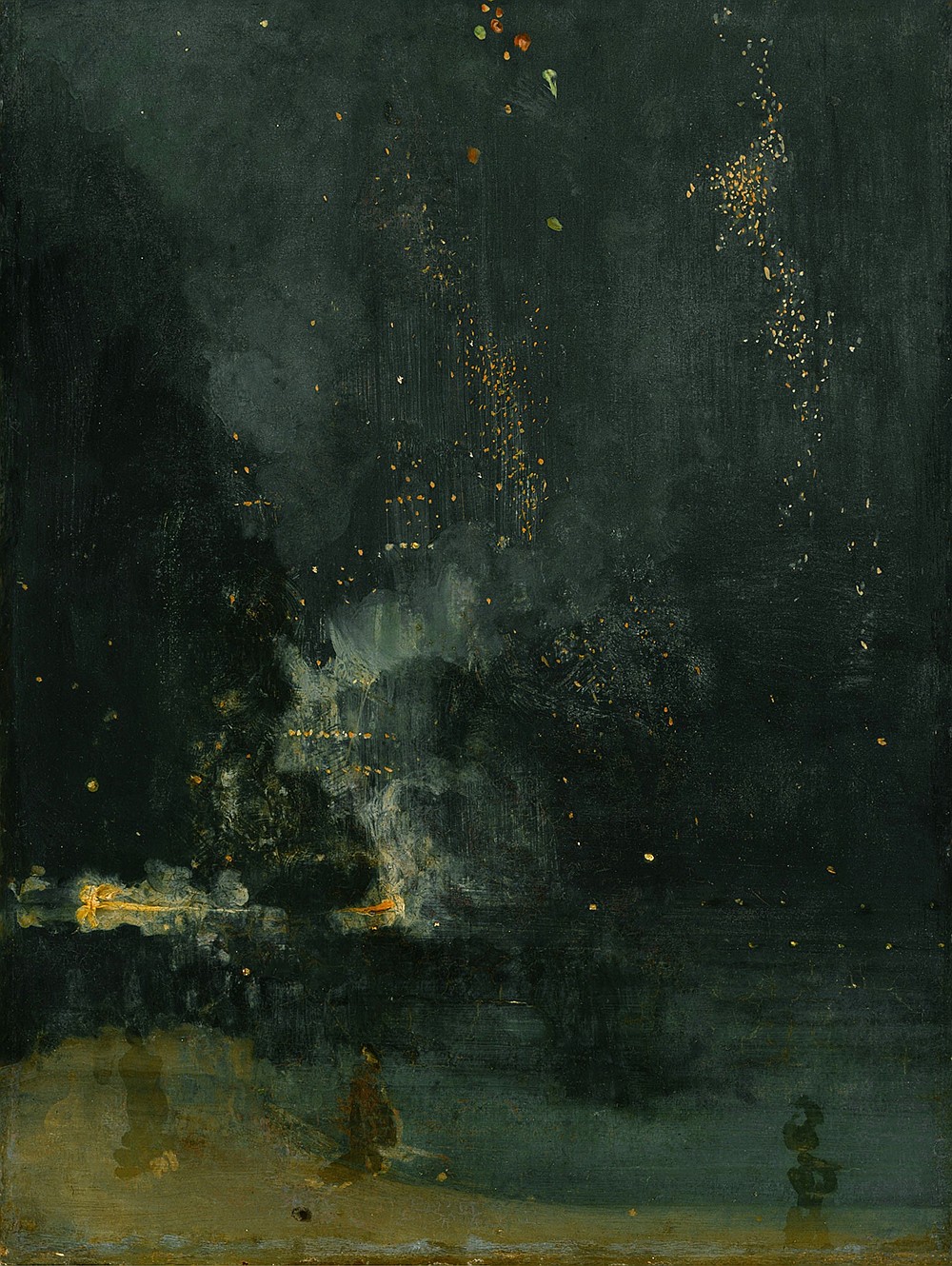