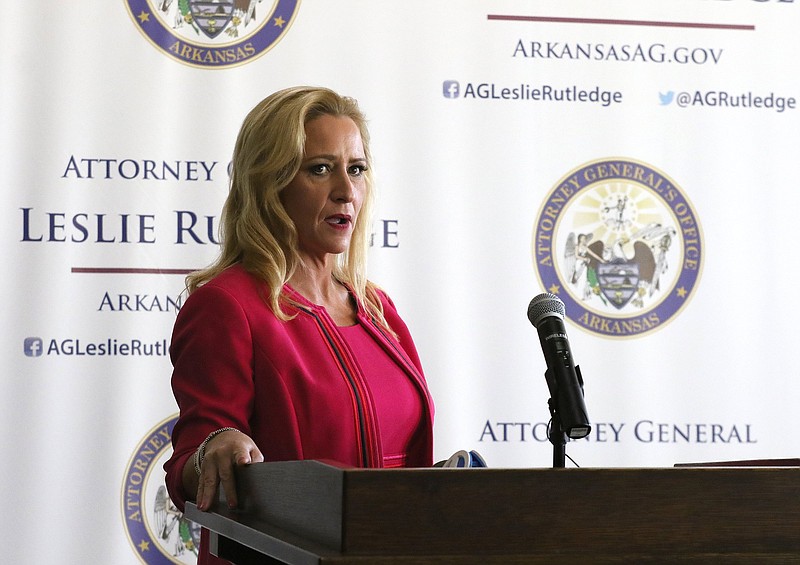 Republican gubernatorial candidate Leslie Rutledge said she plans to try to get a proposed constitutional amendment that would eliminate the state's individual income tax on the 2022 general election ballot.

Rutledge, the state's attorney general, announced Thursday in a campaign video that she wants to make Arkansas first in job creation and economic development and compete with Texas, Tennessee and Florida -- states that don't have income taxes.

Rutledge said she will launch a grassroots effort to get this proposed constitutional amendment on the ballot because she believes that the people of Arkansas -- not the politicians -- are the best ones to make this decision.

"It will not be easy, but we will get it done," she said.

Every hardworking Arkansan and small business would be among those getting a tax break under her proposed amendment, Rutledge said.

Rutledge's campaign manager, Drew Evans, on Friday declined to reveal when Rutledge will file a proposed ballot title and popular name for the amendment with the secretary of state's office.

On May 17, Rutledge, of Maumelle, announced that she signed the "Taxpayer Protection Pledge" by the nonprofit group Americans for Tax Reform. At that time, Rutledge said she would release a plan this summer for eliminating the income tax.

That came three days after Republican gubernatorial candidate Sarah Huckabee Sanders of Little Rock tweeted her support for eventually getting rid of the state's income tax. Sanders is a former press secretary for then-President Donald Trump and the daughter of former Republican Gov. Mike Huckabee.

"Attorney General Rutledge will continue to roll out more details of this initiative as well as other policy issues throughout the campaign," he said.

Sanders hasn't laid out details of how she would phase out the state income tax either.

"This plan is incomplete, especially at a time when so many Arkansans are struggling and working families need their government to fight for them," he said in a written statement. "Our infrastructure is crumbling and our schools are underfunded. Salaries for state employees and public school teachers lag behind neighboring states. What's the plan to pay for those things without an income tax?

"We need a more comprehensive conversation on taxes," said Jones of Little Rock.

Democratic gubernatorial candidate Supha Xayprasith-Mays of Little Rock has said she wants to phase out individual income taxes only for Arkansans making under $500,000 annually.

Democratic gubernatorial candidate James Russell III of Little Rock has said Rutledge's and Sanders' proposals would have a negative outcome for the state and he would like to see more corporate tax accountability.

A spokesman for Democratic gubernatorial candidate Anthony Bland of Little Rock could not be reached for comment this weekend.

The party primary elections in the governor's race are in May 2022. The general election is in November 2022. The term for the next governor would begin in January 2023 and last four years. Governors are limited to being elected to two four-year terms.

During this year's regular session, state Sen. Trent Garner, R-El Dorado, introduced Senate Bill 522, which would have cut all individual income tax rates to zero, effective Jan. 1, 2022. Garner presented the bill to the Senate Revenue and Taxation Committee, but he didn't ask the committee to vote on it. He plans to pursue an interim study of the proposal.

SB522 would have led to a $3 billion reduction in state general revenue in fiscal 2023 based on net tax amounts reported on 2019 returns, according to a financial impact statement from the state Department of Finance and Administration.

The general-revenue budget that Republican Gov. Asa Hutchinson has proposed for fiscal 2023 is $6.01 billion with an additional $54.9 million to transfer to the state's Long-Term Reserve fund, according to department spokesman Scott Hardin. Fiscal 2023 begins July 1, 2022. Most of the general revenue budget goes to help fund the public schools, human service programs, colleges and universities and public safety programs.

In November, then-Republican gubernatorial candidate Lt. Gov. Tim Griffin of Little Rock said he wanted to phase out the state's individual income tax, though it could take 10 years or possibly more.

At that time, Sen. Jim Hendren, an independent from Sulphur Springs, said it could take more than three decades to phase out the state income tax. Hendren, whose uncle is Hutchinson, served as a co-chairman of the Legislature's tax-overhaul task force in 2017 and 2018.

In February, Griffin departed the governor's race to run for attorney general instead in 2022.

Hutchinson wants to further trim the state's top individual income tax rate in a special session planned for this fall at a yet to be determined time. He has served as governor since 2015 and is barred from seeking reelection in 2022 under the state's term-limits amendment.

"Any involvement in this issue by the Attorney General or staff will be in compliance with the law and the Ethics Commission rules," he said.

Act 376 of 2019 shifted the responsibility for certifying the ballot title and popular name of proposed ballot measures from the attorney general's office to the Arkansas Board of Election Commissioners, which considers certifying these items after the petition signatures are delivered to the secretary of state's office. Before the enactment of this law, the attorney general's approval was required prior to petitions being circulated.