Cherokees to give to bridge funding 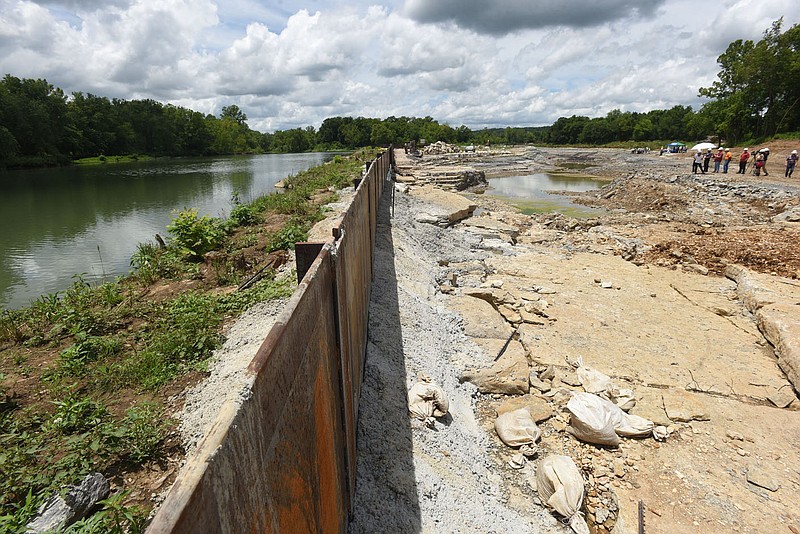 The main channel of the Illinois River is seen Tuesday June 29 2021 on the left of a steel barrier while the channel that will be the whitewater park is at right. Go to nwaonline.com/210629Daily/to see more photos. (NWA Democrat-Gazette/Flip Putthoff

WATTS, Okla. -- A low-water concrete crossing on the road to the under-construction WOKA Whitewater Park will be replaced, an official said.

The water park on the Illinois River falls in Wood's district and also is within the Cherokee Nation's boundary.

Railroad tracks are the first obstacle on Twin Falls Road, also known as East 610 Road, off U.S. 59, south of Siloam Springs. Then comes a dip and the low-water crossing on the gravel road that leads to the water park.

The crossing -- less than a half-mile from the water park -- will be replaced by two, 38-foot-long, 8-foot-wide railroad tanker cars that have been cut in half, Wood said. The upgrade will allow for two vehicles to cross at the same time with a bicycle path on one side, Wood said. The tanker cars have been delivered to the site, Wood said.

Two steel plates were put over the concrete crossing, said Derek Salmonson, project manager for Crossland Construction, which is building the park. Salmonson noted the heavy construction truck traffic that happens on the road. Crossland also has used some of the 60,000 cubic yards of rock blasted out at the site to put down on the road, he said.

Roadwork started last week, Quetone said. The road will be built up in one area and 6 inches of base rock will be put down, Quetone said.

Other improvements will include taking away some of a hillside to straighten a tight, blind curve, Wood said. There are people who live east of the water park and use the road.

Officials with the Grand River Dam Authority in Oklahoma and Siloam Springs announced plans for the park last fall.

The dam authority will oversee and manage the park, which is near the old spillway of Lake Frances. The lake was essentially depleted in 1990 when its dam was severely damaged, according to a 2017 report in the Siloam Springs Herald-Leader.

The Walton Family Foundation is paying 95% of the park's $33 million construction cost, according to the fact sheet. The foundation also provided funding for the park's design.

The park's main attraction will be an approximately 1,200-foot-long, 100-foot-wide side channel off the river with eight drop-features to provide wave action for kayakers, surfers and tubers of all skill levels, the fact sheet states.

Print Headline: Cherokees to give to bridge funding