OPINION | GAME ON: In ‘Dream Engines’ you can build an industrious city, but don’t linger 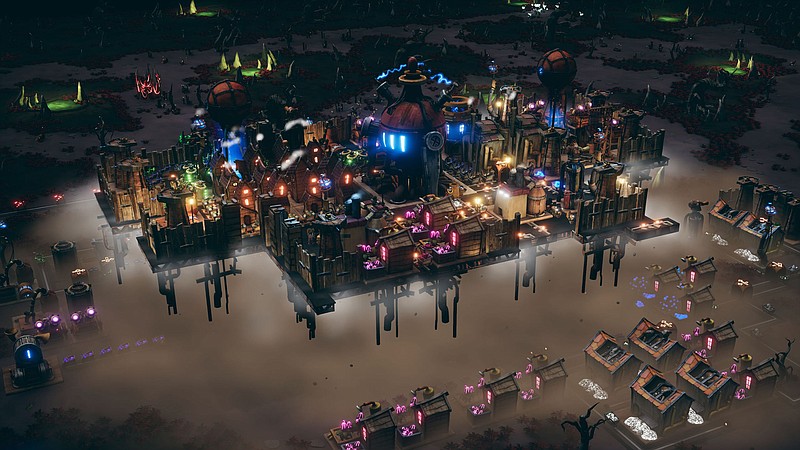 "Dream Engines: Nomad Cities" is the latest take on the city-building factory game genre. It's a visual treat, with a steampunk, Tim Burton-esque art style.

Players control a yellow chonk of a robot named Tiny to build, automate and defend a flying city trying to survive in a nightmarish, post-apocalyptic world.

Tiny is armed with melee and ranged attacks, and can build new buildings to gather resources from around the map. Harvested wood must be transported via automated rail to be refined into lumber, houses must be built to increase population, farms planted to provide food, and so on. A rail system, a staple in automated factory-style games such as "Factorio," delivers wood to the lumbermill, food to homes and other raw resources to refineries.

As the city grows, gathers and refines, it is attacked regularly by alien-like swarms of creatures that Tiny must fight off, using turrets, walls and his own weapons. Over time, that swarm becomes stronger, making each blitz on the city harder to repel.

The game's unique mechanic is that the "core" of the city is mobile. If the attackers start to be overwhelming, or area resources dry up, you'll want to move on to greener pastures. Anything not built inside the core of the city will be left behind, so players must balance what's important to keep against the cost of building new facilities.

Tiny can build anywhere on the map, but the city's core has a limited footprint, and the city can only support a certain weight. You won't be able to build everything inside the city proper. Additionally, only refined resources can be transported to a new location, so all raw resources will be left behind. Not all regions have the same resources available, so your nomadic city must repeatedly fly to new locales.

There is also an extensive research tree that makes new buildings and abilities available, or improves the efficiency of existing technologies.

"Dream Engines" is an interesting take on the combination factory/city builder genre. I especially like how a press of the space bar switches Tiny between a top-down, city-builder mode and an isometric, Diablo-like perspective for combat, complete with context-specific hot bars.

Combat can be frenetic, with enemy swarms often destroying large amounts of the city, which Tiny can repair and rebuild. If Tiny dies, he is rebuilt at the city core, although some resources are used up, and the pace of enemy attacks increases. If the city's core, the Dream Engine, is destroyed, it's game over.

The key to survival in "Dream Engines" is to use available space and resources efficiently. Buildings require workers, which require houses and a constant food supply, all of which must be built using resources such as stone and wood, which requires buildings, which requires more power generation, which requires certain limited resources, and so it goes. And in the midst of what on its own is a fairly complicated city-builder with entwined, automated systems that require clever planning, it's simultaneously a tower defense game as Tiny and strategically placed turrets attempt to repel invaders, which attack at regular intervals.

Once an area has been drained of resources or the attacks get too strong, it's time to move on. The city will lift off from the ground, using its limited fuel, and players will choose from six new possible locations. The environment may change (for example, being in a "Blightlands" or a desert), and the available raw resources and level of enemy activity can vary too. There are also modifiers to worry about, such as decreased food production in deserts.

Once the city lands at its new spot, Tiny must quickly clear out the surrounding areas of enemies, find raw resource spots and rebuild the necessary infrastructure to get the city back into shape. But Tiny has to be fast, because it's only a few minutes before swarms start raiding the city again.

During the repeated cycles of land, build and liftoff, your city progresses on its research, the city's footprint can be expanded, and the permanent buildings can be upgraded.

If you feel like the game is becoming too easy at any point, the difficulty can be increased when you select new locations to land, and achieving certain milestones will unlock new "tribes" to play as that will alter some of the core mechanics.

"Dream Engines: Nomad Cities" came out in early access in mid-July, which means that there's still some tweaking that will go on, hopefully with a sometimes-clunky user interface (such as needing to use the bracket keys to rotate buildings). If roguelike factory-game survival city-builders are your jam, though, this is a title to check out.

A review copy of "Dream Engines: Nomad Cities" was provided for this review.

Rating: Appropriate for anyone