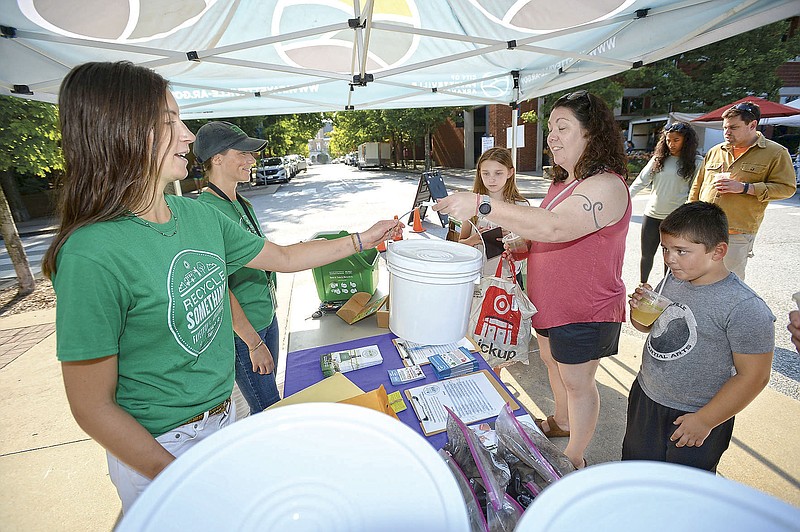 Taylor Gladwin (from left) and Heather Ellzey, both environmental educators for the city of Fayetteville, hand a food waste collection bucket and information Saturday, July 24, 2021, to Liz Greene of Fayetteville and her children Abram Greene, 6, and Amelia Greene, 11, at the Fayetteville Farmers’ Market. The city is encouraging residents to drop off food waste to turn into compost. Residents can drop off food waste among five locations in the city or at the mobile trailer at the Farmers Market every second and fourth Saturday. Visit nwaonline.com/210725Daily/ for today's photo gallery. (NWA Democrat-Gazette/Andy Shupe)

FAYETTEVILLE -- The city of Fayetteville is adding more drop-off locations for food waste in hopes more residents will participate in the program.

Greater participation could set the stage for residential curbside pickup of the scraps for compost.

The recycling plan the City Council adopted in 2017 outlines ways to divert 40% of the city's waste from the landfill by 2027. The diversion rate has hovered around 20% the past 15 years.

The plan recommends eventually having residential curbside pickup of food scraps along with the other recyclable items already picked up. The plan is to start off slow, Pugh said.

If enough residents volunteer to drop off food waste and learn how to do it correctly, without contaminating the organic material, the practice may become more common over the next few years, he said.

A study used to devise the recycling plan found 66% of the city's residential waste could be diverted. Recyclable paper and containers made up the largest portion at 27%, with food waste coming in second at 18% and other potential recyclable and compostable material each making up 10% of the total.

The city got a permit from the state in 2017 to process food waste compost.

The commercial food waste collection trucks had more than 50 participants before the covid-19 pandemic prompted closings across the state, Pugh said. Activity ticked back up as businesses opened their doors, and now the city is back to pushing its food waste program, he said.

The city used the money to buy a trailer to pick up food waste at events such as the Farmers Market and festivals. It also got buckets with lids to give to residents for free.

The grant also paid for a two-year educator position contracted through the Boston Mountain Solid Waste District to get the word out and help people understand how the program works.

Taylor Gladwin has been serving in the role. She said the city has given out about 200 buckets in the past couple of months with a few hundred more available.

It's important for people to understand why getting food waste out of the landfill is important, Gladwin said. Organic material in the landfill decomposes without oxygen and creates methane. Methane is a greenhouse gas trapping heat within Earth's atmosphere and contributes to climate change, she said.

"We're really hitting two points with the food waste composting: keeping it out of the landfill and methane emissions out of the atmosphere," Gladwin said. Returning it to the earth as compost brings food waste full circle, she said.

Residents can pick up buckets every second and fourth Saturday at the Farmers' Market at the downtown square, periodically at the Yacht Club lot or by calling the Recycling and Trash Division at 575-8398.

The buckets have sealed lids, which helps control the smell. Residents are asked to provide an email address so the city can ask about usage.

Fruit and vegetables, coffee grounds and filters, dairy, bread, eggs, egg shells and food-soiled paper all can be accepted. Processed foods such as pizza, crackers, cookies and cooked meats also are acceptable. Raw meat is not. Compostable containers also can be processed.

The city recommends dropping the scraps into the food waste containers weekly.

The Northwest Arkansas Council released a study last fall outlining ways to achieve a regional, circular economy when it comes to waste. The concept refers to the process of material being recycled and reused, as opposed to a linear economy in which material are used once and discarded.

Food waste is a perfect example of the concept, said Dan Holtmeyer, recycling program manager with the council.

"It can come from local food that is grown and sold and eaten here," he said. "Then the corn cobs and whatever waste is left from it can be composted and resold to farmers. So it's a perfect loop."

Holtmeyer said he was unaware of an organized, regional effort to get cities to adopt food waste programs.

The city collected 380 tons in the first six months of this year.

Thirty-four businesses and schools participate in the food waste program. Some were lost because of the pandemic, Pugh said.

The city applied for another federal grant to cover the cost of collection to bring more schools on board. The city also is seeking more businesses with a lot of food waste to join, he said. 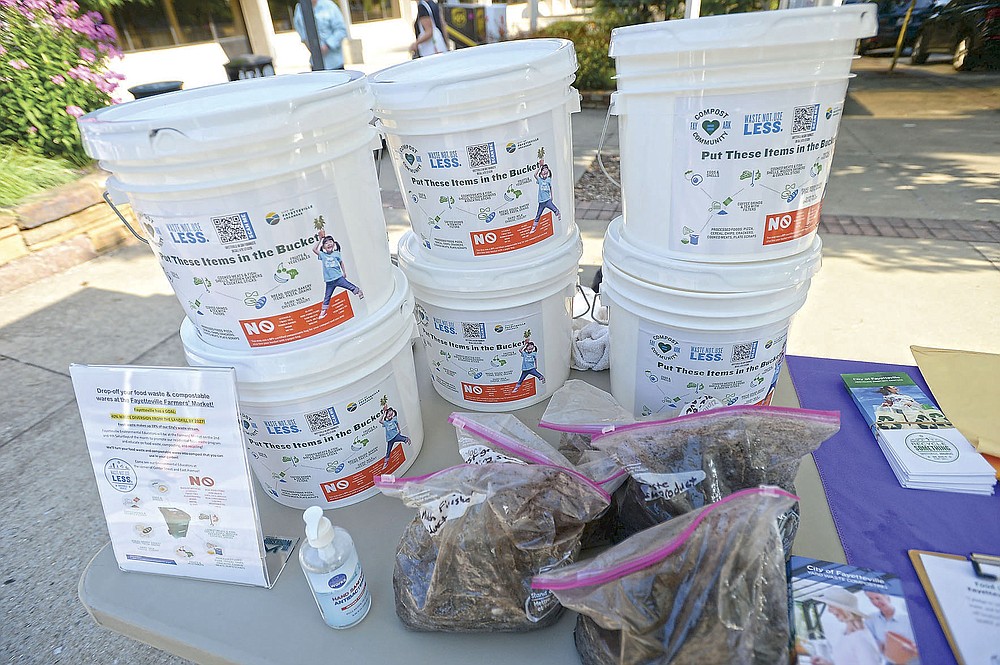 A stack of food waste collection buckets await distribution Saturday, July 24, 2021, at a tent set up by the city of Fayetteville at the Fayetteville Farmers’ Market. The city is encouraging residents to drop off food waste to turn into compost. Residents can drop off food waste among five locations in the city or at the mobile trailer at the Farmers Market every second and fourth Saturday. Visit nwaonline.com/210725Daily/ for today's photo gallery. (NWA Democrat-Gazette/Andy Shupe)