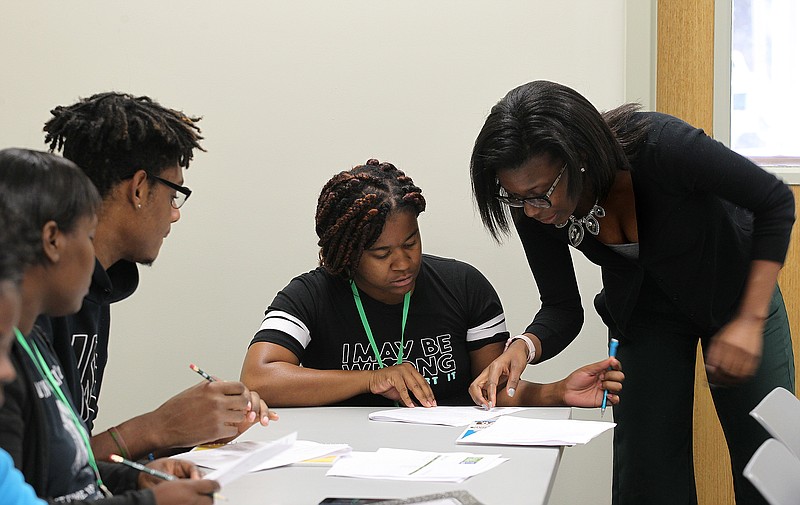 Arkansas Democrat-Gazette/THOMAS METTHE -- 10/16/2017-- Teacher Raveen Robinson (right) Maxine Ferguson with a problem during the math A class during the first day of classes on Monday, Oct. 16, 2017 at The Excel Center. The Excel Center at Goodwill is a free public high school that provide adults over the age of 19 a chance to earn a high school diploma. The eight week classes are offered year-round.

SPRINGDALE -- Goodwill Industries of Arkansas is looking at Northwest Arkansas as a location for the state's second adult high school, administrators say.

The Excel Center in Little Rock is the only adult high school in Arkansas, said Brian Marsh, Goodwill Industries of Arkansas president and CEO. It opened in 2017 to serve students 19 and older seeking a high school diploma, he said.

Springdale is at the top of the list for a new campus in Northwest Arkansas, he said, with other potential locations in Fort Smith and Jonesboro.

"Our mission is changing lives through education, training and employment," he said.

The state Board of Education approved an Excel Center expansion July 9. The Excel Center's plan includes raising the enrollment from the current 350 students to 1,050 students statewide for up to three new campuses, Marsh said.

Opening a location in Springdale depends on finding a building that meets the school's needs and funding, he said.

The Excel Center in Little Rock is one of 33 Goodwill Industries adult high schools in the nation, but it's the only campus that doesn't receive state money, Marsh said. Arkansas law prevents the state from funding the school.

The Excel Center is a public charter school that's tuition-free, has open enrollment and has the flexibility to meet the educational needs of individual students, according to state academic standards.

"It impacted my life beyond measure," said Melvin Williams, who earned his diploma in 2019 through the Little Rock center.

Williams, 35, lives in Jacksonville and said he sought out the center after losing his job as the general manager of a retail store, only to discover the lack of a high school diploma limited his employment options.

Williams said he dropped out of Little Rock Central High School when he injured his back and was unable to pursue his dreams of playing college football. He said he was in a wheelchair for a few weeks and experienced extreme pain. His grades began to slip, he said, and he dropped out of school just before turning 18.

Williams is now working as Goodwill Industries of Arkansas' recruitment and retention specialist and is pursuing a degree in business at the University of Arkansas-Pulaski Tech, he said.

The center in Little Rock is almost entirely paid for by the sales of donated items to Goodwill, Marsh said.

"Right now, our board has agreed to operate the school in Little Rock as it fits into our mission budget," but an additional location will require additional funding, Marsh said.

"What we're looking for is something along the lines of $7,000 a student," he said. "It works out to be about $2 million a year per school in operating costs."

Marsh said he hopes to work with the state to make money for adult charter schools feasible and will accept donations to open a new center.

The center could open as early as August if money and a building are secured, he said.

The Little Rock center is the only school within the Excel Center national network with a trade school, Marsh said. The Springdale campus would be modeled after the Little Rock location, he said.

Anyone 19 or older who lives in Arkansas is eligible to attend the center, including those who've received their GED, Marsh said.

A high school diploma has proven to be worth more than a GED, he said.

"There are some opportunities that you cannot take advantage of with a GED that you can with a high school diploma because of just the nature of the transcripted diploma," Marsh said.

Northwest Technical Institute and Northwest Arkansas Community College both offer opportunities for adults to get their GED in the region.

The center also provides each student with a life coach to help him overcome barriers and find support resources through Goodwill and the community, Marsh said.

Center classes are accelerated to help create flexible schedules for working students, he said, and are offered in eight-week sessions.

The attached trade school offers industry-recognized training in areas that include welding, industrial truck operator, pharmacy technician and environmental services technician, according to the center's website.

Classes at the trade school are free for Excel Center graduates, Marsh said. Free learning opportunities and certifications that cost up to $3,700 to obtain are offered for the community as well, he said.

"We don't want to offer a student a certification that doesn't have a business need in the region," he said.

That investment will contribute toward creating an educated and trained workforce for Northwest Arkansas, Marsh said.