Heat advisory set for much of state 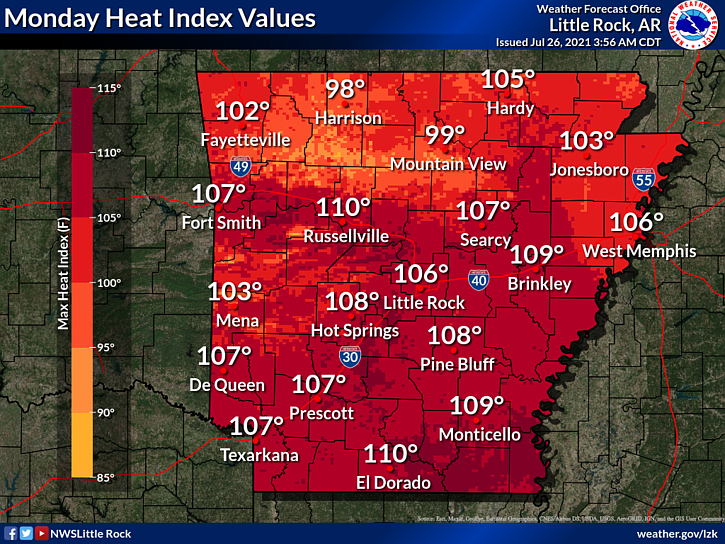 Heat index values across much of the state are predicted to be over 100 degrees, according to this National Weather Service graphic

Much of Arkansas is under a heat advisory Monday, with heat indices expected in some areas to reach 110 degrees, forecasters say.

The advisory, which stretches from the state’s southern border north of Jonesboro, is in effect from noon to 7 p.m., according to the National Weather Service.

Forecasters encourage residents who must be outdoors for an extended period of time to take precautions, including wearing lightweight and loose-fitting clothing, scheduling work for the evening and taking frequent water breaks in the shade or indoors.

Though temperatures across most of the state aren’t expected to breach 100 degrees, heat index values — which measure how hot the air feels when humidity is factored in — are predicted in some portions of Arkansas to reach 110 degrees or higher, the weather service says.

Scattered thunderstorms are also predicted in Arkansas on Monday, with heavy rainfall accompanying the stronger storms.

Forecasters expect high temperatures to remain in the 90s throughout the rest of the week before reaching 100 degrees on Friday. The weather service says isolated showers and thunderstorms are predicted to remain in the forecast over the second half of the week.