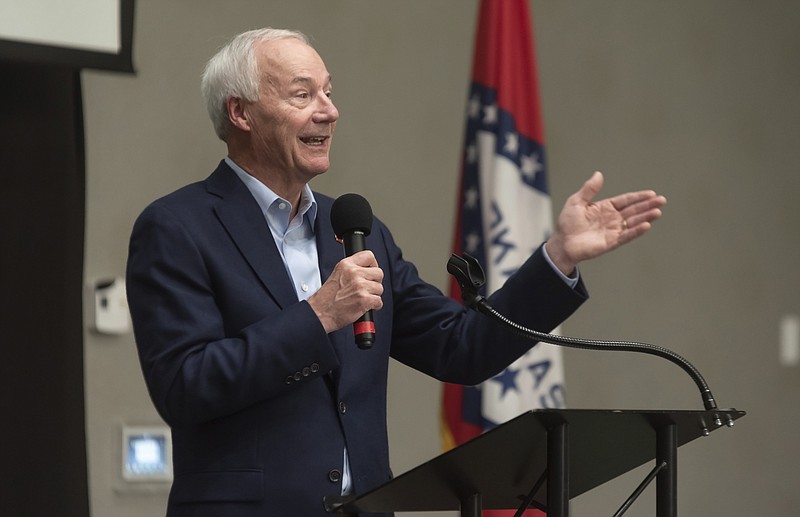 FILE - In this July 15, 2021, file photo, Arkansas Gov. Asa Hutchinson speaks during a town hall meeting in Texarkana, Ark. Facing growing vaccine hesitancy, governors in states hard hit by the coronavirus pandemic are asking federal regulators to grant full approval to the shots in the hope that will persuade more people to get them. The governors of Arkansas and Ohio have appealed in recent days for full approval as virus cases and hospitalizations skyrocket in their states. (Kelsi Brinkmeyer/The Texarkana Gazette via AP, File)

Another 44 people have been hospitalized with covid-19 in Arkansas, reflecting a delta variant that will not be tamed until more get vaccinated, the governor said Sunday.

According to the Arkansas Department of Health, a total of 919 virus patients were in hospitals and 173 were on ventilators -- 18 more than on Saturday. Such numbers haven't been seen in the state since late January.

Hospitalizations were above 1,300 in January at the height of the pandemic, he said, but that doesn't mean there is a cushion now.

"Because there's been so many postponed health needs that are crashing in on the hospital," Hutchinson said. "So the hospitals are totally full, and they have to then make room for the covid patients. And that creates its own set of problems."

Cam Patterson, chancellor of the University of Arkansas for Medical Sciences, tweeted Sunday that UAMS Medical Center has 60 patients with covid-19, up from 50 patients last weekend and approaching the January high of 63. Of those, 26 patients are in the intensive care unit, 16 are on ventilators and five are on heart-lung bypass.

There is no indication that things are slowing down, Patterson tweeted, urging people to "mask up" and "vax" up.

The state has one of the lowest immunization rates in the country, with only 36% of residents fully vaccinated. Across the nation, 49.1% people are fully vaccinated, according to the Centers for Disease Control and Prevention.

Six more people have died from the virus, bringing Arkansas' death toll to 6,054.

On Sunday, Pulaski County had the most new cases with 167, followed by Benton County with 69 and Saline County with 61.

Correctional facilities accounted for 56 of the active cases while community spread accounted for 15,221, according to the Health Department.

Hutchinson posted that both he and his wife are vaccinated and consider it a life-saver.

He told Van Susteren that it's the unvaccinated who are ending up in hospitals.

"Even though you still can get covid virus if you've been vaccinated, maybe a 1 in 10 chance of that, your chances of going to the hospital are almost minuscule," he said.

On Sunday, the Health Department reported that 6,218 more vaccine doses had been administered, with another 1,481 Arkansans becoming full immunized.

Hutchinson said Sunday morning on CNN's "State of the Union" that this is a pivotal moment in the race against the coronavirus.

"And what's holding us back is a low vaccination rate," Hutchinson told host Jake Tapper. "We're doing all that we can. And I made the decision that it's really not what the government can tell you to do, but it is the community and their engagement and citizens talking to other citizens and trusted advisers, whether it's the medical community or whether it's employers. Those are key."

Hutchinson has held town meetings around the state to engage with communities, he said. The state has seen a 40% increase in vaccinations since the meetings started, he said.

The hardening resistance against the vaccines comes from false information, he said.

"It is myths. As I go into these town hall meetings, someone said: 'Don't call it a vaccine. Call it a bioweapon.' And they talk about mind control," Hutchinson said. "Well, those are obviously erroneous. Other members of the community correct that."

Van Susteren asked whether it would be helpful if more Republican leaders would get out and support vaccination, but Hutchinson replied that he thinks they already are. He recently attended a Republican governors meeting where, he said, everyone was in favor of and had gotten the vaccine.

"And so everybody deals with their community and their culture and their state uniquely. So I think it is important that we have bipartisan messages from all leaders across the board that you get vaccinated," he said.

Hutchinson said he remains hopeful that the state will be ready for school in the next month.

Arkansas will not have a vaccination mandate, as "that would even cause a greater reaction of negativity toward the government and that imposition on freedom," Hutchinson said on CNN.

As far as potential mask mandates, it would be up to the Legislature to lift the current statewide ban.

"That's something we're going to have to continue to weigh, depending upon vaccination rates and how they proceed between now and school," he said.

In both interviews Sunday, Hutchinson reiterated his previous statements that the focus should be on pushing vaccination, not on the mask-wearing debate.