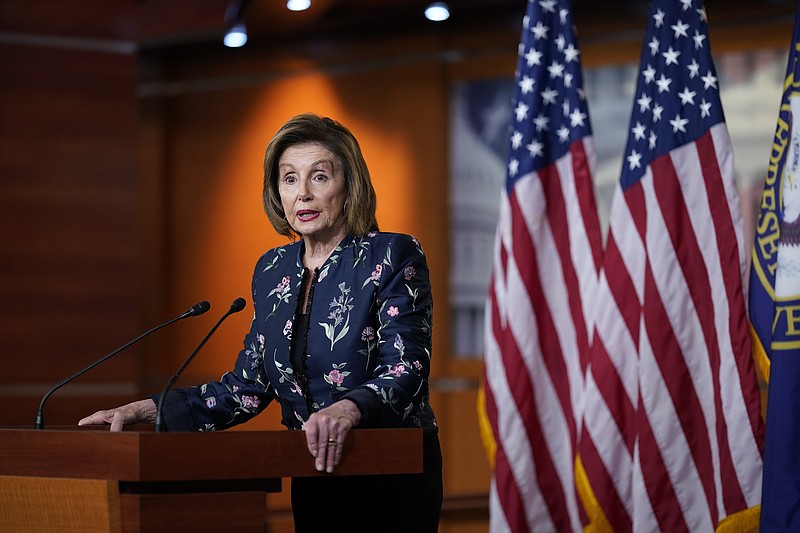 FILE - In this July 22, 2021, file photo Speaker of the House Nancy Pelosi, D-Calif., meets with reporters at the Capitol in Washington. Pelosi and Liz Cheney have the most unlikely of partnerships. The two longtime political adversaries have joined forces to investigate the Jan. 6 insurrection at the U.S. Capitol. Pelosi tapped Cheney to join the committee that will hold its first hearing next week. (AP Photo/J. Scott Applewhite, File)

WASHINGTON -- House Speaker Nancy Pelosi on Sunday said she wasn't backing off her plan to hold up a bipartisan infrastructure package until the Senate delivers a larger plan by Democrats that's expected later this year, prompting a rebuke from Senate Republicans.

Pelosi said Sunday on ABC's "This Week" that she was "enthusiastic" about the $1 trillion bipartisan package and that she hopes the Senate passes it. Her comments came as negotiators were trying to wrap up the final details on their plan, which could be announced as early as today.

But Pelosi warned: "I won't put it on the floor until we have the rest of the initiative."

Democrats are still working on the details of a $3.5 trillion package of social spending over a decade on top of the bipartisan infrastructure deal, and many want to ensure both packages become law.

"We are rooting for the infrastructure bill to pass, but we all know that more needs to be done," she said.

Sen. Rob Portman, R-Ohio, a top negotiator on the infrastructure deal, warned that Pelosi's plan could threaten the agreement.

"What she has just said is entirely counter to what President [Joe] Biden has committed to, and what the Senate is doing, which is a two-track process," he said. "The infrastructure bill has nothing to do with the reckless tax-and-spend extravaganza she's talking about."

Pressed on whether that could mean Congress ends up with nothing, Portman said, "If she has her way, we could."

Portman said the negotiators are close to a deal, as a dispute with Democrats over the level of transit funding is the last sticking point.

"I feel good about getting that done this week," he said, adding that talks continued Sunday.

Sen. Mark Warner of Virginia, one of the Democratic negotiators, said on "Fox News Sunday" that he expects a deal to be ready this afternoon, when the Senate is likely to take another test vote to start debating legislation.

Some Republicans have insisted the bipartisan deal and the larger Democratic package not be linked, and after a Republican uproar, Biden walked back an earlier threat not to sign one without the other.

In the 50-50 Senate, 10 Republicans will need to back the bipartisan package to stop a filibuster. The Democrats' plan will be protected from filibusters and can pass with a simple majority once they agree on a budget blueprint, which Senate Majority Leader Charles Schumer, D-N.Y., plans to bring to the Senate floor before the August recess.

Separately, Pelosi said Democrats wouldn't allow a debt default with the expiration of a debt-limit suspension.

"The full faith and credit of the United States is never to be placed in doubt; it is in the Constitution, and it will be respected," she said. "Let there be no question, we will address the debt limit."

Senate Minority Leader Mitch McConnell, R-Ky., last week suggested that Democrats pass a debt-limit increase on their own without any Republican votes.

The bipartisan team of negotiators has hit a sticking point over how much money should go to public transit, Portman said Sunday.

As discussions continued through the weekend, Portman said both sides were "about 90% of the way there" on an agreement.

"We have one issue outstanding, and we're not getting much response from the Democrats on it," he said. "It's about mass transit. Our transit number is very generous."

Democrats want to see more of the money in the roughly $1 trillion infrastructure agreement go toward boosting public transportation, which includes subways, light-rail lines and buses, in line with Biden's original infrastructure proposal.

The bipartisan group originally appeared to be moving toward agreement on more money for transit before an objection by Sen. Pat Toomey of Pennsylvania, the top Republican on the Senate Banking, Housing and Urban Affairs Committee, which oversees public transit. He cited, in part, previous covid-19 relief money that had already been allocated to public transit.

"Nobody's talking about cutting transit," Toomey said Sunday. "The question is, how many tens of billions of dollars on top of the huge increase that they have already gotten is sufficient? And that's where there is a little disagreement."

Typically, spending from the federal Highway Trust Fund has followed the traditional formula of 80% for highways and 20% for transit. Republicans including Toomey want to change that, but Democratic Sens. Sherrod Brown of Ohio and Tom Carper of Delaware say they will oppose the deal if it does.

The White House has declined to say whether Biden would push for the additional funding for transit.

"Transit funding is obviously extremely important to the president -- the 'Amtrak President,' as we may call him," White House press secretary Jen Psaki said Friday. "But we believe that members can get this work done and can work through these issues quite quickly."

Three rounds of federal covid-19 emergency assistance totaling nearly $70 billion, including $30.5 billion that Biden signed into law in March, pulled transit agencies from the brink of financial collapse as riders steered clear of crowded spaces on subway cars and buses. That federal aid is expected to cover operating deficits from declining passenger revenue and costly covid-19 cleaning and safety protocols through at least 2022.

"The historical share for public transit from the Highway Trust Fund is 20%," Paul Skoutelas, president of the American Public Transportation Association, said Sunday. "It is the absolute minimum acceptable level to help sustain our nation's public transportation systems. It is imperative that we make robust, forward-looking investments to modernize and expand public transit that will assist in our economic recovery from the covid pandemic and get Americans back to work."

A Democratic aide, granted anonymity to discuss the private talks, said that beyond transit, there are other unresolved issues on how to pay for the package. For instance, details on broadband funding, as well as whether to tap into leftover covid-19 relief funds previously approved by Congress, continue to be discussed, the aide said.

Democrats are seeking a compromise to pay for the package after Republicans dashed a plan to boost the IRS' ability to go after tax scofflaws, though Warner said he remains optimistic about reaching a deal.

"We're down to the last couple of items, and I think you're going to see a bill [this] afternoon," Warner said Sunday.

Information for this article was contributed by Steven T. Dennis of Bloomberg News (TNS) and by Hope Yen and Lisa Mascaro of The Associated Press.