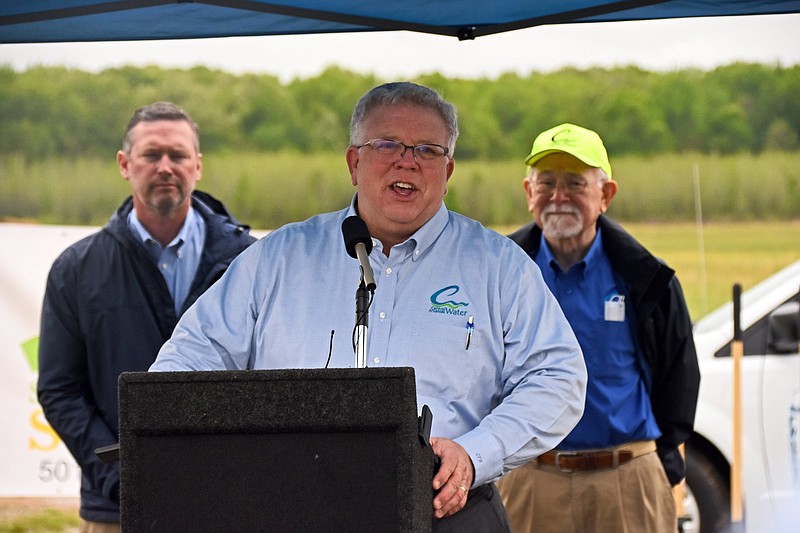 Tad Bohannon, CEO of Central Arkansas Water, speaks Wednesday during the ground breaking ceremony for the solar plant at 1300 Richie Rd. in Cabot. Central Arkansas Water, the owner of the property, will lease it to Scenic Hill Solar for construction and operation of the 4.8 MW solar power plant. .(Arkansas Democrat-Gazette/Staci Vandagriff)

The utility's board of commissioners heard a presentation earlier this month from Linda Smith, Central Arkansas Water's sustainability manager, about the concept of committing to net-zero emissions. However, the board was not asked to take action at the meeting.

Tad Bohannon, the utility's chief executive officer, suggested that the issue is important to public health.

"This is not necessarily something we're on the leading edge of," Bohannon said at the July 15 meeting.

He added that "this is something that active and forward-thinking companies and utilities are looking at, and looking at what they can do as far as net-zero."

Bohannon suggested that future federal funding could be tied to adoption of a net-zero carbon emissions strategy.

Under the recommendation put forward by Smith, the utility would pledge to achieve net-zero carbon emissions by 2050.

Those carbon-emissions reductions from energy usage would come from upgrades to the Ozark Point Water Treatment Plant, as well as the utility's fleet, she told commissioners.

She said the next 25 vehicles the utility buys "probably need to be electric vehicles to reach this goal."

Smith echoed Bohannon at one point when she acknowledged the potential gap between words and reality.

"A pledge is not the same as action," she said. "There are so many companies right now that are saying, 'We'll be net-zero by 2030.' But they need to be pretty far along in their plan if they're going to make it by 2030."

She said 2050 was the typical goal aligned with the Paris Climate Agreement.

There are no federal, state or local requirements to go carbon-neutral that are applicable to Central Arkansas Water, she said.

"The major challenge we have is not that we wouldn't be able to fund it, not that ratepayers might not accept it, but if we keep postponing it, we keep delaying it, we keep saying, 'We can look at this down the road,' we will run out of time to actually reach the goal," Smith said.

At that point, she said, the utility would be faced with very large capital expenditures rather than a well-reasoned plan within Central Arkansas Water's routine five-year capital cycle.

An action plan would lay out goals by department and by decade, she said. Board members would have the opportunity to provide oversight as projects are brought forward for funding.

A Central Arkansas Water spokesman, Douglas Shackelford, told the Arkansas Democrat-Gazette via email Wednesday that the pledge will be evaluated as part of the utility's new strategic plan. Adoption of the strategic plan will require action by the board, he said.

"There is no specific date set for action," Shackelford wrote.