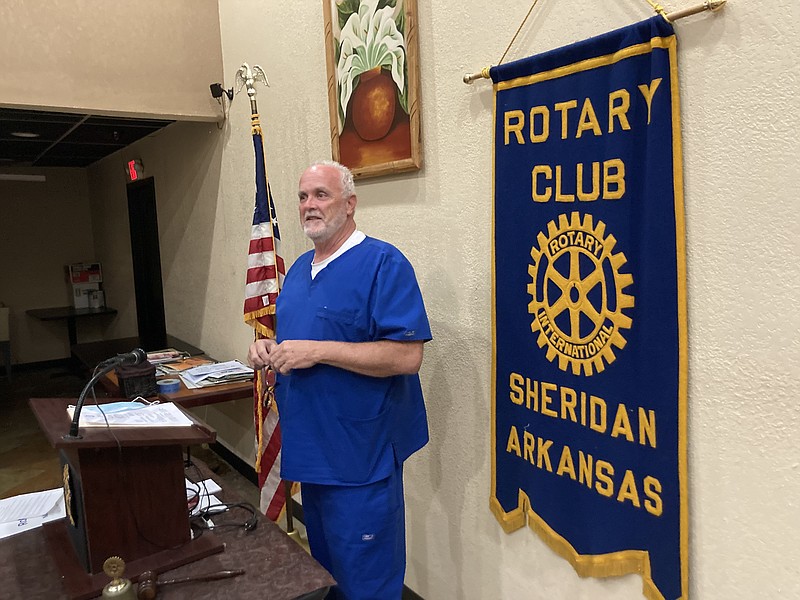 Dr. Scott Winston told the Sheridan Rotary Club that the technology that produced the covid vaccines has been around for decades and is safe. (Pine Bluff Commercial/Byron Tate)

No matter what your personal opinion is of the covid vaccination, you should take advantage of fact that there is one and it's highly effective.

That was the message from Dr. Scott Winston, a long-time Sheridan doctor who spoke last week to the Rotary Club.

"You may like it or you may not, but you should get it," he told the Sheridan civic club. "The vaccine is a good thing because of what it does. Ninety-eight percent of patients who are now being hospitalized because of covid have not had the vaccination. If that doesn't tell you something, I don't know what can."

Winston decried the misinformation that was available on social media platforms, saying "cell phones will be the death of our country."

He said he understood vaccine hesitancy first hand, having been unable to convince his own 27-year-old son to get the vaccination. Winston said his son was basing his decision not to get the vaccination on bogus information. When Winston asked where his son had gotten the information, the son held up his cell phone. "On here," the son said, according to Winston.

Winston said that even if people are not excited about getting the vaccination, they should think of their loved ones.

"You may not want it," he said, "but I don't think you want to spread a serious infection or death to your parents or grandparents."

The state is currently experiencing a spike in infections, the likes of which have not been seen for months. Just in the past week, daily infection rates have gone from the 1,000 range to more than 2,000 over the weekend. Much of that is being blamed on the more-infectious delta variant of the virus, which is hitting unvaccinated people the hardest. Arkansas, Winston pointed out, has one of the lowest vaccination rates in the country, making it particularly vulnerable to covid spread.

Winston said that with the original strain of the virus, many of the people having to be hospitalized were in their mid-60s and older. But that has changed, he said.

"Now we're seeing people down in their mid-40s going to the hospital," he said. "We used to be concerned with older folks, but now it's everybody. Now, we are seeing younger kids."

At his clinic in Sheridan, Winston said one 4-year-old tested positive for the virus.

As for "break-through" cases, in which a fully vaccinated person tests positive for covid, Winston said the vaccinations are doing their jobs.

"You are protected against serious symptoms or death with these vaccines," he said. "These people have had mild symptoms."

Some people have been hesitant to get the vaccine because the ones on the market are so new, but Winston explained that the technology behind the vaccines -- messenger RNA -- has been in place for many years. The difference is that the vaccines being created today to fight covid are the first m-RNA vaccines to be produced and tested in large-scale phase-3 human trials, Winston said.

Messenger RNA, however, uses a tiny fragment of the virus's protein that is harmless. The body then creates the necessary antibodies to fight the virus.

"Messenger RNA vaccines do not use the live virus," he said. "They do not affect or interact with our DNA in any way. Researchers have been studying and working with m-RNA vaccines for decades. The benefit is those vaccinated gain protection without ever having to risk the serious consequences of getting sick with covid-19."

Some people have also balked at taking a vaccine that was produced so quickly, Winston said. In most cases, it takes five to 10 years for a vaccine to be fully developed. But much of the red tape was cut in the development of the covid vaccines, and government money was poured into the project, allowing the vaccines to be produced in eight months and available to the public in a year.

"These vaccines did go through all of the regulatory steps," Winston said. "It just didn't take all of the time it normally takes."

For now, the long-term effects of the vaccine are not known, an aspect that is troubling, especially for those couples trying to get pregnant or where a woman is breastfeeding.

"I do understand that concern," he said, "but I may not agree with it. We will all be interested to look at this in two to three years to see if someone has grown a third eye. But think of what vaccines have done for the world. I know that people are concerned, but if we know it works, we know it works."