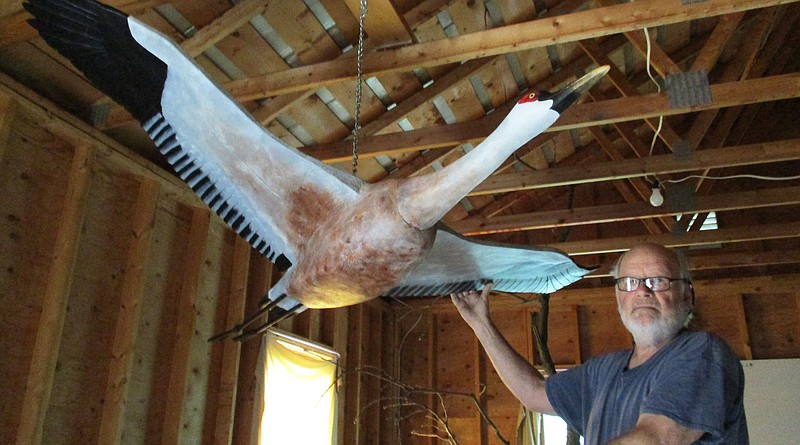 Dean S. Hurliman carved this sandhill crane in his garage at home in Burlington, Iowa. (Special to the Democrat-Gazette/Dean Hurliman)

Dean S. Hurliman carves sculptures of birds that are beautiful to look at and difficult to see.

His wooden artworks of extinct, threatened or endangered American birds are displayed in museums, nature centers, wildlife management centers and universities across the United States.

Hurliman, from Burlington, Iowa, does with his carving tools a bit of what John James Audubon did with his brushes and paint: He makes life-size representations of America's birds easily available to those who are unable to see the real thing.

"I give the birds away to interested persons and institutions in hopes they are used for educational purposes," he said in a recent email. "My birds are all over the U.S., especially the South."

He has given birds to Tensas River National Wildlife Refuge in Louisiana; the Big Thicket National Preserve in Kountze, Texas; Museum of the Red River in Oklahoma; Lower Suwannee River NWR in Florida; Pascagoula River Audubon Center in Mississippi; Auburn University; Louisiana State University; the McKissick Museum at the University of South Carolina ...

In late June, he shipped four carvings to the Garland County Library in Hot Springs.

He was prompted to make the gift to the library in response to the "Bird and a Book" series the library hosts with the Garland County Audubon Society. Program 3 of the series, "Ivory-billed Woodpecker: Grail Bird," was livestreamed June 23 (see arkansasonline.com/726grail).

The four carvings depict a passenger pigeon, a Carolina parakeet, an ivory-billed woodpecker and a pileated woodpecker.

Passenger pigeons were once so abundant in North America that observers claimed their migrating flocks blocked the sun for days. The species was overharvested by hunters during the 1800s, and the last passenger pigeon, a female named "Martha," died in the Cincinnati Zoo in 1914.

The Carolina parakeet was the only parrot species native to Arkansas. It became extinct in the wild when the last few survivors of its tribe were shot by an ornithologist collecting specimens for a Florida museum in 1904. Yet a few of these bright green and yellow birds with thick bills continued to live in captivity. The last one, a male, died in 1918 — in the same zoo and the very cage where Martha took her last breath four years earlier.

The last universally accepted sighting of an ivory-billed woodpecker was in Louisiana in 1945. In Hurliman's depiction, the majestic bird is in flight with its neck extended, soaring on wings with a 20-inch span. Its chisel-shaped bill is a glistening white. The bird is designed to be displayed by suspending it from the ceiling with two thin wires.

The pileated woodpecker is not extinct, but Hurliman carves its image so that upon seeing his carving of the ivory-bill, people will have a frame of reference. An observer can note the similarities and differences between the two large woodpeckers.

Once, museums, academic laboratories, bird scientists and collectors contributed to the extinction of birds through their lust to possess skins and/or stuffed mounts to display. They ravaged forests, fields and swamps where the birds nest. The rarer the bird, the more persecuted it became.

Gallery: For the love of birds

Hurliman sees his carvings as a sustainable way to promote awareness of the possibility of extinctions and a sense of urgency about protecting endangered species.

His work is authentic in that the birds are carved "in the round" (not relief carvings), life size, proportioned appropriately and painted in true-to-life colors. Each sculpture, even those of the same species, might have a slightly different pose. Individual feathers are only suggested in Hurliman's work and not etched in fine detail.

He prefers that children who see his carvings be allowed to touch them -- not to play with them as they might a mere toy, but to enhance wonder.

The carvings Hurliman now makes of extinct birds are unlike the many wood duck, merganser and mallard decoys he whittled in the past. He carved those for himself or donated them to Ducks Unlimited fundraisers. They were made for fireplace mantels and the shelves of hunting lodges. He carved poems into their bases.

He carves to save the biosphere.

In telephone conversations, Hurliman, 75, talked about his life. "I was a janitor," he said. "My wife for 49 years is Karen, who was a hairdresser and secretary at the Lutheran Church.

"We like to walk on the trails in the woods near our home and be outdoors.

"It took me 10 years to build my home with my own hands. The house sits on 11 rural acres near Burlington, Iowa, the town where I have lived all my life."

I asked if he might come to Arkansas as my guest someday and go birding. He declined.

"We have an adult son, John, who has profound physical disabilities. We couldn't stand to be away from him for more than a day or two," he explained. "He is blind and confined to a wheelchair. He lives in a great facility near our home that provides excellent care. We visit him every week, and like to take him to football games and sit by the band so he can enjoy the loud noises.

"He also likes to listen to my chainsaw. It might be hard to understand this, but even though he's verbally noncommunicative, he has a great personality, and those who get to know him truly enjoy his company."

He added, "I've been to Arkansas. I came down there twice to catch a glimpse of the ivory-billed woodpecker in Dagmar [Wildlife Management Area, near Brinkley], but I never saw it. It was after those trips that I began to specialize my carving toward extinct species."

How did he get into wood carving?

"When I was a student at Iowa State University neglecting my classroom instruction in fisheries and wildlife, I randomly picked up the book 'Decoys and Decoy Carvers of Illinois' and was immediately intrigued by a black duck carved by an unknown carver. My wife, having been told of the incident, secretly purchased a fine white pine board and with an old draw knife, carving began. ...

"On the bottom of a decoy is a blank space which is often used for the maker's name and address. After a time, carving took on for me a spiritual aspect; I began burning in snippets of gospel hymns, quotations, or bits of poems from Albert Einstein, Walt Whitman, Thoreau or William Cullen Bryant onto those blank spaces. Later, I added some of my own verses, and eventually expanded that into a collection of poems that I may publish. I discovered that my carvings and poems could convey messages well beyond what might be expected by a mere wooden duck or goose."

What is he working on at the moment?

"I'm carving a sandhill crane. It is the largest bird I've ever carved. It's so much work; I don't think I'll ever carve another. When I finish, it will be displayed at the Aldo Leopold Landscape Alliance, a nonprofit research center that promotes land restoration and conservation."

He and his wife are longtime volunteers for the Leopold Landscape Alliance.

Hurliman attended Prospect Hill Elementary in Burlington, the same school as Aldo Leopold, the author, philosopher, naturalist, forester, educator and conservationist. Leopold (1887-1948) was influential in the movement for wilderness conservation and environmental ethics. He is considered the founder of the science of wildlife management.

Though more than half a century separated their lives, Leopold's ideas have cast a long shadow over Hurliman's work.

Hurliman obtained higher education piecemeal by attending seven colleges and universities and stringing together a strange brew of classes to fit his fancy or interests at the time. He never quite followed a clear academic pathway.

He also never had what might be called a professional career. Instead he chose to work mostly with his hands, as a carpenter, hod carrier, waiter, steelworker, warehouse worker, sandhog and as a janitor. The clearest influence on his thinking and education, however, was Leopold, the man who left Prospect Hill Elementary 60 years before he did.

In my four or five phone visits with Hurliman, Leopold's name came up. When I read sections of Leopold's seminal book "A Sand County Almanac," I saw how similar the two men were in their thinking about the natural world. In the section titled "On a Monument to the [Passenger] Pigeon," Leopold wrote, "For one species to mourn the death of another is a new thing under the sun."

In "Pines Above the Snow," Leopold wrote, "Acts of creation are ordinarily reserved for gods and poets, but humbler folk may circumvent this restriction if they know how. To plant a pine, for example, one need be neither god nor poet; one need only own a good shovel."

Also, he wrote, in "The Sand County Almanac" chapter titled "The Land Ethic": "A thing is right when it tends to preserve the integrity, stability and beauty of the biotic community. It is wrong when it tends otherwise."

Dean S. Hurliman has carved out his own niche beside Leopold, as a poet and carver of extinct birds, to help the world learn right from wrong.

Jerry Butler writes frequently about Arkansas birds and the people who enjoy them. Share your stories with him at