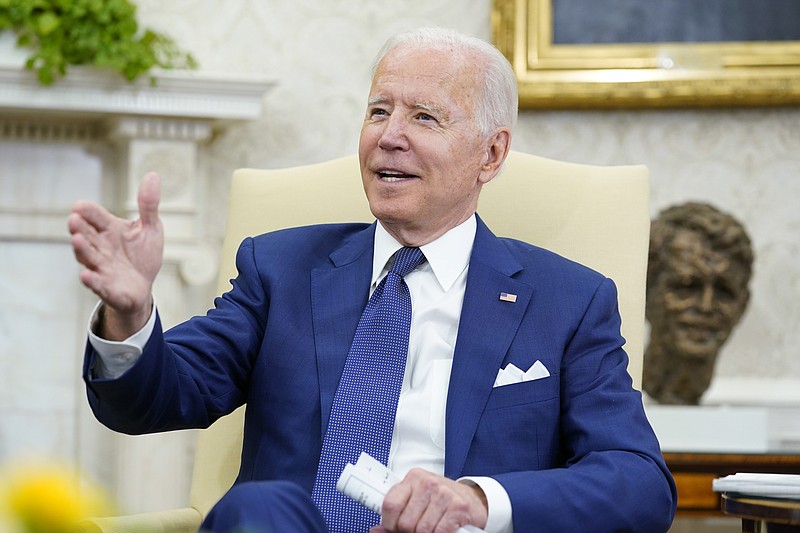 WASHINGTON -- President Joe Biden said Monday that the U.S. combat mission in Iraq will conclude by the end of the year, an announcement that reflects the reality on the ground more than a major shift in U.S. policy.

Even before Biden took office, the main U.S. focus has been assisting Iraqi forces, not fighting on their behalf. And Biden did not say if he planned to reduce the number of troops in Iraq, now about 2,500.

The announcement comes on the heels of Biden's decision to withdraw fully from Afghanistan nearly 20 years after the U.S. launched that war in response to the Sept. 11, 2001, attacks. Together, the wars in Afghanistan and Iraq have heavily taxed the U.S. military and kept it from devoting more attention to a rising China, which the Biden administration calls the biggest long-term security challenge.

[Video not showing up above? Click here to watch » https://www.youtube.com/watch?v=5Ucl-9kX3wA]

The United States needs to "fight the battles for the next 20 years, not the last 20," Biden has said.

For years, U.S. troops have played support roles in Iraq and in neighboring Syria, which was the origin of the Islamic State group that swept across the border in 2014 and captured large swaths of Iraqi territory, prompting the U.S. to send troops back to Iraq that year.

Speaking to reporters during an Oval Office session with Iraqi Prime Minister Mustafa al-Kadhimi, Biden said his administration remained committed to a partnership with Iraq -- a relationship that has been increasingly complicated by Iranian-backed Iraqi militia groups. The militias want all U.S. troops out of Iraq immediately and have periodically attacked bases that house American troops.

"Regardless of whether their deployment is called a combat mission, U.S. troops will remain under regular attack as long as they remain in Iraq," Caldwell said in a statement. "An American military presence in Iraq is not necessary for our safety and only risks the loss of more American life."

Biden said the military will continue to assist Iraq in its fight against the Islamic State group, or ISIS. A joint U.S.-Iraq statement said the security relationship will be focused on training, advising and intelligence-sharing.

"Our shared fight against ISIS is critical for the stability of the region and our counterterrorism operation will continue, even as we shift to this new phase we're going to be talking about," Biden said.

The shift from a U.S. combat role to one focused on training and advising the Iraqi security forces was announced in April, when a U.S.-Iraqi statement said this transition allowed for the removal from Iraq of any remaining U.S. combat forces on a timetable to be determined later. It did not specify what combat functions the U.S. was engaged in then, nor did Biden get into such specifics Monday.

"We're not going to be, by the end of the year, in a combat mission," he said.

White House press secretary Jen Psaki declined to say how many troops would remain in Iraq by year's end.

"The numbers will be driven by what is needed for the mission over time, so it is more about moving to a more advising and training capacity from what we have had over the last several years," she said.

The U.S. troop presence has stood at about 2,500 since late last year when then-President Donald Trump ordered a reduction from 3,000.

"U.S. troops in Iraq help in a political sense balance or contain Iran, which is a serious regional threat," said James Jeffrey, a former U.S. ambassador to Iraq.

"The objective of both sides is for nothing to change and to keep about 2,500 U.S. troops there that would do things they are already doing," said Sarhang Hamasaeed, director of Middle East programs at the United States Institute of Peace. "That's supporting Iraqi security forces, but not engage in combat."

However, "You leave Iraq [entirely], Iran will go deeper and deeper and dominate the state, giving them control over strategic energy reserves," Hamasaeed said. "That's not good for the global economy and stability and efforts to curb Iran's agenda in the region."

Richard Haass, president of the Council on Foreign Relations, said: "The Iraqi government can say we're less reliant on these foreigners, and the Biden administration can point to this as another example of how it is dialing down America's involvement in these long-term conflicts in the Middle East."

The Iraqi government in 2017 declared victory over the Islamic State group, which is now a shell of its former self. Still, it has shown it can carry out high-casualty attacks. Last week, the group claimed responsibility for a roadside bombing that killed at least 30 people and wounded dozens in a busy suburban Baghdad market.

In his remarks alongside Biden, al-Kadhimi thanked the United States for its support.

Back home, al-Kadhimi faces no shortage of problems. Iranian-backed militias operating in Iraq have stepped up attacks against U.S. forces in recent months, and a series of devastating hospital fires that left dozens of people dead and soaring coronavirus infections have added fresh layers of frustration for the nation.

For al-Kadhimi, the ability to offer the Iraqi public a date for the end of the U.S. combat presence could be a feather in his cap before elections scheduled for October.

The Iraqi prime minister made clear before his trip to Washington that he believes it's time for the U.S. to wind that mission down.

"There is no need for any foreign combat forces on Iraqi soil," al-Kadhimi told The Associated Press last weekend.

The U.S. mission of training and advising Iraqi forces has its most recent origins in President Barack Obama's decision in 2014 to send troops back to Iraq. The move was made in response to the Islamic State group's takeover of large portions of western and northern Iraq and a collapse of Iraqi security forces that appeared to threaten Baghdad. Obama had fully withdrawn U.S. forces in 2011, eight years after the U.S. invasion.

Pentagon officials for years have tried to balance what they see as a necessary military presence to support the Iraqi government's fight against the Islamic State with domestic political sensitivities in Iraq to a foreign troop presence.

The vulnerability of U.S. troops was demonstrated most dramatically in January 2020 when Iran launched a ballistic missile attack on al-Asad air base in western Iraq. No Americans were killed, but dozens suffered traumatic brain injury from the blasts.

Ever since that strike, al-Kadhimi has been under pressure from Iraq's Shiite political parties to end the U.S. mission in Iraq altogether.

Now, "No one is going to declare, 'Mission accomplished,'" said an administration official speaking on condition of anonymity to discuss strategy.

Still, the official called the moment "important and poignant" after some 18 years of American entanglement in Iraq.

Gil Barndollar, a former Marine who served two tours in Afghanistan, said it's past time to wind down the war machinery of the post-9/11 era.

"It's overdue," said Barndollar, a senior fellow at the Defense Priorities think tank. "We have something like four times the number of jihadist groups as there were on 9/11. The global war on terror has failed by just about any measure."

But the trauma of the terrorist attacks two decades ago -- which came out of a clear blue sky to kill nearly 3,000 Americans -- has not faded, and some warn against turning the page prematurely. Sen. Lindsey Graham, R-S.C., has called Biden's approach "a disaster in the making" that risks a resurgence of al-Qaeda and the Islamic State.

And there are multiple signs that a clean break will not be easy. The Taliban has made significant gains in Afghanistan since the United States began pulling out. The American diplomats who remain there face significant challenges. Biden continues grappling with whether Iran, a key Middle East adversary, can be coaxed back into a nuclear deal.

In Iraq, Biden faces pressure to do more against Iranian-backed attacks, and by leaving some noncombat forces behind in the country, the administration appears to acknowledge a continuing military mission there, if a lower-profile one.

"The goal is the defeat of ISIS," said one administration official, speaking on condition of anonymity to discuss strategy. "The role of U.S. forces and coalition forces will recede deep into the background."

Biden's aides stress that the United States maintains broad economic, humanitarian and other ties to Iraq.

Natasha Hall, a senior fellow at the Center for Strategic and International Studies, said Iran's growing influence is one of several reasons Biden's shift might not go as planned. "If history is any guide, the U.S. risks getting sucked back into the Middle East for a range of reasons, including but not limited to terrorism," Hall said.

The crosscurrents were evident Monday as Biden hosted the Iraqi prime minister for the meetings meant to draw a curtain on the costliest, deadliest conflict of the global war on terrorism -- and one with an acutely painful legacy for the president himself.

Biden's late son Beau Biden served as a reservist in Iraq, and Biden has said he suspects toxins from that deployment led to Beau's fatal brain cancer. The president's son died in 2015.

Biden is also hewing to his own suspicions that Pentagon leaders will always argue to stay in a fight or add forces to it, said people who have spoken to the president about Afghanistan and Iraq.

"'Maybe I've been around this town for too long, but one thing I know is when these generals are trying to box in a new president,'" Obama says Biden told him. "'Don't let them jam you.'"

Biden has ordered a global "posture review" of U.S. military deployments, "so that our military footprint is appropriately aligned with our foreign policy and national security priorities."

Information for this article was contributed by Robert Burns, Aamer Madhani, Qassim Abdul-Zahra and Samya Kullab of The Associated Press; by Anne Gearan of The Washington Post; and by Annie Karni and Eric Schmitt of The New York Times. 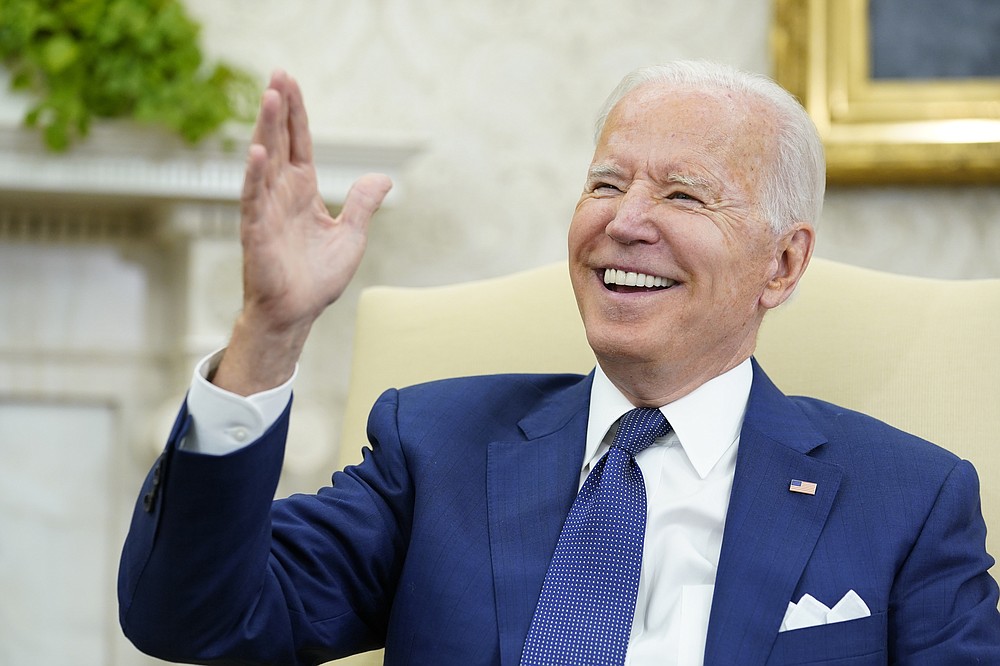 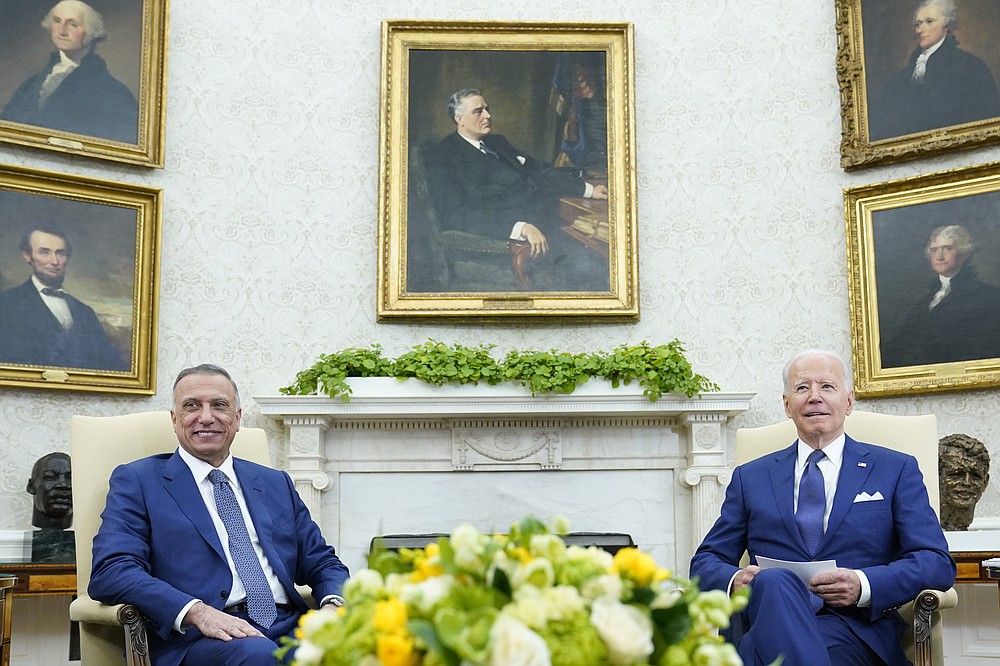 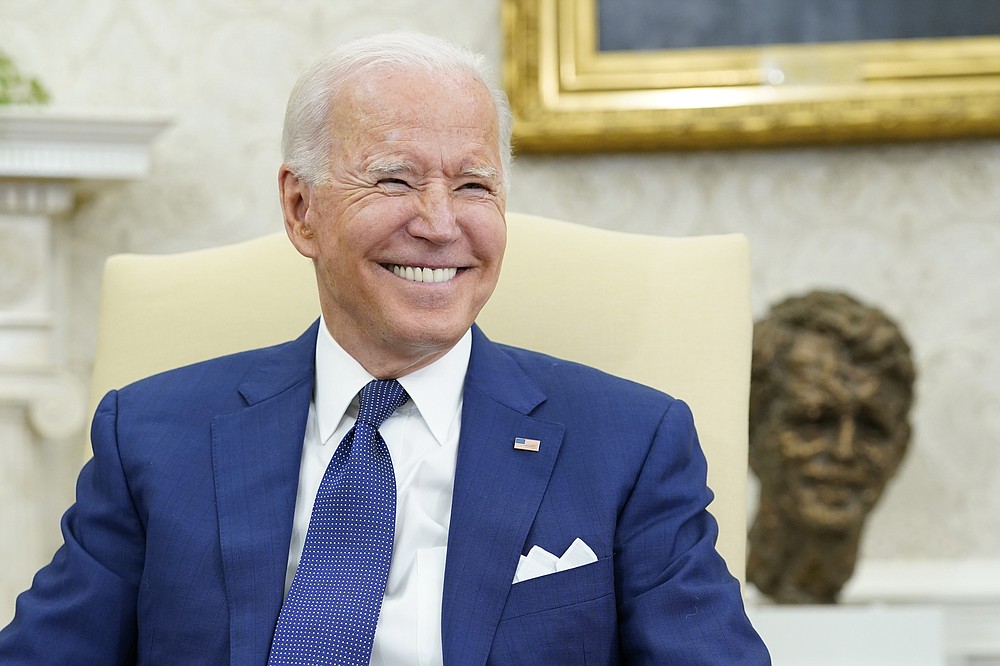 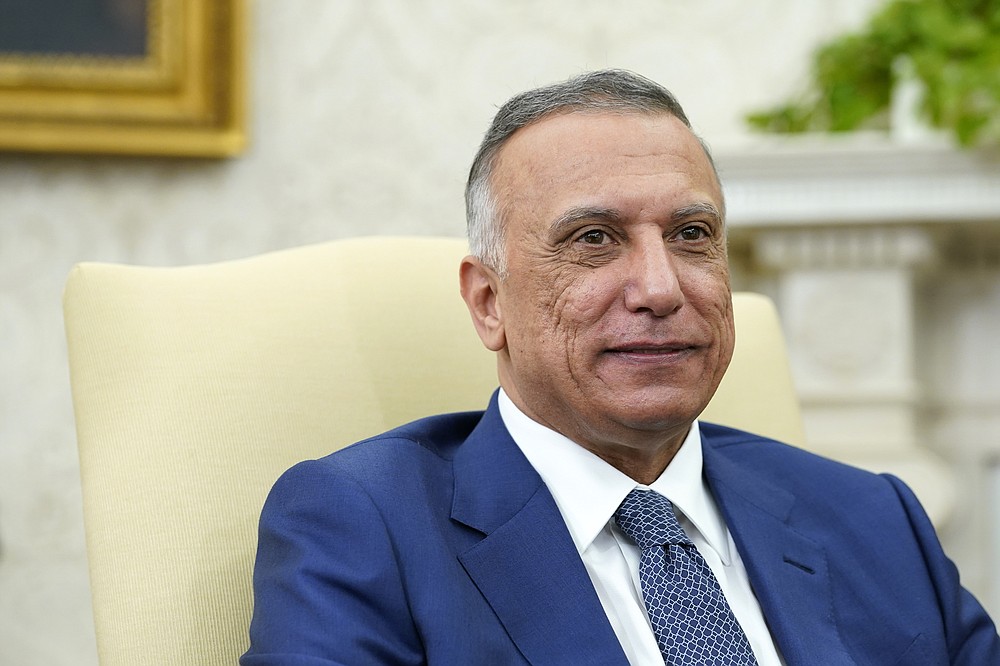 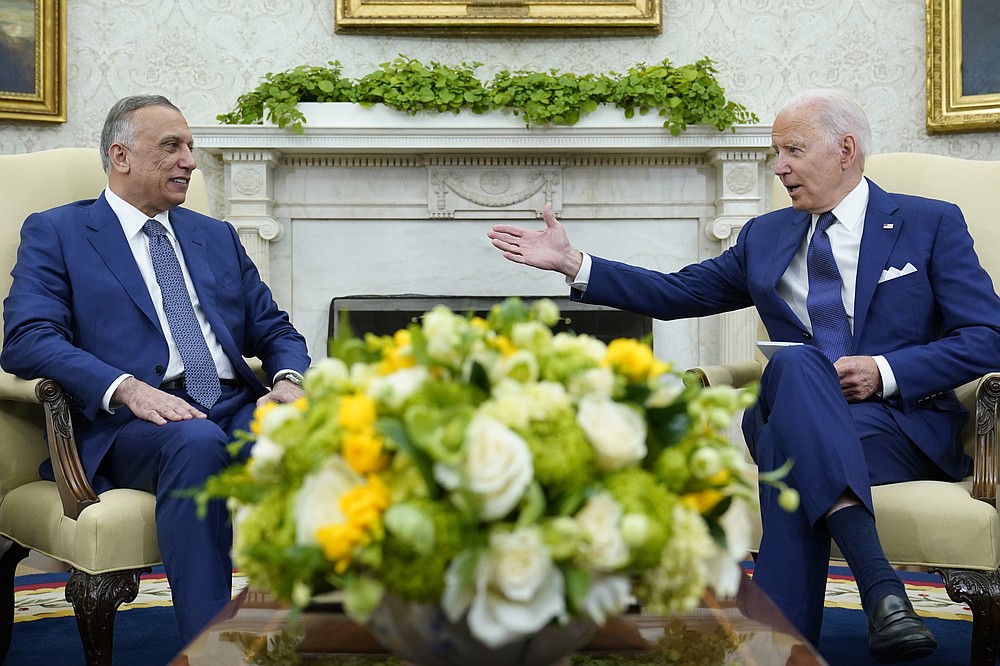