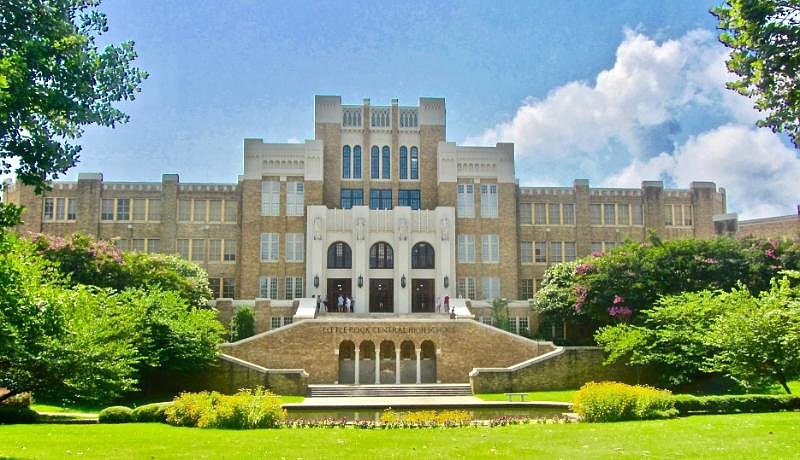 The story with its riveting message came near the end of Brian Schwieger's walking tour for two dozen visitors to Little Rock Central High School on a recent afternoon.

A seasoned Central High ranger, Schwieger shared his vivid recollection on the school's bottom floor, near the door to a girls' restroom. His account involved an older woman and her adult daughter who'd taken one of his tours several years ago.

"We were standing about where you are now, and the mother broke down sobbing uncontrollably as I began talking," he said. "When I finally was able to ask what was the matter, she said she'd been in that restroom as a Central High student back in 1957, after the Little Rock Nine students had desegregated the school. 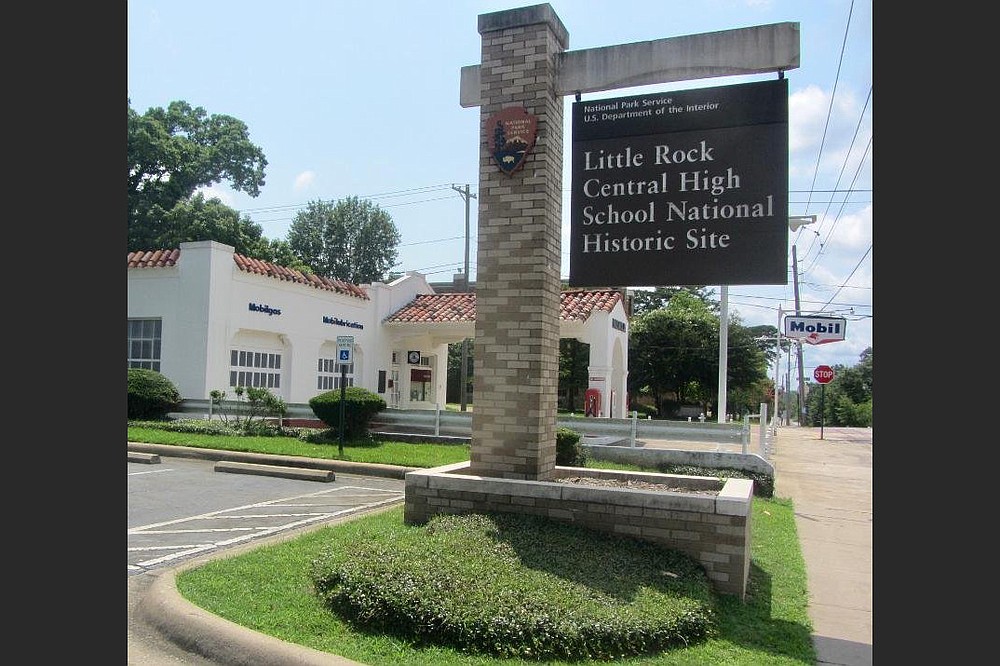 In 1957, reporters phoned in Central High stories from this nearby service station. (Special to the Democrat-Gazette/Marcia Schnedler)

"A half-dozen other white girls had broken into the stall occupied by one of the six Black girls and pulled her out. She saw them tormenting the victim. They'd thrown her on the floor and pulled up her skirt. They were hitting her. The woman remembered having just turned away and walked out. 'I'm so ashamed that I did nothing to stop it,' she said."

The message behind this woman's rueful memory, according to Schwieger, is that we too should feel at least some shame along with sorrow if we fail to act in the face of cruelty — even though we weren't among the evildoers. He added, "That is as true today as it was back then."

The Little Rock Nine themselves are saluted inside the school's main entrance by a display case with pairs of then-and-now photographs from 1957 and recent years. Jefferson Thomas died in 2010, but the other eight are still living.

Schwieger, who has met all eight, said that none expressed anger to him over their long-ago abuse by some white classmates, whom "they seem to have forgiven as time passed." 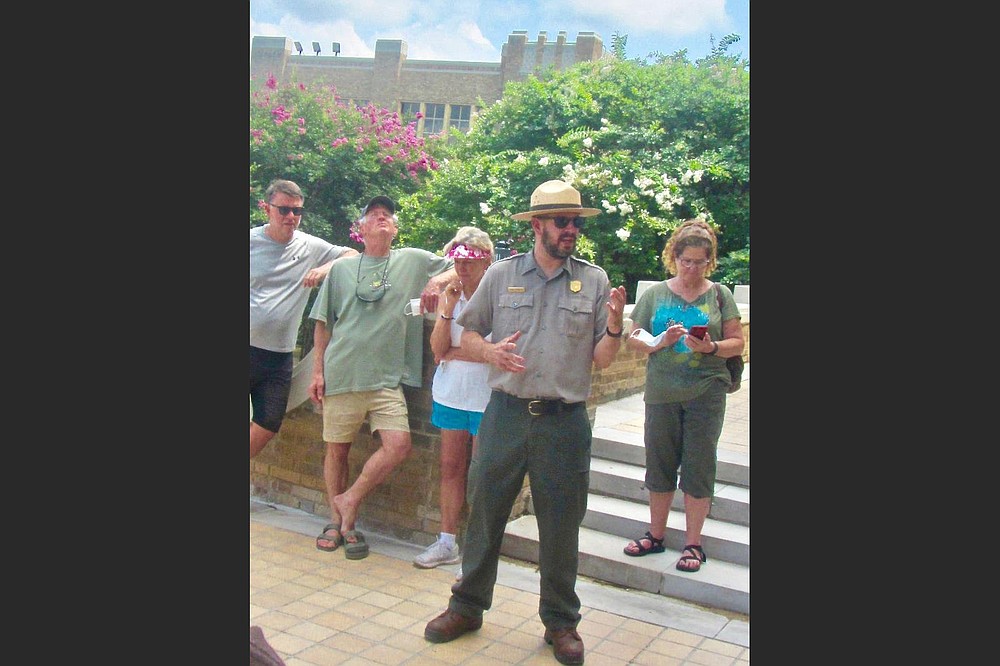 Free of charge, the 90-minute Monday-Friday walks at 9 a.m. and 1 p.m. can be joined only by reservation at least two days in advance. These tours spend most of the time inside the building, which was honored by the National Association of Architects as "America's Most Beautiful High School" after opening in 1927.

A mix of Art Deco and Collegiate Gothic styles, it was the nation's largest and most expensive ($1.5 million) high school back then. Enrollment is now about one half Black, one third white, 9% Asian and 7% Hispanic. Sixty-four years after the desegregation crisis, it remains a symbol of Black courage and white resistance early in the civil rights era.

Near the end of the tour, standing outside Central's main entrance, Schwieger pointed to a street corner down the way where a famous — also infamous — incident took place on Sept. 4, 1957. Black student Elizabeth Eckford sat calmly but fearfully on a bus-stop bench there after National Guardsmen had barred her from the school. A segregationist crowd cursed and raged while a New York Times reporter tried to comfort her.

There's still a bench at the corner, near two memorial plaques commemorating Eckford's perilous bus-stop wait. The location is a stop on ranger-led Streetscape Tours at 9 a.m. and 1 p.m. most Saturdays and Sundays. Admission to the high school is not part of the weekend programs, which require advance reservations as well. 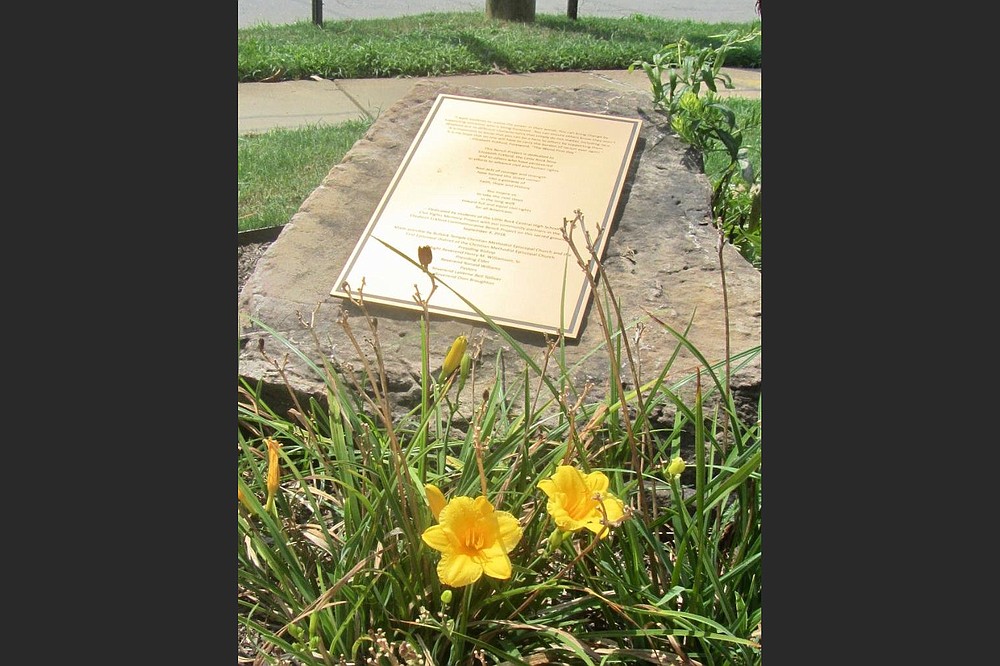 A plaque marks the bus stop where a white mob harried Elizabeth Eckford in 1957. (Special to the Democrat-Gazette/Marcia Schnedler)

Both walking-tour versions complement self-guided exploration of the visitor center, located off Daisy L. Gaston Bates Drive. That stretch of 14th Street is named for the civil rights activist who was a prime mentor of the nine Black students.

Bates' sustaining courage in the face of persistent threats and attacks on her home is among the narratives in the exhibits, which include taped interviews as well as archival film and still-photo footage from the 1957-'59 crisis. She and the Little Rock Nine remain at the heart of a story that remains both dismaying and inspirational 64 years later.

One plaque near the bus-stop bench carries words from Eckford. Her message reads in part:

"I want students to realize the power in their words. You can bring change by supporting someone who is being harassed. It is important to know that you can be a hero to others by supporting them. It is my hope that no one will have to carry the burden of racism ever again."