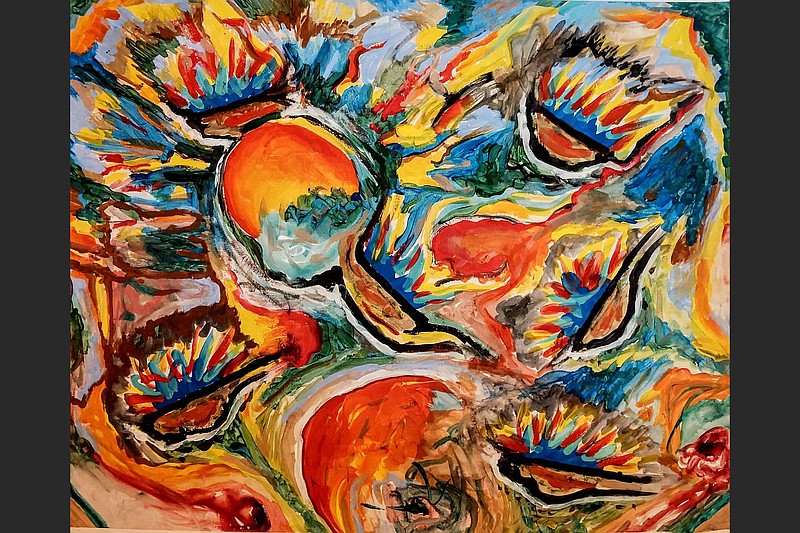 Broke and newly divorced, Jerry Colburn started making art in the late 1980s with material he scrounged out of a dumpster. Now, the 75-year-old North Little Rock artist is the subject of a career-spanning exhibit.

"1989-2021: A Retrospective of Jerry Colburn" opened May 20 at the Arts & Science Center for Southeast Arkansas in Pine Bluff and will be up until Aug. 28. The show offers a glimpse into the prolific, self-taught Colburn's progression through multimedia — collage, paintings, ink, music — and his commitment to his own unique form of determined, often mischievous creativity.

It is not arranged chronologically, so 1989's wonderfully childlike ink and pastel abstract "Fish Market" hangs alongside "Rock Band," a paper collage with acrylic from 2020.

Colburn uses clippings from fashion magazines to create outlandish, cubist-like figures and scenes in his collages. Proportions are askew, eyes don't match, mouths are off center but they somehow feel correct and whole, like in "Please Don't Tell Anyone About My Sister," a paper collage with ink from 1993.

The work shows two mismatching faces with big eyes and mouths, outlined in white on a background drawn to look like wire mesh and a ragged black border. Colburn has given the figures personality — they seem cool, somewhat aloof — through his placement of pieces of paper he has cut from glossy magazines.

"Cognitive Science," a collage with acrylic from 2019, looks as if it were created in part from items cut from a children's book as a woman looks past the viewer and is surrounded by a dinosaur, a chameleon, penguins, dolphins and other creatures while a cartoon Dracula lurks behind her. The effect is both playful and sinister.

Chaney Jewell is the curator of collections and exhibitions at the center.

"His collages are beautiful and imaginative," she says. "There's almost this alternate universe he has created."

Colburn's work is special, Jewell says, "because not only does he have a lot of diversity in his style — ranging from monotone to really bright, vivid pieces — but also because he was limited to the materials that were available to him when he started making art. I think he is a great example of fine art being created with typically not fine material." 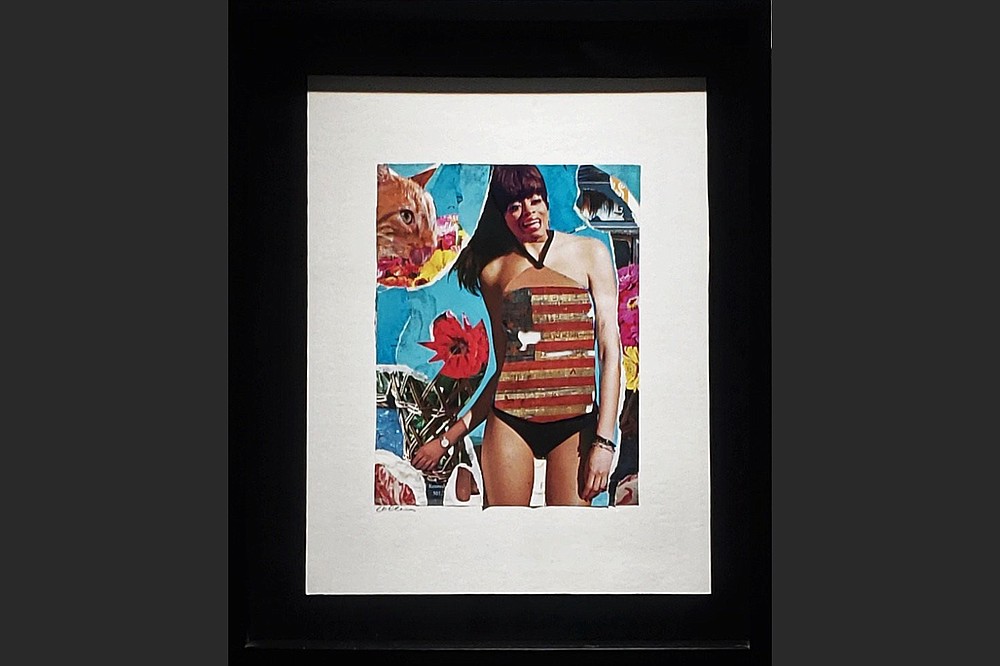 “Portrait of Diana Ross,” paper collage, 2014, is part of “1989-2021: A Retrospective of Jerry Colburn." (Special to the Democrat-Gazette/Jerry Colburn, Arts & Science Center for Southeast Arkansas)

On a stormy afternoon earlier this month, Colburn is at his kitchen table, a stack of recently acquired fashion magazines nearby that will be used to make art.

His home is filled with his creations; canvases and papers are stacked all around and propped against walls along the floor.

"About once a week I'll be asleep and I'll hear a [crash sound], and a pile [of artwork] has fallen," he says with a smile.

Colburn grew up in North Little Rock and had a compulsion to create from a young age.

"That's the reason I believe in reincarnation," he says. "I came into this world with a very strong artistic impulse. Nobody in my family had any interest in art, none of my friends. Where did it come from? My theory is that I've been an artist for many lifetimes and this is just another one."

He collected comic books, which was his first introduction to art and remain an influence on his colorful canvases and collages.

As a teenager Colburn knew about Picasso and the abstract expressionist movement was just taking off, but he still thought the road to art-making traveled through realism.

"I tried to do realism because that's what I thought you had to do to be an artist," he says. "I found out pretty fast that I didn't have a knack for realism, and I still don't."

So he gave up on art for a few decades.

"I didn't do it for a long time, but I never lost interest," he says. 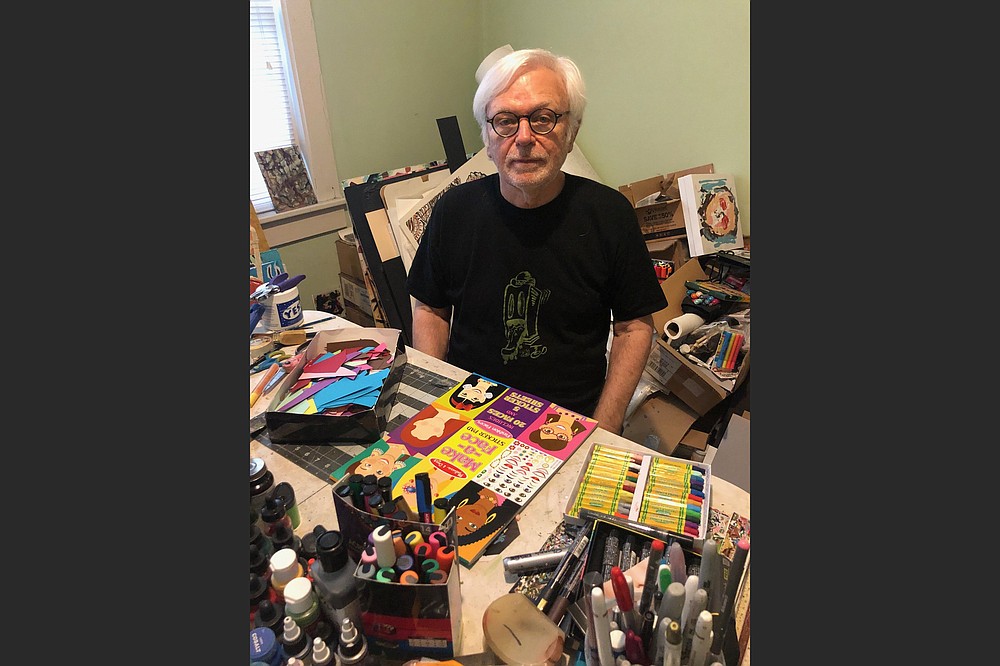 By the late '80s he'd been through a divorce and "was broke, but I had a lot of free time." So he set about trying to make art.

He discovered a photo printing shop called Color Print on Wright Avenue in Little Rock. Behind the store was a pair of dumpsters where unusable prints were tossed.

His first photo collages were created from these rejects. Inspired by Romare Bearden, the North Carolina-born visual artist, author and songwriter who started doing collage in the mid-'60s, Colburn would cut the pictures up and reassemble them into different images.

He'd taken an art history class as a freshman at the University of Arkansas, Fayetteville, and a life-drawing course at the Arkansas Arts Center under Kevin Kresse, but that was the extent of his formal training.

By the early '90s he was drawing and painting, sometimes on his collages.

"I started loosening up," he says. "I just got looser and looser."

Before retiring in 2008, Colburn worked in the Disability Determination for Social Security Administration office, making art when he wasn't on the clock.

"I was with the state for 31 years," he says. "The days were theirs and the nights were mine." 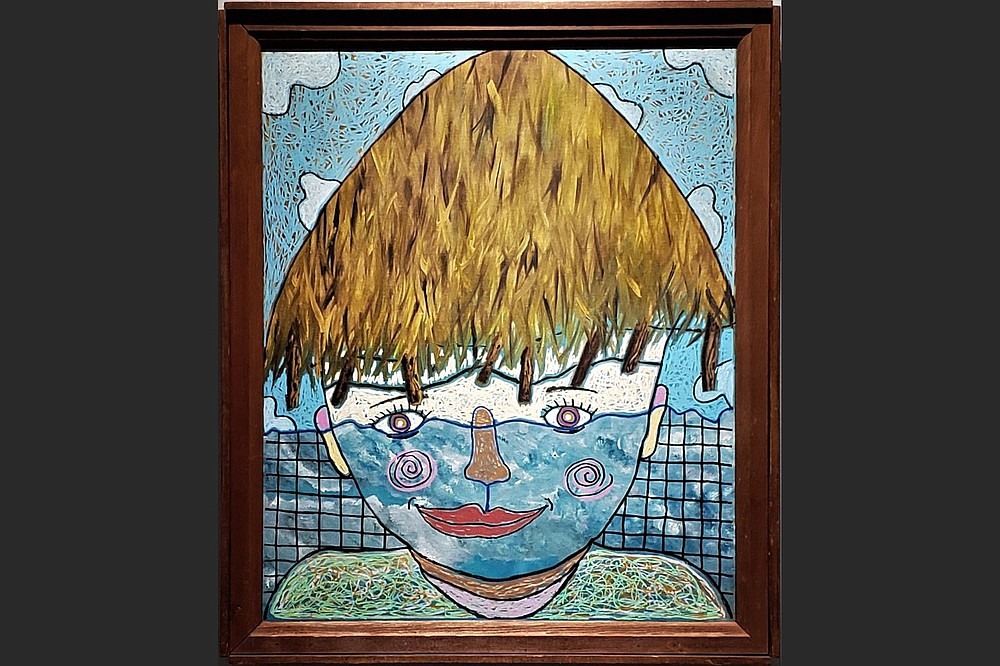 “Blue Boy,” acrylic on existing painting, is part of the works included in “1989-2021: A Retrospective of Jerry Colburn.” (Special to the Democrat-Gazette/Jerry Colburn, Arts & Science Center for Southeast Arkansas)

Among the pieces in the retrospective show are three whimsical acrylic paintings — "Blue Boy," "Albert Lambeaux" and "Ghost of the Lighthouse," all from 2019 — Colburn made over existing paintings. He bought the originals in thrift stores and repurposed them into his own creations.

"Those are what I like to call thrift store modifications," he says. "I got the idea from [Danish painter] Asger Jorn. He was part of the CoBrA group in Europe in the late '40s and '50s. He used magazine images or cheap prints and painted over them or collaged on them. I'm a fan of his work and it ties into what I do."

He also paints over frames, as with "Tulip Lady," another piece in the show that from a distance looks almost like stained glass.

Colburn's work is often some form of abstract figuration.

"I always liked that tightrope between pure abstraction and literal representation, that area right in the middle, because it doesn't say 'this is the Eiffel Tower or this is the Brooklyn Bridge'; it just hints that maybe this is a bridge, maybe these are some people. I give people who look at the paintings or the collages just enough information so they can finish the story."

There are several paintings in the exhibit, including the swirly acrylic on canvas "Proto Flesh" from 1998 and the near-psychedelic "Flaming Orange Delight," a 2004 work in gouache (a method of painting).

Speaking about the paintings, Jewell says she admires "the way he situates color with a negative space around it and highlights and shadows is really dynamic." 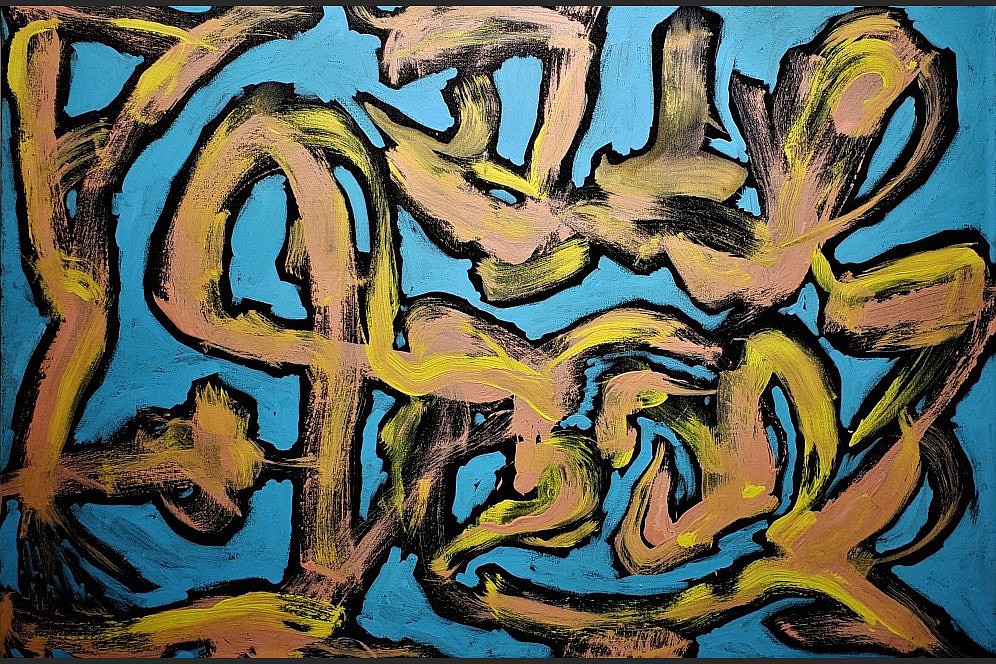 Colburn is a bit more critical.

"I don't really think of myself as a painter," he says, but adds that one of his favorite pieces in the show is "The Living Room," a swirly, almost marble-like ink painting from 2002. "I think it's the best painting I've done."

Another favorite is "Uh Oh, Dad Made A Joke," a small paper collage that uses old black-and-white photos of him and his son, Jeremy.

Colburn is also a musician. He played drums in the Bloodless Cooties, a garage rock band, with Jeremy on guitar and their friend, bassist Louisa Rook. He composes electronic loop recordings, which have been collected on the CDs "On Fire" from 2006 and "Smell the Love" from 2005 (Jeremy contributed artwork to both). His electronic compositions play in the background at the exhibit.

Despite his output, range and being the subject of a retrospective show, Colburn maintains a sense of wonder and humility when it comes to his art.

"I still don't know what I'm doing," he says. "I really, really didn't know what I was doing in 1989. I was just trying to make something that looked OK, that people wouldn't make fun of."