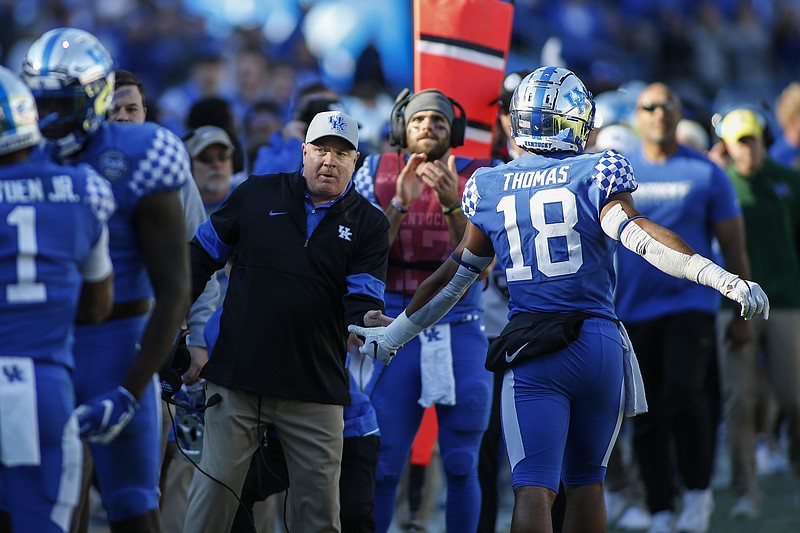 HOOVER, Ala. -- Kentucky football has not been super flashy for the past decade, but the respect it has generated in SEC circles under Coach Mark Stoops at the basketball-crazy school is real.

The Wildcats lost a load of talent off a 5-6 team, including quarterback Terry Wilson, and league media still saw fit to project a third-place finish in the SEC East this fall behind only division powers Georgia and Florida.

Kentucky has gone to five consecutive bowl games under Stoops, who has a 49-50 record through eight seasons with the Wildcats.

Stoops, who is second in tenure at his school in the SEC behind only Alabama's Nick Saban, did not duck from the fact that 2020 was hard on the Wildcats, who lost offensive line coach John Schlarman, 45, after a two-year battle with bile duct cancer during the season while struggling through the coronavirus pandemic with everyone else.

"Nine years being here, very changing, difficult times," Stoops said. "But a year ago for the University of Kentucky was very, very tough.

"We had some injuries. ... The loss of Coach Schlarman, you know, it's something that really shook our program."

Wilson's departure as a grad transfer to New Mexico opened the door for Joey Gatewood to land his first starting job after playing behind Bo Nix at Auburn in 2019.

The 6-5 Gatewood completed 17 of 35 passes for 109 yards in limited duty behind Wilson, but his dual-threat ability should be an asset under first-year coordinator Liam Coen.

Stoops, whose offense has finished last in passing in the SEC the past three years, recognized the offense needed a jolt. He hopes to have caught the next up-and-coming young offensive mind in Coen, 35, who had been assistant wide receivers coach with the Los Angeles Rams in 2018-19 before moving to assistant quarterbacks coach last year under Sean McVay.

A story in The Athletic dared to compare Coen with former LSU co-offensive coordinator Joe Brady, another 30-something whose innovations in 2019 helped power the Tigers to school-record offensive production and the College Football Playoff national title.

"I really like the changes that I made in the coaching staff," Stoops said. "I needed to. Offensive coordinator Liam Coen coming in from the Rams and hopefully continuing to push us forward and to give us the balance that I'm searching for.

"I felt like this spring we got the ball down the field better than we have in years, so I feel very good about it."

Coen seems to be part of a trend toward younger coaches getting earlier shots at coordinator jobs.

"Great guy, great energy," standout left tackle Darian Kinnard said of Coen. "He's been doing it in the NFL, so I feel like we just have to trust in him and continue working.

"One of the biggest things he wants is just pinpoint accuracy with everything we're doing. Everything has a purpose and a reason, and it sets up a lot of stuff for a lot of the game."

"Chris Rodriguez needs to touch the ball as many times as possible," Coen told Athlon Sports.

The Wildcats also got a potential impact transfer in Wan'Dale Robinson, a former Kentucky Mr. Football who was a Paul Hornung Award finalist at Nebraska in 2019. Perhaps he can fill the kind of versatile role Lynn Bowden held in 2018-19.

Kinnard said Gatewood is hungry to make his mark.

"What I've seen from Joey, he's a huge competitor," Kinnard said. "He loves to battle. He loves to go out there and work hard and show what he's got every day.

"Me personally, I love his arm. He has a great arm, and he knows when to tuck it and run."

Third-year coordinator Brad White was joined by former Wildcat linebacker Jon Sumrall as a co-coordinator this winter after serving as inside linebackers coach.

Paschal, who has overcome melanoma, said a good group of seniors has provided quality leadership on defense.

"Something I've seen throughout this offseason is the leadership of Yusuf Corker and DeAndre Square, Marquan McCall and myself, just being able to lead this defense from all three levels, from the linebacker position to the defensive backs to the defensive line," Paschal said. "We're just thankful to have the opportunity."

Paschal thinks the Wildcats have the pieces to contend in the East.

"We have the players, we have the talent, and now we just have to execute our goals and execute what we have to do," Paschal said.

The schedule is conducive to a good start. The Wildcats play just one game away from Lexington, Ky. -- at South Carolina on Sept. 25 -- through Oct. 9. A key indicator to Kentucky's direction is likely to come in early October in back-to-back home games against Florida and LSU, followed by a road trip to Georgia.

Eighth in a series previewing SEC football in 2021.