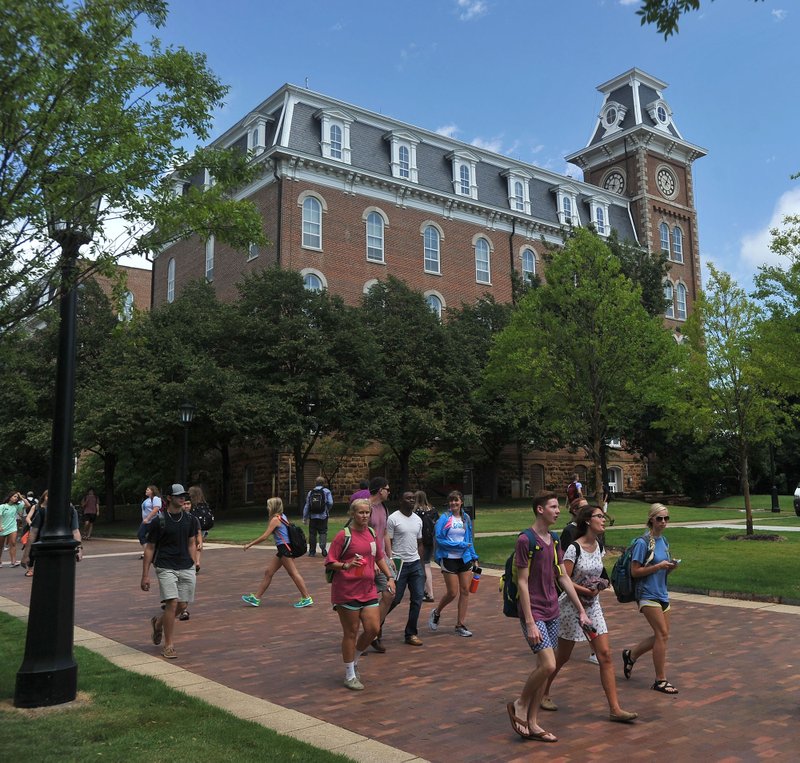 University of Arkansas students walk past Old Main Sept. 3, 2014 on in Fayetteville.

FAYETTEVILLE -- The UA-Fayetteville Education Association/Local 965 union is calling for the university to join or at least file a court document in support of a Rogers attorney's promised lawsuit challenging the state's new anti-masking law.

In a statement Monday, the Local 965 union -- which represents a small fraction of University of Arkansas, Fayetteville workers -- also pledged to support any of the group's members who might post signs or otherwise require masks in their offices or classrooms.

"A faculty member when presiding in a classroom should have the liberty to bar the unmasked," the group said in a statement.

The group has 54 members among UA faculty and staff, said Ben Pollock, the group's secretary.

Tom Mars, a Rogers attorney, has stated on social media that he plans to file a lawsuit on behalf of K-12 parents challenging the state law. It's unclear if educational entities might join in such a lawsuit. Discussion about the lawsuit will be on the agenda at the next Fayetteville School District school board meeting Thursday, a district spokesman said.

"The 965 board recommends that the UA administration join the lawsuit either as co-plaintiff or through an amicus curiae, friend of the court brief, on behalf of its workers and students," the group's statement said.

The Local 965 also called for the university to "more aggressively" encourage covid-19 vaccinations and mask wearing on campus.

A UA spokesman did not respond Monday to a request for comment.