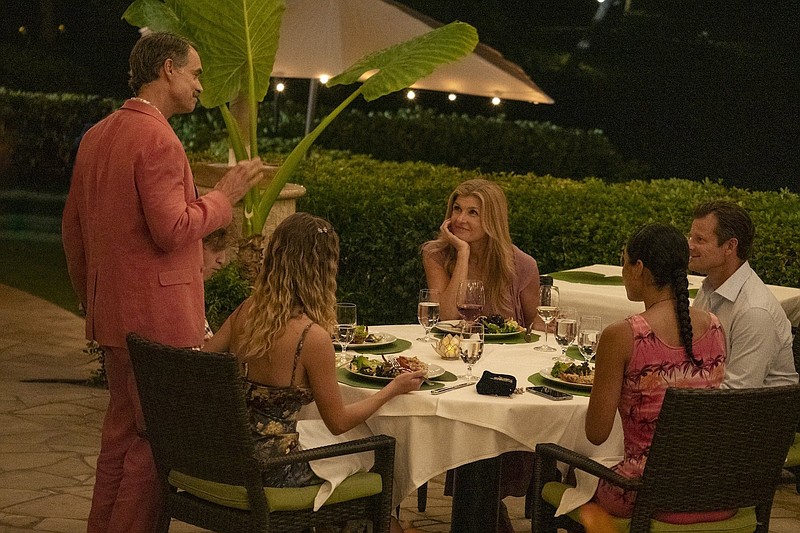 From the Lannisters to the Roys, rich people behaving badly is a sweet spot for HBO. In the satirical limited series "The White Lotus," that tradition is extended to an exclusive Hawaiian resort where a group of wealthy guests with ample baggage has turned paradise into a living hell, both for themselves and for the staff tasked with serving them.

The self-centered tourists include the dysfunctional Mossbacher family, led by tech mogul mom Nicole (Connie Britton). She's flanked by her powerless husband, Mark (Steve Zahn), aimless teen son Quinn (Fred Hechinger), sneering college student daughter Olivia (Sydney Sweeney) and Olivia's conflicted bestie, Paula (Brittany O'Grady). Arriving on the same boat are honeymooners Rachel (Alexandra Daddario) and Shane Patton (Jake Lacy), whose marriage — he's a demanding rich boy in want of a trophy wife, she's a middle-class journalist who still has career ambitions — is already showing signs of strain. Emotionally needy guest Tanya McQuoid (Jennifer Coolidge) is there to spread the ashes of her late mother, but so far she has spent her trip in the bar or the spa.

But fun as it may be watching the wealthy eat themselves alive, the critique of privilege embedded in "The White Lotus" suffers from the same blind spots toward the staff that its affluent characters have. The series would benefit from spending more quality time with the hotel workers, rather than making their storylines secondary. As it stands, the narrative is mostly stuffed inside the rooms of and around the dining tables with the moneyed mainlanders, mining the irony of claustrophobia with an ocean view.

These visitors are the invaders. The staff members are their unfortunate subjects. And colonization is a theme flicked at — though never fully developed — throughout the six-part series created, written and directed by Mike White, including Native Hawaiians' economic and social inequality and the tourism industry's appropriation and destruction of native culture. For instance, we learn that Kai's family is fighting for hereditary rights to the land the hotel was built on and that he's working for the enemy because there are no other jobs around. But his plight is used primarily as a device to reflect the depravity of the Mossbachers. Other nods to the subject include brief glimpses of Olivia and Paula's very "liberal arts" reading, including Aime Cesaire's "Discourse on Colonialism."

But most of the series' time is spent mining the power differentials among the (largely white) elite, from sparring spouses and squabbling siblings to rivalrous besties. "The White Lotus" is so focused on the selfish usurpers and every absurd detail of their horribleness that it too ignores "the help" until they're needed to juice up the plot.

After all, the series opens with an employee, Lani (Jolene Purdy) who, her first day on the job, goes into labor in the hotel lobby. She hasn't disclosed she's pregnant because she needs the work. And though she starts her labor in Armond's office, the plot point is never resolved; we never revisit what happened to her. No one seems to care. Later, Armond is bothered that he didn't notice she was pregnant, but only insofar as it relates to how much the job has worn him down — a realization that precipitates a cartoonish spiral throughout the rest of the series.

Other bouts of muted consciousness happen among the guests: navel-gazing conversations about their own self-worth by the pool, the meaning of social justice while sipping tropical drinks on the patio, the evils of colonization from the cushy white sheets of the hotel room. The mocking humor has its moments and certainly highlights the obliviousness of the well-off. But it's defanged by the realization that "The White Lotus" is still a story that centers on the colonizers.

Even the smarmy, faux-cordial Armond, the staff member with whom we spend the most time, turns into an exaggerated mess of a character — a recovering addict who falls off the wagon and ends up sexually harassing a young male colleague. (It doesn't help that he's derailed by a bizarrely old-fashioned subplot involving Mark, who tumbles into a personal crisis when he learns that someone close to him was gay. It feels like a storyline from a bygone era of gay representation on TV.)

Perhaps it's telling that the best parts of "The White Lotus" are its soundtrack and title credits. The music is an original score by Chilean-born Canadian composer Juan Cristobal Tapia de Veer. It's an instrumental mix of Polynesian percussion and Latin melodies, punctuated by vocal intonations. The title credits combine the music with a pastiche of vintage, tropical-theme wallpaper. But look closely: There's peril beyond the palm-treed bliss.

If only the series' narrative did the same with its references to colonialism and its characterization of the staff. That might have made "The White Lotus" more than another moneyed-idiots-gone-mad crowd pleaser.