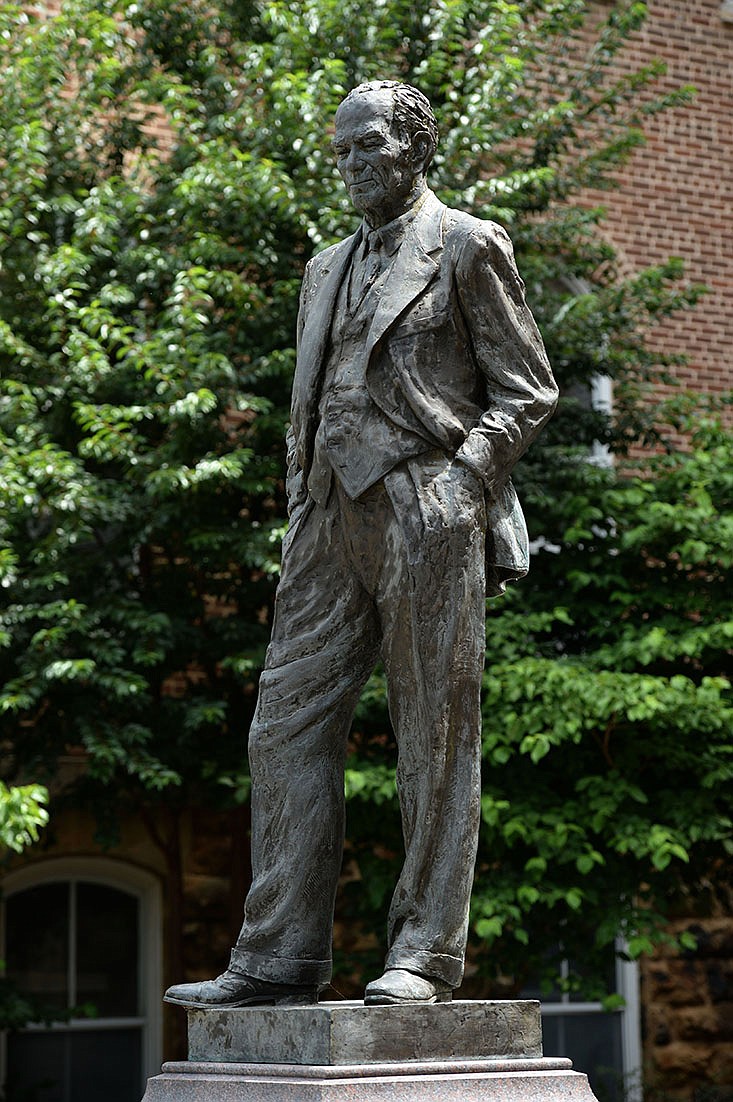 J. William Fulbright’s statue stands near the west entrance of Old Main on the University of Arkansas campus in Fayetteville. The UA Board of Trustees will vote today on whether the statue will remain but added context “that presents the full legacy” of Fulbright. (NWA Democrat-Gazette/Andy Shupe)

University of Arkansas System President Donald Bobbitt has recommended adding context to a statue of former U.S. Sen. J. William Fulbright "in a way that presents the full legacy" of Fulbright while keeping the statue in its current location on the Fayetteville campus.

Bobbitt's recommendation and a trustees board vote expected today will cap a contentious racial reckoning begun a year ago over Fulbright's civil-rights record, a process that included an April campus committee's vote to remove his bronze likeness and strip the Fulbright name from UA's Arts and Sciences College.

The University of Arkansas System board of trustees will consider today a resolution affirming the use of the Fulbright name for the Arts and Sciences College, as well as keeping the statue of the longtime senator in its place in a rear courtyard outside the Old Main academic building.

The proposed resolution is similar to a May recommendation by Joe Steinmetz, at the time the Fayetteville campus top administrator, but differs in that Steinmetz, in a letter to Bobbitt, called for the Fulbright statue to be moved to a different part of campus.

To what degree is unclear, but board documents reflect the influence of a new state law prohibiting the removal or relocation of public monuments without a waiver from the Arkansas History Commission.

While the law creates an avenue to petition for removal or relocation of a public monument, some state lawmakers last month in a committee hearing told Bobbitt and Steinmetz that they opposed any change. Several denounced "cancel culture," and Sen. Mark Johnson, R-Little Rock, said no waiver would be granted should there be a request to move the Fulbright statue.

The state History Commission has seven board members who are appointed by the governor.

Bobbitt, in his letter to trustees giving his recommendation, noted the waiver process while also describing a lack of a path forward for relocating the statue.

"My review of the [Steinmetz] letter and discussions with stakeholders have led me to agree with the recommendation to retain the name of Fulbright College and agree with the need to contextualize the Fulbright statue in a way that presents the full legacy of Senator Fulbright. However, since Act 1003 of 2021 prevents removing or relocating monuments on public property absent receipt of a waiver from the Arkansas History Commission, I believe the statue should be contextualized in its current location," Bobbitt wrote.

He added: "If a path presents itself at a later time to consider the relocation of the statue that is consistent with state law, the Board can revisit this issue."

Bobbitt did not respond to a question submitted Tuesday through a UA System spokesman, Nate Hinkel, about whether his recommendation would have been any different without the law in place.

The formal resolution to be considered by the trustees states, in part, that the board "acknowledges the passage of Act 1003, which prohibits the removal or relocation of monuments on public property, and directs that the J. William Fulbright statue remain in its current location and that the University add contextualization to the statue that affirms the University's commitment to racial equality and acknowledges Senator Fulbright's complex legacy, including his record on international affairs, Civil Rights legislation, and racial integration."

Fulbright represented Arkansas in the U.S. Senate for 30 years. He is perhaps best known today for introducing legislation in 1945 that created the international educational exchange program named after him.

He also signed what was known as the Southern Manifesto, an effort by Southern congressmen and senators to obstruct school integration that had been ordered by the U.S. Supreme Court. The court had ruled in Brown v. Board of Education of Topeka against racial segregation of public schools.

Fulbright -- a UA graduate who at age 34 was president of the University of Arkansas -- in the 1960s also participated in a filibuster against civil rights legislation. Fulbright, a Democrat, died in 1995.

Black student leaders last year called for removal of the Fulbright statue, and a campus committee convened under then-Chancellor Steinmetz by a vote of 15-1, with three absent, voted to remove the statue of Fulbright from campus. The group voted 11-5, with three members absent, to remove Fulbright's name from the Arts and Sciences College.

The committee consisted of faculty members, staff members, students and alumni. The group met virtually over a period of nine months beginning last August, hearing from historians, biographers and others, according to university records.

Bobbitt also recommended that trustees approve a resolution to remove the name of former Arkansas Gov. Charles Brough from a campus dining hall.

The campus committee that reviewed Fulbright's legacy also considered Brough and the former governor's role in the Elaine Massacre.

Both the UA campus committee and Steinmetz in his letter to Bobbitt had also recommended the removal of the Brough name from the dining hall.

Bobbitt's letter to trustees states that there was a "limited connection" between Brough and the university. The board resolution to change the dining facility name states that it dates back to 1958, and that Brough once held a professorship at the university.

The UA campus committee's recommendation from April concluded that Brough "blamed Black people for the violence, and empowered those who oversaw the unjust judicial process that sent scores of Black men to prison and condemned twelve men to death."