In U-turn, CDC tells vaccinated to mask up

Indoor guidance made for surge-hit regions by Compiled Democrat-Gazette Staff From Wire Reports | July 28, 2021 at 7:24 a.m. 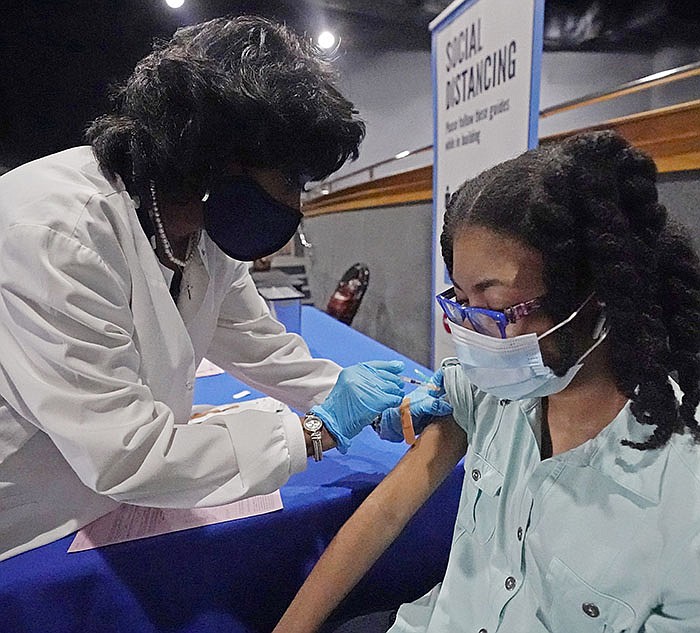 Jackson-Hinds Comprehensive Health Center nurse Maggie Bass gives Ayana Campbell, 14, a shot of the Pfizer vaccine Tuesday at Jackson State University in Jackson, Miss., at a clinic sponsored by the university and the medical center. Vaccines remain remarkably effective against the worst effects of and strain of the coronavirus, officials say. (AP/Rogelio V. Solis)

Revising a decision made just two months ago, the Centers for Disease Control and Prevention said Tuesday that people vaccinated against the coronavirus should resume wearing masks in public indoor spaces in parts of the country where the virus is surging.

The move comes as President Joe Biden says that a plan is being considered to make vaccines mandatory for the federal workforce. White House officials said they would reveal more about the president's plans later this week.

CDC officials also recommended universal masking for teachers, staff, students and visitors in schools, regardless of vaccination status and community transmission of the virus. With additional precautions, schools nonetheless should return to in-person learning in the fall, according to agency officials.

The guidance on masks in indoor public places applies in parts of the U.S. with at least 50 new cases per 100,000 people in the past week. That includes 60% of U.S. counties, officials said. New case rates are particularly high in the South and Southwest, according to a CDC tracker. In Arkansas, Louisiana and Florida, every county has a high transmission rate.

The new CDC recommendations are another baleful twist in the course of America's pandemic, a war-weary concession that the virus is outstripping vaccination efforts. The agency's move comes after rising case counts as well as growing reports of breakthrough infections of the more contagious delta variant among people who are fully immunized.

"The delta variant is showing every day its willingness to outsmart us," Dr. Rochelle Walensky, director of the CDC, said at a news briefing Tuesday.

Data from several states and other countries shows that the variant behaves differently from previous versions of the coronavirus. The game-changer for the agency was data showing that vaccinated people infected with the highly infectious delta variant carry the same viral load as unvaccinated people who are infected.

"This new science is worrisome and unfortunately warrants an update to our recommendation," Walensky said.

But whether state and local health officials are willing to follow the agency's guidance is far from certain. And there is sure to be resistance from pandemic-fatigued Americans, particularly in regions of the country where vaccination rates are low and concerns about the virus are muted.

Some jurisdictions, like Los Angeles County and St. Louis County, Mo., have already reinstated mask mandates in response to rising cases. But Arkansas, one of the states with the highest numbers, has retained a ban on mask mandates even as vaccination rates lag.

Meanwhile, Florida Gov. Ron DeSantis held a closed meeting in the state Capitol on Monday with medical professionals, underlining his opposition to mask mandates for students. DeSantis has said he fears efforts at the federal or local level to impose a mask mandate for K-12 school students and said he would call a special session of the Legislature to prevent that from happening.

But some public health experts have welcomed the CDC's decision to revise its guidelines. Based on what scientists are learning about the delta variant's ability to cause breakthrough infections, "this is a move in the right direction," said Dr. Celine Gounder, an infectious disease specialist at Bellevue Hospital Center in New York.

Walensky maintained that it is rare that a vaccinated person can become infected with the delta variant and possibly contagious, but the CDC is tracking only breakthrough infections that lead to hospitalization or death among vaccinated Americans. Officials have previously said that vaccinated people account for just 3% of hospitalizations.

Biden said Tuesday that a vaccine mandate for all federal workers is under consideration, but did not provide details.

He said he would deliver a speech Thursday about "the next steps in our effort to get more Americans vaccinated."

Officials said there was no consideration of simply firing employees who refuse to get vaccinated, but that the government could add additional burdens or restrictions on those who do not get the protections in an effort to persuade more people to get the shot. They said there is evidence that making life inconvenient for those who refuse the vaccine works reasonably well at increasing vaccination rates.

The vaccines remain remarkably effective against the worst outcomes of infection with any form of the coronavirus, including hospitalization and death. But the new guidelines explicitly apply to both the unvaccinated and vaccinated, a sharp departure from the agency's position since May that vaccinated people do not need to wear masks in most indoor spaces.

Those recommendations, which seemed to signal a winding down of the pandemic, were based on earlier data suggesting that vaccinated people rarely become infected and almost never transmit the virus, making masking unnecessary.

Some public health experts said they thought the earlier CDC decision to no longer recommend mask wearing for vaccinated people was based on good science. But those experts were also critical, noting that there was no call for Americans to document their vaccination status, which created an honor system. Unvaccinated people who did not want to wear masks in the first place saw it as an opportunity to do what they wanted, they said.

But that was before the arrival of the delta variant, which now accounts for the bulk of infections in the United States.

The delta variant is thought to be about twice as contagious as the original version of the virus. Some research now suggests that people infected with the variant carry about a thousandfold more virus than those infected with other variants and may stay infected for longer.

"If all the unvaccinated people were responsible and wore mask indoors, we would not be seeing this surge," said Dr. Ali Khan, a former CDC disease investigator who now is dean of the University of Nebraska's College of Public Health.

"It was completely foreseeable that when [the CDC] made their announcement, masking would no longer be the norm, and that's exactly what's happened," Gostin said.

The CDC may be seen as "flip-flopping," he said, because there's been no widely recognized change in the science, he said. Furthermore, it's not likely to change the behavior of the people who most need to wear masks.

"I don't think you can effectively walk that back," he said.

"The virus is changing; we are dealing with a dynamic situation," he said, adding the CDC is correct to revisit its recommendations as the virus evolves, he said.

Jen Psaki, the White House press secretary, said at a news conference Tuesday that changing the guidance was crucial to "battling an ever-evolving virus" and that the Biden administration supported the effort.

"Their job is to look at evolving information, evolving data, an evolving historic pandemic, and provide guidance to the American public," Psaki said.

Biden dismissed concerns that the new masking guidance could invite confusion, saying Americans who remain unvaccinated are the ones who are "sowing enormous confusion."

The CDC's move to recommend masks brings the U.S. back in line with policies urged by The World Health Organization. Many governments recommend some form of masking, with only a few outliers in the West, including Sweden and Hungary.

But the U.S. is not the only country to lift then reinstate mask guidance. In Israel, an indoor mask mandate was lifted on June 15 to be reimposed on June 25 as cases surged.

In South Korea, one of the first East Asian countries to chart a path out of the pandemic, the government announced in June that partially inoculated residents would soon be allowed to go mask-free outdoors.

But before the newly relaxed rules could go in place, the South Korean government canceled them in Seoul and neighboring regions, ordering even fully vaccinated residents to wear masks inside and outside.

In other nations such as France and Australia, regional rules on mask-wearing have returned this summer.

"Masking remains one of the most effective, safe and low-cost nonpharmaceutical interventions to reduce transmission," said Sunny Wong, an associate professor at the Chinese University of Hong Kong.

Hong Kong, which is recording only a few new cases a day and has fully vaccinated roughly 30% of the population, is keeping masking recommendations in place, he noted.

Wong was lead author on a study released in June 2020 finding places that had adopted mask-wearing early in the pandemic, such as Hong Kong and Taiwan, by that point at least had milder outbreaks than others.

It was "reasonable" for governments to relax mask mandates earlier this year if they had high vaccination rates, Wong said, but only if there was low community transmission as well. "Otherwise masks should remain a wise precaution, regardless of vaccination status," he said.

The warnings came as the White House also said it had no plans to lift broad restrictions on visitors from Britain, Europe's Schengen region and other nations such as Brazil, China, India and South Africa.

"Given where we are today ... with the delta variant, we will maintain existing travel restrictions at this point," Psaki said Monday.

The U.S. government, as it raised its travel advisories to the highest levels for Cyprus, Portugal and Spain, strongly urged U.S. residents to avoid all travel there even if fully vaccinated. Similar warnings were issued for travel to Britain last week, as new cases soared and the government there scrapped nearly all public health restrictions.

For Israel, the West Bank and Gaza, the CDC issued a slightly less severe Level 3 notice, "indicating a high level of COVID-19 in the country" and urged unvaccinated to "avoid nonessential travel to Israel."

Information for this article was contributed by Apoorva Mandavilli and Michael D. Shear of The New York Times; by Mike Stobbe, Aamer Madhani and Alexandra Jaffe and Heather Hollingsworth of The Associated Press; by Gray Rohrer of the Orlando Sentinel (TNS); and by Adam Taylor and Erin Cunningham of The Washington Post.

Print Headline: In U-turn, CDC tells vaccinated to mask up