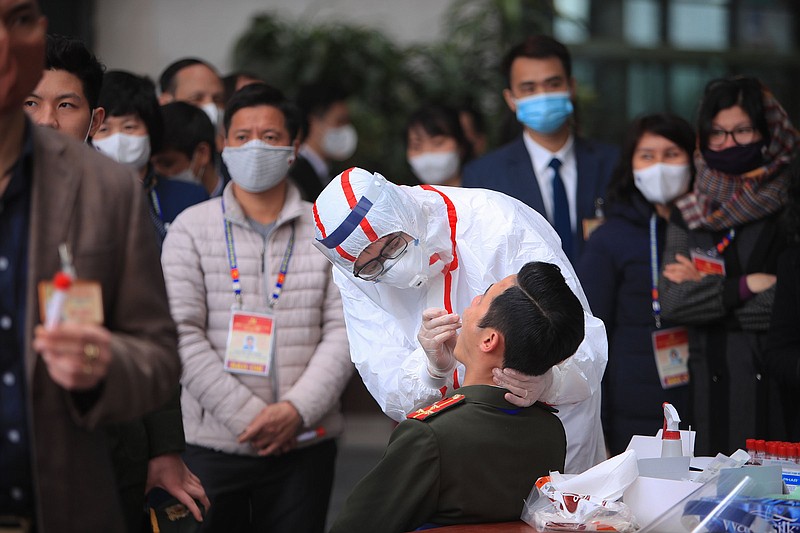 A health worker takes swab samples of a security officer to test for COVID-19 at the venue of Vietnam Communist Party congress in Hanoi, Vietnam, Friday, Jan. 29, 2021. Vietnam locked down a company and several communities to curb the coronavirus spread. (AP Photo/Hau Dinh)

Fresh coronavirus outbreaks are forcing factory shutdowns in countries such as Vietnam and Bangladesh, aggravating supply chain disruptions that threaten to leave some U.S. retailers with empty shelves as consumers begin their back-to-school shopping.

The overseas work stoppages are just the latest twist in almost 18 months of pandemic-related manufacturing and transportation woes. The new infections come as two of the largest U.S. railroads last week restricted shipments from West Coast seaports to Chicago, where a surge of shipping containers has clogged rail yards.

Supply headaches stretching from Asian factory towns to the American Midwest are intensifying as the economic recovery tries to outrun the highly infectious delta variant. Aftershocks from earlier limits on a major Chinese port after a surge of covid-19 cases are expected later this month to worsen backlogs at U.S. West Coast facilities.

Chronic shipping delays also are feeding inflation, just as consumers prepare to stock up for the coming school year. Spot shortages of clothing and footwear could appear within weeks, and popular toys may be scarce during the holiday season. Even as the U.S. economy is predicted to enjoy its fastest growth since 1984, supply lines now are expected to remain snarled through the first half of next year or longer, according to corporate executives.

"Whatever the new normal is, it will happen a lot later than people assume," Marc Bitzer, chief executive of Whirlpool, told analysts Thursday. "Everybody hopes for [the] new normal to be next quarter. It's not going to be."

White House economists say interruptions in the supply of semiconductors and home building materials are contributing to the highest inflation in 13 years. The president earlier this month signed an executive order designed to increase competition and lower prices in the shipping and freight rail markets, but any effects will be felt only in the long run.

Corporations such as Levi Strauss, Harley-Davidson and Unilever are among those rewiring their supply lines or raising prices to offset higher input costs.

But the Biden administration has parried industry calls to help companies financially by eliminating import tariffs on Chinese products or to use the National Guard to physically clear the cargo jam.

The interruption of Chinese manufacturing at the pandemic's outset toppled the first of several dominoes leading to today's global supply chain pileup. While Chinese factories quickly returned to normal operations, an unexpected increase in American demand for goods during the work-from-home era discombobulated traditional trade patterns.

As a result, ocean-spanning supply chains, the distinguishing characteristic of the age of globalization, are failing at multiple points.

The massive cargo carriers that arrive off the coast of Southern California, some bearing more than 15,000 metal shipping containers, often must wait at anchor for days before disgorging their cargo.

Once on land, containers frequently idle in temporary storage while awaiting space on an outbound truck or train, incurring additional costs.

Inland rail yards have emerged as the latest pain point for companies trying to move goods internationally. Trains full of clothing, computers, furniture and appliances have been streaming for months into Midwestern hubs.

When the system works as designed, containers are lifted from arriving trains and placed directly onto a wheeled chassis, which is then hauled away by a local driver. The container is quickly unloaded by the final customer and returned to the rail yard.

But this year's flood of cargo has overwhelmed the system, leaving the yards without enough chassis. So containers have piled up by the thousands.

Rather than a single movement from train to truck, containers now are lifted off, placed in storage and then moved a second or even third time before eventually exiting the yard, according to Lawrence Gross, a transportation consultant in Durango, Colo.

"Once you fall behind, it's really hard to dig your way out," Gross said. "The system has gotten out of whack."

Union Pacific, the nation's largest publicly traded railroad, halted all eastbound traffic from the ports of Los Angeles, Long Beach, Oakland and Tacoma, starting July 19, for at least one week. BNSF Railway, which boasts one of North America's largest freight rail networks, said it was reducing the flow of containers from Los Angeles and Long Beach for two weeks in what it called "a somewhat unprecedented" move.

Both railroads have made more room for containers that are awaiting pickup. Union Pacific reopened a terminal in Rochelle, Ill., that it closed two years ago. BNSF paved over two tracks to create space at a 638-acre facility in Chicago it calls the nation's largest inland port.

"Nobody can get anything," he said. "Do your Christmas shopping now."