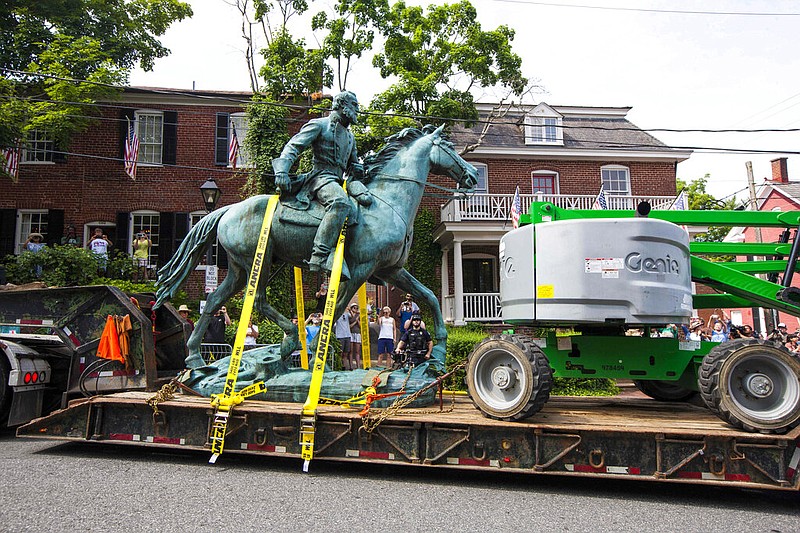 The monument of Stonewall Jackson is hauled away on Saturday, July 10, 2021 in Charlottesville, Va. (AP/John C. Clark)

HOT SPRINGS -- The superintendent of Hot Springs National Park says it has "no intention" of acquiring statues of Confederate generals removed from downtown parks in Charlottesville, Va.

The Associated Press reported Tuesday, citing city documents, that at least 13 organizations and one municipality, including Hot Springs National Park, have expressed interest in acquiring two statues of Confederate generals removed from downtown parks in Charlottesville, including one monument that was the focus of a violent white nationalist rally in 2017.

"This is the first I've heard of this," Hot Springs National Park Superintendent Laura Miller said Tuesday in an email to The Sentinel-Record.

"I'm not sure where it's coming from, but we have no intention of acquiring statues for Hot Springs National Park."

In a later statement, Miller said the National Park Service "has not requested, nor expressed interest in acquiring, any statues for display at Hot Springs National Park."

According to The Associated Press, museums, battlefields and historical sites in Virginia and beyond expressed interest in the statues of Gen. Robert E. Lee and Gen. Thomas "Stonewall" Jackson that were removed earlier this month, according to documents acquired by The Daily Progress. The city also received at least 18 expressions of interest from private citizens across the country.

The AP reported that the Jefferson School African American Heritage Center is the only Charlottesville-area entity that expressed interest. LAXART, an art museum in Los Angeles, also expressed interest and submitted a proposal to include the statues as the centerpiece of an upcoming exhibit featuring decommissioned Confederate monuments alongside contemporary art.

The town of Goshen, Va., asked to acquire the statues for free to place in front of its newly constructed community center to attract tourists.

The Charlottesville City Council still has not decided whether ownership of the statues should be transferred to a museum or other entity or whether the statues should be demolished. The city said July 13 that it would continue to accept statements of interest from entities interested in acquiring them.

In early September, the mayor will conduct outreach with the interested parties to further evaluate their interest and resources.

White supremacist and neo-Nazi organizers of the August 2017 "Unite the Right" rally in Charlottesville said they went to the city to defend the statue of Lee. They clashed with counterprotesters before a white supremacist plowed his car into a crowd of people, killing 32-year-old Heather Heyer.

Print Headline: No statues on the way, park says