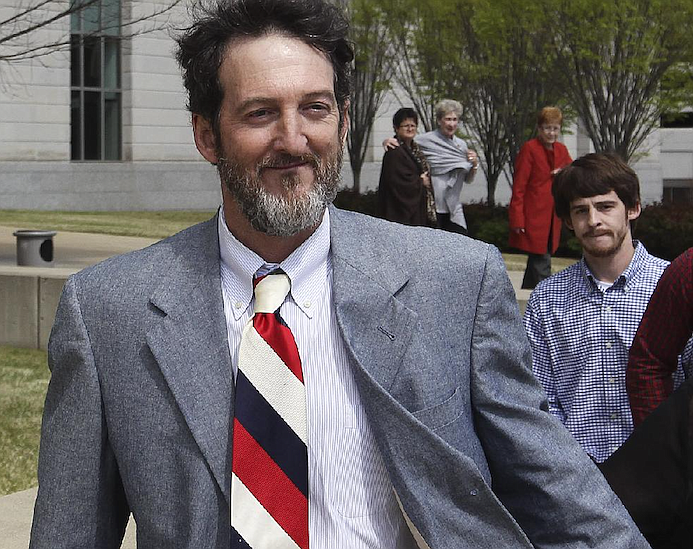 Baker, 64, a former political fundraiser from Conway and past chairman of the state Republican Party, is accused of serving as a middleman in an effort to bribe Maggio.

Baker is accused of bribing Maggio to reduce a $5.2 million jury award against Greenbrier Nursing and Rehabilitation Center in 2013 following a lawsuit filed by the family of Martha Bull. Bull died two weeks after being admitted to a one-month rehabilitation stint at the center, owned by Michael Morton of Fort Smith. Morton has not been charged with a crime.

Maggio pleaded guilty to bribery in 2015.

Bearded, masked, shackled and wearing jeans and a dark t-shirt, Maggio was escorted Wednesday by federal marshals from a holding cell inside the courthouse into the courtroom.

"Do we have to have the handcuffs?" Chief U.S. District Judge D. Price Marshall Jr. asked Maggio's escorts, who then removed the handcuffs.

"I know I can depend on you to act right," Marshall said to Maggio.

Under Peters' questioning, Maggio walked jurors through his friendships with Baker and Arkansas Supreme Court Justice Rhonda Wood, and through the steps that resulted in Maggio's ruling to reduce the $5.2 million wrongful death award against Greenbrier Nursing and Rehabilitation Center to $1 million in July 2013.

"Is it a big deal to remit a verdict?" Peters asked.

"Had you ever remitted a verdict before?"

"No ma'am," Maggio replied, drawing out his answer.

Although Maggio said he had a legal basis to remit the verdict, he said other options were also available to the family of Martha Bull and to Morton to appeal the verdict or the remittitur order.

"You said you thought there was a legal basis to remit the verdict," Peters said. "Was that the only reason?"

Asked to elaborate on the nature of the bribe, Maggio said, "potential campaign donations."

Prosecutors have said Baker received a FedEx package July 9, 2013, at his Conway home containing $228,000 in contributions from Morton, $30,000 of which was intended for Maggio in the form of 10 $3,000 checks made out to each of 10 political action committees controlled by Baker.

Peters asked if Maggio and Baker discussed the Bull case or Morton between May 16, 2013, when the verdict was rendered, and July 10, 2013, when Maggio ordered the award reduced.

"I think he sent me a text or two about it," Maggio said. "We did have a couple of communications about Morton."

Regarding the communications about Morton, Maggio said Baker sent him messages telling him that Morton's support was secure and that Morton was paying attention to the Bull case.