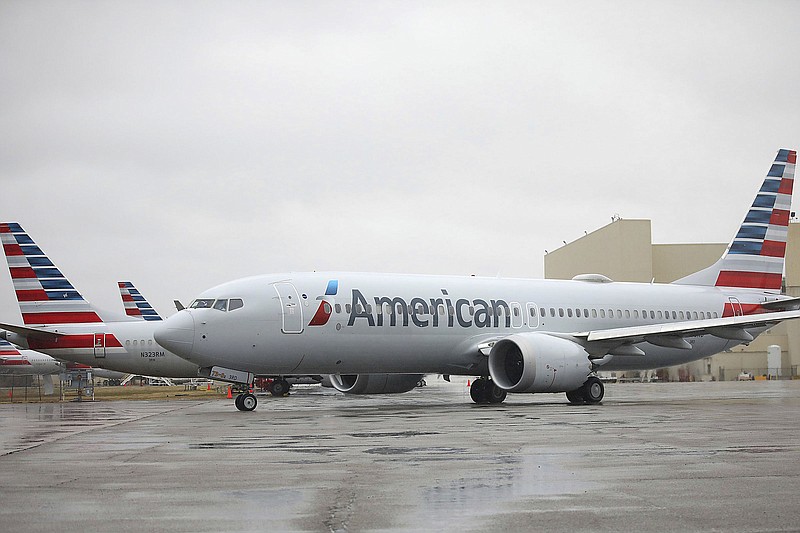 FILE - An American Airlines Boeing 737 Max taxis at Tulsa International Airport to fly to Dallas, Wednesday, Dec. 2, 2020, in Tulsa, Okla. American Airlines says itís running into fuel shortages at some smaller and mid-size airports, and in some cases the airline will add refueling stops or fly fuel into locations where the supply is tight. American said fuel supplies are being squeezed at ìseveralî airports, which it didnít name, mostly because of a shortage of tanker trucks or drivers. (Mike Simons/Tulsa World via AP, File)

The fuel needle is moving closer to "empty" at some U.S. airports.

Some smaller airports across the country are running out of fuel for commercial jets, and American Airlines is warning pilots to prepare for the possibility of not being able to gas up at some stops.

American Airlines says it's running into fuel shortages at some smaller and midsize airports, and in some cases the airline will add refueling stops or fly fuel into places where the supply is tight.

The airline said that the shortages showed up first in the West, where they could affect efforts to fight wildfires. They are now being reported in other parts of the country and will last through mid-August, according to a company memo to pilots on Monday.

"All airlines are continuing to experience jet fuel delivery delays at several midsize to smaller airports due primarily to constrained jet fuel transportation logistics, including a shortage of truck drivers, a shortage of fuel trucks and in some select cases, pipeline allocations," said the memo from John Dudley, American Airlines flight operations managing director.

American said that it is not experiencing any flight disruptions because of the fuel shortage, but the airline is encouraging pilots to conserve fuel when possible, such as using a single engine to taxi.

American also may ask pilots to make stops to refuel or to ferry in extra fuel to ensure planes have enough for their next takeoff.

Large airports such as Dallas/Fort Worth have their own dedicated pipelines pumping in fuel. But airports in places like Bozeman, Mont., and Jackson Hole, Wyo., depend on truck drivers to transport fuel from terminals, said Patrick DeHaan, a senior analyst with GasBuddy.com.

"It's a sign of the times that gasoline demand is surging and there isn't enough truckers," DeHaan said.

The trucker shortage first hit automotive gas stations, but now it's trickled down to airports, too, he said.

After Fresno Yosemite Airport in California reported some fuel shortages last week, Nevada's Reno-Tahoe International Airport said Sunday that "many airports in the West are experiencing fuel shortages" and told customers to check with airlines before flying.

Delta Air Lines said Reno is the most affected place. The airline said pipelines have been devoting more space to gasoline and diesel and less to jet fuel during the pandemic. Nevada politicians worry that the situation could limit the flow of tourism dollars.

Southwest said the fuel situation hasn't affected its flights, but it has added more fuel on some planes to limit the amount needed at airports with shortages.

Trade group Airlines for America said it is talking to federal authorities and pipeline operators about the situation.

The jet fuel supply is being taxed by a strong recovery in travel, which means more planes in the air. U.S. air travel has reached about 80% of its pre-pandemic levels, with about 2 million people a day are flying in the U.S., double the number in early March.

The gas supply problems aren't likely to let up for two or three weeks when peak summer driving and airplane travel season tapers off, DeHaan said.

The American Airlines memo to pilots was reported earlier by CNBC.

Airports and airlines occasionally report fuel shortages during extreme circumstances, such as refinery and pipeline shutdowns from a hurricane threatening Florida or the Gulf Coast. There were some isolated airport fuel shortages when the Colonial Pipeline shut down in May, and some American Airlines jets did have to make extra fueling stops.

Information for this article was contributed by staff members of The Associated Press and by Kyle Arnold of The Dallas Morning News (TNS).